You are here:Home » Euromil News » The Use of Military Forces for Internal Security Tasks 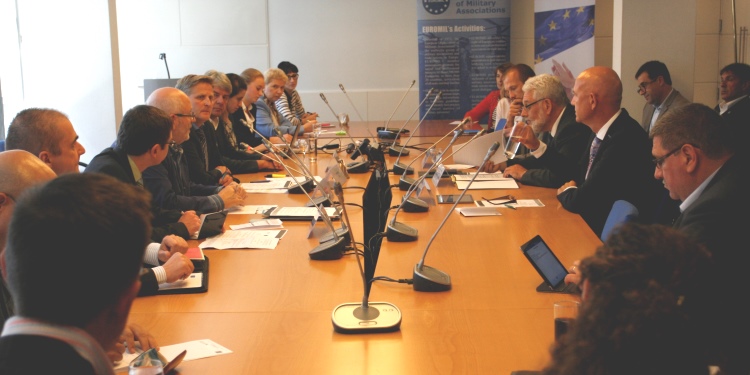 On 27 September, EUROMIL and CESI jointly organised the 14th edition of CESI@noon on the topic of “The use of military forces for internal security tasks”.

The President of EUROMIL, Emmanuel Jacob, introduced the topic by highlighting the changed nature of military missions. Recent terrorist attacks in different European countries have changed the security situation and demonstrated the blurring lines between internal and external security. More than ever before, events outside Europe are having an impact on national security of European states. Politicians in many European countries reacted quickly on the manifold challenges and deployed military personal inside the country to protect public spaces, buildings and offices, to support the police, etc…

The Secretary General of CESI, Klaus Heeger, pointed to the main questions these internal deployments of military personnel raise: Under which conditions is the deployment of military personnel inside the country legal? Which specific tasks may be performed by the military and which not? Is the military trained and equipped to perform police-like security tasks? If not, which additional training is necessary?

Colonel Erwin Hoogland from the Dutch Ministry of Defence explained the particular situation in the Netherlands, where the police can request support from the military, and the military itself has military police branch. He elaborated on the legal aspects of this construction and emphasized that soldiers are not allowed to perform police tasks such as arresting people, if not under the supervision of a police officer.

Captain Lars Scraeyen from the Belgian Royal Higher Institute for Defence stated that the law in Belgium strictly separates two kinds of homeland operations the military can execute. On the one hand there are safety operations (mostly to react on unintentional catastrophes) and on the other hand there are security operations (to deal with intentional catastrophes). Police forces can ask for military support when they lack capabilities or manpower to respond to a certain situation. Just like in the Netherlands, military forces – if assisting police forces – are legally not entitled to perform law and order tasks. The final responsibility over their deployment lies with the Minister of Interior.

Mr. Thomas Sohst from the German Armed Forces Association (DBwV) explained the important historical distinction between internal and external security (forces) in Germany. The new White Book on Defence presented in summer 2016 foresees however joint training of military and police, to enable both forces to effectively work together in emergency situations. Mr. Sohst warned against an overreaction of the security forces as this could just be the intention of terrorists. He therefore advocated for a calm and rational approach as well as a clear distinction between internal and external security (forces).

During the questions and answers session, a lot of interesting issues were raised:

Panellists agreed that lessons have been learnt from past challenges. However, they pointed out that this is a very national process as States only learn effectively from their own history: Lessons learnt in other countries cannot easily be copy-pasted since there will always be cultural, legal and political differences.

Governments need to communicate decisions in an effective and transparent manner. While it is always easy to step up the presence of security forces, population might consider a downsizing with critical eyes. Especially when emotions and personal threat assessments are involved, transparent communication of governmental decisions is essential.

Despite the national differences the participants described during the event, their “wish lists” for the future were considerably similar. They hope to see more cooperation between the different security forces: Joint training and education would enable the lower and middle ranks of the different forces to get to know the mind-set and special situation of the others. Security measures discussed in an interdepartmental dialogue and jointly decided upon at the top-level would enhance the effectiveness and acceptance of the measures taken.

In his closing remarks, Gerrit Schlomach, Parliamentary Assistant to MEP Gahler, welcomed the common ground identified during the discussion. He raised the question whether there is a role for the European Union to play which would go beyond being a platform for exchange of best practices. In this context he pointed to the report on a “European Defence Union” currently under discussion in the European Parliament, where the social dimension of security should be highlighted as well.