You are here:Home » Euromil News » Inclusive Security Forces Discussed at the OSCE HDIM 2016 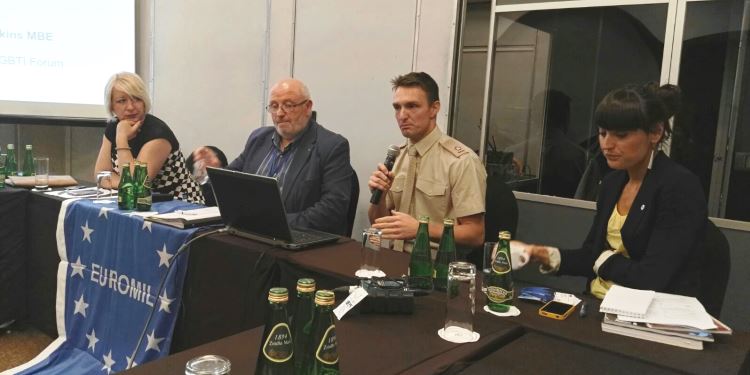 On Wednesday 28 September 2016, EUROMIL organised a side event on “Inclusive Security Forces”, in the framework of the OSCE Human Dimension Implementation Meeting (HDIM) 2016 in Warsaw, Poland.

OSCE participating States have committed themselves to ban discrimination on any ground (Copenhagen 1990). The principle of non-discrimination as well as the right to privacy are enshrined in a number of international human rights instruments. However, while some OSCE participating states have adopted laws and policies to promote equality and non-discrimination based on sexual orientation or gender identity in the security sector, others are still reluctant to recognize equal rights to LGBTI people and sometimes ban their access to security forces.

This side event explored the current situation with regard to the human rights and fundamental freedoms of LGBTI people in the security sector across Europe and discussed experience and best practices as well as the role of professional associations in promoting LGBTI equality and acting towards an inclusive security sector. The panel discussion had a particular focus on the armed forces.

The President of EUROMIL, Emmanuel Jacob, opened the meeting and gave a general overview of LGBTI issues in the security sector – with a particular focus on the armed forces – and how to tackle them. He presented the work of military associations in defending the human rights and fundamental freedoms of military personnel. “LGBTI rights are human rights and human rights are universal, inalienable, indivisible and interdependent. Everyone is entitled to fully exercise its right, without discrimination and on equal footing” Emmanuel Jacob argued. “LGBTI people deserve the best living and working conditions, as any other citizen. The security sector should not be exempted from non-discrimination and equality policies” he added.

Ewa Sapiezynska, Human Rights Officer at the OSCE Office for Democratic Institutions and Human Rights (ODIHR), focused in her presentation on international standards and best practices in the OSCE region, highlighting the OSCE mandate on non-discrimination and intolerance.

Major Damian Jenkins, British Army’s neurologist and former Chair of the Army LGBT Forum, presented the army LGBT forum and went through the UK military journey in LGBT diversity and inclusion. He explained how LGBTI issues are addressed. The UK is one of the best examples in terms of LGBT equality and inclusiveness in the armed forces. The UK was ranked third on the LGBT Military Index established by the Hague Centre for Strategic Studies (HCSS), just behind New-Zealand and the Netherlands.

Last but not least, Helena Vukovic, Retired Officer from the Serbian armed forces, gave a personal statement on her situation. Helena started her military career in 1996. She had an outstanding officer’s career until things changed in 2001 when she was arrested because she was wearing a skirt in the street. She was detained in a psychiatric hospital and had to pass some tests. In 2014 she was forced to retire from the Serbian armed forces when she started her transition to become a woman. Her personal statement made very clear that a huge difference exists between legislations in place and armed forces authorities’ mindset.

At the end of the discussion, it was concluded that some OSCE participating States continue to ban access to the armed forces to LGBTI people with the argument that having them serving will affect the moral and loyalty of troops. However, experience has shown that having diverse armed forces, including LGBTI people, does not affect the moral of the troops, unit cohesion or operational effectiveness. On the contrary, countries that adopted inclusive policies and promoted diversity in the armed forces have highly benefitted from this change of culture and education towards equality. The British case presented by Damian Jenkins is a good example.

EUROMIL would therefore like to call on OSCE participating States to lift the ban on LGBTI people serving in the armed forces and to those that already did it, adopt non-discrimination, equality and inclusion policies in their security sector.