You are here:Home » Euromil News » The Right to Strike: The Cat is Out of the Bag! 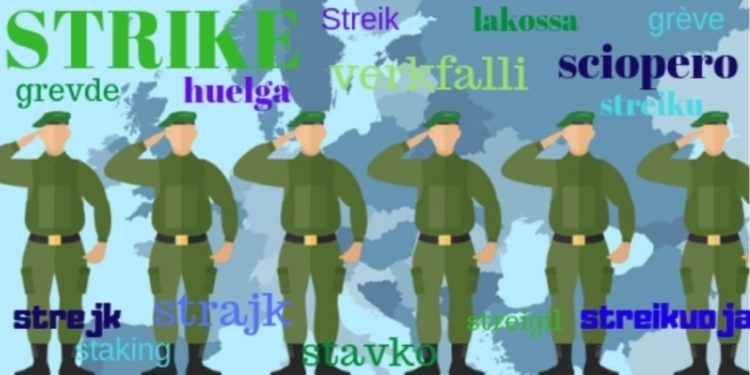 The question however was how long it would still take before the right to strike really becomes an issue among military personnel and their trade unions? When EUROMIL lodged a complaint at the European Committee of Social Rights (ECSR) against Ireland for violating Articles 5 and 6 of the European Social Charter as regards the rights of Irish military personnel to organise and bargain collectively, the main focus of the complaint lay on the fact that our Irish colleagues could not form or join trade unions defending fully their rights as soldiers/workers. That also Article 6§4 of the European Social Charter has been raised, is because EUROMIL believes that the different paragraphs of Article 6 form a full package of rights. Anyway, in EUROMIL’s case against Ireland, the ECSR did not see a violation of Article 6§4 which concerns the right to strike.

However, the ECSR adapted its opinion when looking at the complaint of our colleagues of CGIL against Italy. In this case, the ECSR remains of the opinion that trade union rights should not be denied to military personnel and that, just like Ireland, also Italy violates Article 5 and a part of Article 6 of the Charter. The ECSR used strong arguments to motivate the decision on trade union rights in the military. Nevertheless, the ECSR decision on Article 6§4 concerning the right to strike, came out of the blue. For the ECSR the right to strike is intrinsically linked to the right to collective bargaining representing the most effective means to achieve a favourable result from a bargaining process. Therefore, the Committee is of the opinion that restrictions on this right can only be acceptable under specific conditions. Such restrictions may only be in conformity with the European Social Charter. The least that I can say, is that this is an unexpected outcome which will influence the future discussions on trade unionism but especially on the social dialogue in our armed forces.

And now? Soon the Committee of Ministers will discuss the decision and can adopt a resolution or a recommendation on the issue. However, what the Committee of Ministers cannot do is reverse the case as reported to them by the ECSR. Therefore, the Italian case is an important precedent for all European armed forces. Together with the Irish case it can be used in all these countries that anno 2019 still deny the fundamental right to form and join trade unions and give them the opportunity to participate in collective bargaining leading towards binding agreements. Based on the clear violation of Article 6§4 in the Italian case, the discussion may be opened on the right to strike in all European armed forces. As already stipulated, restrictions are possible, but it must be clear that an absolute ban is out of the question!

Should this be seen as a call on the military to go on strike all over Europe? Not at all, but it is a clear message towards our governments that real military trade unionism in the armed forces can no longer be denied and should be taken seriously.