You are here:Home » Members news » Bringing Defence Issues to the Public’s Attention 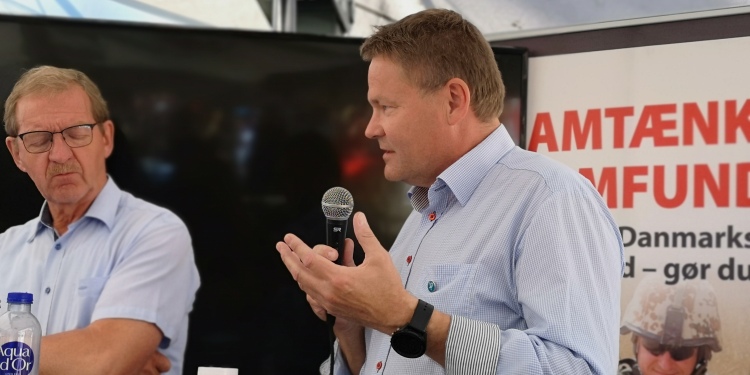 It is important that the public relates to the armed forces, just as they relate to other institutions in our society. CS wants to have a public discussion of, what the Danish defence can and cannot do with the current size and budget.

In June, the small Danish island of Bornholm hosts the annual public meeting “Folkemødet”. It is an event stretching over 4 days with lots of public debates, and a great opportunity for the general public to meet politicians and opinion leaders eye to eye. It is also an opportunity for unions such as CS to bring attention to defense issues and the working conditions of our members.

– The work pressure on the defence personnel becomes bigger and bigger. We see that the Navy gets more and more sailing days in a year. The Air-force is forced to put aircraft on the ground because they don’t have personnel to service them. We are pressured in all areas of the defence, and although the soldiers would like to, they cannot be in more places at once and that is cause for great frustrations, argued Jesper Korsgaard Hansen.

CS will bring up issues with the new minister of defence

Denmark had government elections in the beginning of June, where we selected a new prime minister and members of government. During the 4 weeks long election campaign the politicians debated about both big and small matters in our society, but there was very little debate about the defence, its many tasks and the work conditions of the defence personnel.

During the election campaign CS president Jesper Korsgaard Hansen criticised the neglect of the defence issues in the political online magazine Altinget:

– The politicians seem to neglect the defence and security policy during the election campaign. And that was also true of the recent election to the European Parliament. This may be because the Armed Forces have started a new settlement period, and that it will take years before negotiations have to be resumed in the area. However, the agreement does not address the challenges with solving many tasks with a minimum of personnel, while building up a new defence and having to prepare for new equipment. Defence and security policy must act on the political agenda if we are to be able to ensure the Danes’ welfare and security in the future. It is in our common interest, Jesper Korsgaard Hansen argued.

As soon as there is a new government in place in Denmark, CS will set up meetings with the new minister of defence and the members of the defence committee to address the issues and challenges of the Danish defence personnel.