You are here:Home » Euromil News » Mission Critical – Inclusive Leadership for the Security Sector 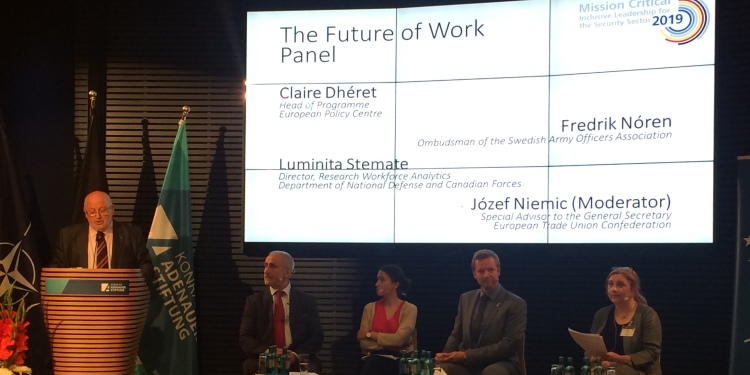 From 18-20 June 2019, the German Marshall Fund, WIIS.de, Deutscher.Soldat and EUROMIL organised  the 5th edition of the “Mission Critical – Inclusive Leadership for the Security Sector”, which took place in Berlin, Germany.

The first day was organised by the German Federal Ministry of Defence and hosted by the Canadian Embassy in Berlin. High-level keynote speeches by the Canadian Ambassador to Germany and Special Envoy to the European Union and Europe, as well as the German Federal Minister of Defence and the Chief of Defence of the Bundeswehr kicked-off the day. Transatlantic visions of diversity were discussed by representatives of the military, the police, civilian personnel as well as academics and think tank and industry representatives.

The second day, hosted by the Konrad Adenauer Foundation in Berlin aimed at looking towards the future, analysing big trends in both, demographics and foreign policy. In this context, the panel on the “Future of Work” which was organised by EUROMIL fit in perfectly. Understanding that both, the workforce and the nature of the work will change considerably over the next decades, the participants discussed the implications of changing demographics and new technologies on military personnel. Claire Dhéret from the European Policy Centre (EPC) shared some findings of a study the EPC carried out for EUROMIL on the future of the military workforce, focusing on skills and competences. Fredrik Norén, from EUROMIL’s Swedish member SAMO brought in the trade union perspective and recalled that while an up-skilling of personnel is needed to be able to deal with advanced technologies, also the ethical and moral dimensions of remote warfare should not be forgotten. Luminita Stemate from the Department of National Defence and Canadian Forces shared some preliminary results of the NATO task group dedicated to analysing shortage occupations as well as modelling personnel flows. Jozef Niemic from the European Trade Union Confederation (ETUC) who moderated the debate, closed the session by remarking that while recruitment and retention need to be thought together, one should also not forget the currently serving personnel and think about training of the current force.

In the afternoon, different international cross-talks were organised simultaneously. EUROMIL’s President Emmanuel Jacob co-chaired a workshop on diversity and inclusion approaches over the life cycle, from recruitment to Veteran, together with James Dillon, Talent Acquisition Manager of the US Department of Defence. This cross-talk brought-up another important aspect of diversity, one that is in fact often overlooked: In many armed forces, career pipelines are very rigid. Promotions depend on the fulfilment of a very strict number of prior postings and experiences, with little flexibility for the individual personnel. This leads in itself to little diversity of thought in the higher ranks: As personnel served in the exact same functions which required to advance, their experiences will be rather similar.

The third day looked at cyber security, culture change as well as the important aspect of communicating diversity.

More information on the concept of the mission critical is available here.