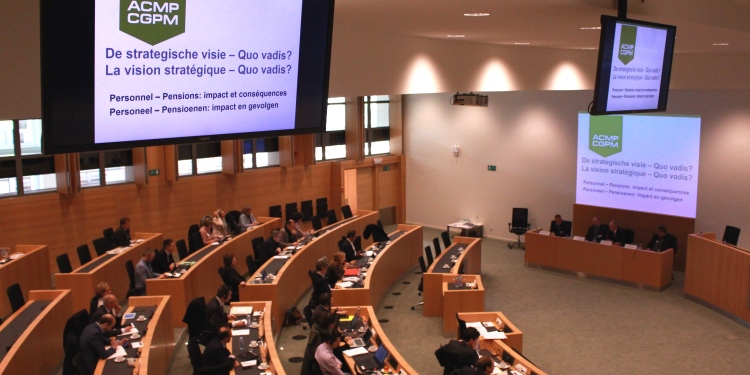 The Belgian government adopted a strategic vision for its armed forces last summer. This document lays down the missions, force structure and capital investments for the period until 2030. A few months after the publication of this plan, the government decided to dramatically increase the retirement age of the military with an average of 8.5 years. Which means that the Belgian military in the future will have to serve up to 64.5 years.

This measure has caused much discontent and led on 15 November 2016 to a great manifestation of nearly 10.00O soldiers in the streets of Brussels. Recently the military unions could also express their opinion about this strategic vision, the pension reform and their consequences for the military personnel in the Belgian Parliament.

The core of the argument of the military union ACMP-CGPM was:

The Belgian government has granted itself a certificate of ignorance. With its reform of the military pensions, the government has taken a measure that reduces the combat power of the armed forces by one sixth. Furthermore, its ability to contribute to internal security shrinks with 40%. This happens at a time where the security threats and the uncertainty were never greater the past 25 years.

3.5 months after the approval of the strategic vision, the government of prime minister Michel has completely shaken up some of the foundations of the defence long-term plan with the reform of the pension regime. In the timeframe up to 2030, three billion euro, being the increase in payroll due to the extension of the military careers, will not be available for investment in new equipment and for the readiness of the units. The Belgian armed forces will continue to evolve into a ‘Dad’s Army’, an old-men army.

Moreover, the only realistic alternative is even more questionable: a further reduction of the size of the armed forces to a ‘bonsai army’ that will be one third smaller than the already heavily slimmed current force.

It’s also a fata morgana to think that the retirement age issue can be solved – and therefore the strategic plan could be saved, with the solution proposed by the government to consider the military profession as a ‘hardship’ job. And thus compensate the increase of the retirement age with a ‘time bonus’. The total salary costs would still be 15% higher. And the issue of the military over 60, who simply can no longer meet the physical, mental and military-technical requirements of today’s missions, would still not be resolved. In addition, this kind of solution would just be ‘peanuts’ for the military, as this time bonus would be limited to a couple of months. This is only a small fraction of the intended extension of the career with 8,5 years. Furthermore, such a solution would not remedy the fact that the armed forces will provide decidedly less security to the Belgian citizens.

The strategic vision and the pension reform are completely incompatible with each other. Moreover, the latter makes the already precarious fiscal foundations of the long-term plan entirely implausible.

Hence, the military union ACMP-CGPM strongly advocates to modify this government decision. Instead it has proposed to recognize the special nature of the military profession and to adopt a specific pension system taking into account the security argument: being the only institution having the legitimate right to use violence to safeguard the territorial integrity and to protect Belgian citizens and the interests of the Belgian society, the military has the collective responsibility to perform its duties in every situation and whenever the government calls upon it. Furthermore, everything else than mission success is not an option for a defence organisation. These responsibilities imply the indispensable requirements of physical and mental fitness, which cannot be met by human beings elder than 58. Consequently, 58 instead of the current 56 years should become the new retirement age for the military personnel.

The original version of the article is available here in Dutch and French. For more information please contact ACMP-CGPM.