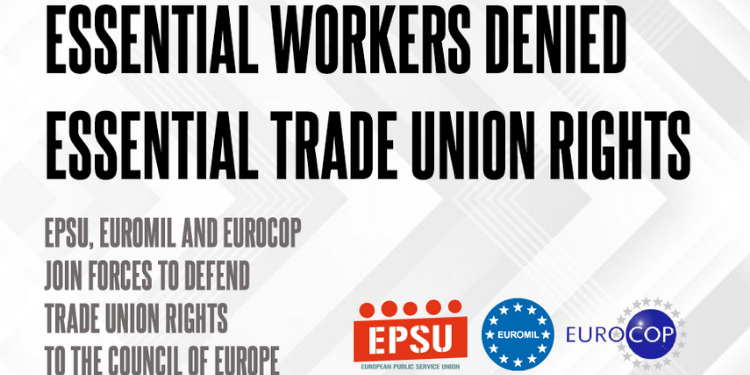 On Thursday 22 September 2022, EUROMIL, EPSU and EuroCOP held the final conference as part of the project on Strengthening and Defending Trade Union Rights in the Public Sector in Skopje, North Macedonia. The conference was the final event of a two-year, European Commission-funded project that has been investigating the challenges faced in protecting and strengthening the rights to organise, negotiate and take collective action for public sector workers. It entailed, other than the final conference, five regional meetings that focused on trade union rights situations in different countries.

In the project, the three European Trade Union Federations closely worked together to defend and promote trade union rights, resulting in a submission of a joint report to the European Committee of Social Rights of the Council of Europe. The report, compiled by a team of researchers led by the University of Ghent, provides an overview of the bans and limits imposed on public service workers across Europe. The conference opened with a welcome from EPSU, EuroCOP and EUROMIL.

Mr Jan Willem Goudriaan, EPSU’s General Secretary, addressed the participants by highlighting that, now more than ever, it is of the utmost importance to guarantee the rights of persons working in the public administration. He reflected on the future of the EU with respect to social rights, underlining the importance of collaborating for guaranteeing social justice. In this matter, the Directive on Minimum Wage is a steppingstone in the fight for social rights. However, police and military are often not covered by collective bargaining.

EuroCOP’s President, Mr Calum Steele, delivered his opening speech by stating that, in these times of uncertainty, concrete actions are required so that the rights obtained so far are not restricted. For this reason, using best practices is necessary.

Mr Emmanuel Jacob, EUROMIL’s President, highlighted the importance of the close cooperation of the three federations, as a crucial step to obtain more recognition. “This project brought us together. The result will be on the table for the upcoming months, continuing this work to understand that we are all workers together. The endpoint is that all workers should be represented and be at the table to bargain collectively, to defend their working conditions and their families. Collaborating in the trade union world means ensuring that military personnel have trade union rights in as many countries; collective bargaining is important, as we need to have an instrument to react.”

Following these introductions, Mr Darko Dimovski, President of the Federation of Trade Unions of North Macedonia, highlighted that so far, we have increased the awareness and knowledge of trade union rights in the public sector fruitfully. Nevertheless, many issues are still existing, especially now with the rising cost of living, which does not bode well for public workers.

Mr Artem Tidva from EPSU gave a detailed account of the situation in Ukraine and shared an update on the work of trade unions, where phenomenal efforts are being made. Mr Tidva’s solidarity message was followed by Mr Henrik Kristensen, from the Council of Europe, stating that certain rights cannot be absolutely limited, as it is not proportionate in a democratic society.

The following part of the conference consisted in the presentation of the project research findings by Mr Alexander De Becker and Ms Lissa Nissen. Firstly, a broad overview of the European and International standards on trade union rights was given, followed by a general presentation on the three fundamental rights: the right to organize, the right to collective bargaining and the right to take collective action. Subsequently, the trends in different countries for each right and the main problems arising from their limitations were showcased. The report can be found here.

Attendees then heard from Mr Jacob, who provided a perspective on the matter for military personnel, giving a particularly interesting insight into specific countries. In Ireland, there is a right to join trade unions, however, no real right to collective bargaining exists, even though in the last years there have been improvements. In Portugal, trade union rights are existing but serve as an empty box since the right to collective bargaining is denied. In this matter, it was highlighted that EUROMIL has a pending collective complaint.

The second part of the conference focused on the topic of strengthening national collective bargaining rights via EU directives and sectoral social dialogue. The speakers included Mr Lorenzo Repetti, Senior Advisor at ETUC, and Ms Diana Crumpana, from the Social Dialogue Unit of the European Commission, who talked about the collective bargaining rights in the Adequate Minimum Wage Directive. It was remarked how, after intense discussions, some main requests were delivered by ETUC, such as an adequate minimum wage for all and the right to collective bargaining. Positive results have been achieved through the efforts of all the various organizations. The results are not a panacea; however, they send an important political message. It is the first time that the EU promotes collective bargaining, therefore it is important to prohibit state interference against unions and their members, and to call for effective and concrete actions for the implementation of the directives.

A specific reference to the Transparent and Predictable Working Conditions Directive (TPWC) and strengthening national and European social dialogue was carried out by Ms Crumpana, and Ms Nadja Salson, Policy Officer at EPSU.

It was remarked how, during the pandemic, a pivotal role was played by the social dialogue. Therefore, measures should be taken to promote it and strenghten it in member countries, for instance through the modernizing of the structure of the dialogue itself and supporting social partners in decision-making processes. The TPWC foresees initiatives for social dialogue in Europe and recommendations to be proposed to individual states: Ms Salson focused on the potential for exclusions of a certain sector of workers from its remit by underlining the importance of avoiding the use of exemptions provided by the Directive. Any exemptions must be as limited as possible and based on clear, transparent, and objective grounds.

Following on from these presentations, those in attendance had the opportunity to participate in different working groups, in which insightful discussions were sparked through a set of questions on issues both on the national level and the European one. Participants had the opportunity to share their national experiences and best practices, restating the existing issues with trade union rights. Some EUROMIL member associations participated in sharing their national experiences. For Greece, Mr Dimitrios Rotas highlighted how legal possibilities were exploited to obtain social rights for military personnel, especially through court. For Portugal, Mr Antonio Lima Coelho talked about how special events led to the adoption of a package of laws that allows the right to demonstrate. In both cases, there was always a strong support from EUROMIL.

The conference allowed for an engaging and open discussion on the realities of trade union rights across Europe and was closed with the endorsement of the EPSU-EuroCOP-EUROMIL Next Steps document: a collective document that, most importantly, creates momentum and draws public attention to the commitments made and to the importance of keep monitoring the transposition of the TPWC in the different countries to avoid unjustified uses of exemptions.

Finally, the event was rounded off by remarking the major lessons learned from the project as well as steps to be taken at the national level and at the EU level. These steps are needed to pave the way forward for a better future for workers in the public sector and for continuing the collaboration between the federations through common goals.

The project page can be found here.