You are here:Home » Highlight post » An overview of the year’s developments in EU defence, and the participation of EUROMIL’s President at EMI European Chats

An overview of the year’s developments in EU defence, and the participation of EUROMIL’s President at EMI European Chats 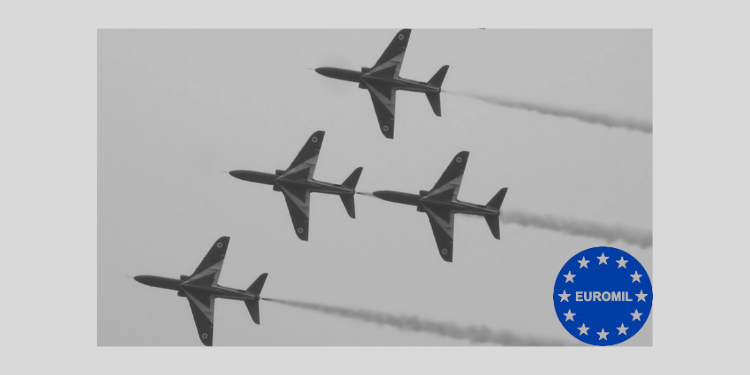 On 12 December 2022, the President of EUROMIL, Emmanuel Jacob, participated at the European Movement International (EMI) European Chats, to discuss current geopolitical issues, as the war in Ukraine, the strengthening of the EU common, security and defence policy (CSDP), climate change and the Conference on the Future of Europe (CoFoE).

The President underlined that since February, EUROMIL has been closely monitoring the situation in Ukraine, and supported Ukraine in a direct way. First and foremost, the crisis affects Ukrainian citizens in such a severe way, but there also indirect consequences for Europe. In this regard, it is important to mention that the war has influenced the EU CSDP; the Strategic Compass was planned before the start of the war, but it is uncertain whether it would be in such a form if not for the current geopolitical environment. The strengthening of EU’s defence policy also impacts the military and hence EUROMIL members.

Concerning the CoFoE, the President stated that it is important for the Conference not to turn out to be just a listening exercise. The debate between the European Parliament and the Council is now concerning the possibilities for treaty change; EUROMIL welcomes such discussions but the focus should also be on implementing the citizens’ recommendations under the current treaty framework. The Treaty of Lisbon has not been used yet at its full potential. Besides,  the  CoFoE recommendations also include the creation of a Commissioner for Defence. A development that EUROMIL hopes to see in the next Commission, as well as the SEDE becoming a fully-fledged committee. In that way CSDP will advance its legitimacy.

To continue, the President of EUROMIL also underlined that the military is frequently supporting civilian operations on climate change incidents, as in fighting fires (Greece) and floods (Germany, Belgium). The real question is whether are the people from the Armed Forces really equipped and trained to deal with such tasks. However, most of the times the answer is negative. Thus, it is important that this situation will not become an ad-hoc one, but it should be organised. To provide an example, colleagues from Australia have informed EUROMIL that they plan to create a specialized force composed by reserve personnel able to deal with climate related risks. In Europe, such a force can be covered under an EU framework.

Overall, 2022 has been characterised a year of European defence, where many developments took place. The adoption of the EU Strategic Compass and the NATO Strategic Concept are the different side of the same coin; the strengthening of the Euro-Atlantic area to be able to respond to current and future challenges and crisis.

One important element of the Strategic Compass is the creation of the Rapid Deployment Capacity (RDC), which will be constituted with up to 5000 troops for stabilisation, evacuation and rescuing operations and it will be fully operational in 2025. The common training exercises of the participating soldiers will start in 2023 and it covers the land, air and sea domain, and this constitutes one big difference with the EU Battle Groups (EUBG) that were only focusing on land capabilities. Besides, the financing of the RDC poses a question that remains to be answered, EUROMIL believes that the European Peace Facility (EPF) should support the capacity or become part of the EU budget.

The quantity of RDC is also not an improvement (5000 troops), hence it is important that gradually the size of the capacity should grow to achieve even more tangible results in terms of capacity to react quickly to crisis and increase preparedness. The Strategic Compass also entails that by 2025 the Military Planning and Conduct Capability (MPCC) will be able to plan and conduct: all non-executive military missions two small scale or one medium-scale executive operation(s) and live exercises. In this regard, MPCC needs to be a full-fledged military strategic Headquarter to control the RDC. The force should also be interoperable, with high-end capabilities and able to be deployed in short term. To provide an example, in Afghanistan during summer 2021, such a force could have assisted in the citizens evacuation.

It should also not be forgotten that military personnel are the ones that will make the RDC works; EUROMIL supports that soldiers who work, train and are deployed together, also enjoy the same working and social rights. In this regard, for EUROMIL the RDC could, in the long term, operate similarly to FRONTEX, where the agents are directly employed by the EU. This is not an argument for the creation of a European Army, but rather European soldiers that receive same working and social rights by carrying out the same tasks.

To continue, the Strategic Compass as a guiding document provides the Member States with the necessary actions to strengthen CSDP. More robust and efficient CSDP missions and operations, implementing the PESCO commitments, investing in defence and in the industry, and including climate efficiency in the military are the necessary steps forward. To elaborate more, the increased defence spending represents both an opportunity and a challenge. Member States will be able to modernize their Armed Forces, gain new capabilities and being able to adapt to changing environments. But on the other hand, if procurement of equipment and weapon systems is individual then the risk of fragmentation is high. Spending more is important, but spending together is a must. More common training exercises will also increase interoperability and effectiveness. If the approximately 80 goals of the Compass are fulfilled then the EU will become a strong player in security and defence, having the capabilities to respond to conventional threats and emerging ones. Cooperation with NATO and complementarity between the two organizations is also the essential. Gaining more autonomy means for the EU to be able to act when support is not available. Overall, EU defence initiatives, as PESCO, EDF, CARD, EDIRPA, the Hybrid Toolbox – if used properly – can provide CSDP with a new momentum. Of course strong political will is needed. In this regards, it is essential for policy makers not to forget the men and women that make these changes possible.

Concerning climate change, EUROMIL has tried to raise the issue through multiple channels. For instance, even from COP26 it signed a call by the Conflict and Environment Observatory (CEOBS) that called on governments to include military emissions on the discussions. On September 2022, EUROMIL also joined CEOBS call for action for NATO to count its military emissions, since reporting of emissions is essential in reducing them. EUROMIL has also become part of the European Climate Pact and is committed in promoting climate efficiency in the military.

Mitigating the military’s impact on the environment is urgent; through technology, innovation, education and common exercises among the Armed Forces, changes can be made in the way the military operates. In other words, the members of the Armed Forces should receive the proper education and equipment to reduce their environmental impact and increase their efficiency. To provide an example, climate change endangers security in the Arctic, where melting ice and extreme weather conditions pose significant challenges. In this regard, NATO is already exploring ways for military personnel to be able to defend, fight and survive in an Arctic environment through the “Cold Response” exercise. In the same direction the Strategic Compass also provides guidelines that will make CSDP missions and operations energy-efficient. By the end of 2023, in view of fully implementing the Climate Change and Defence Roadmap, Member States will develop national strategies to prepare the Armed Forces for climate change, while by 2025, all CSDP missions and operations will have an environmental advisor and report on their environmental footprint.

To conclude, 2022 can be described as successful year for European defence with the creation of tools and initiatives able to boost EU’s defence capabilities. For EUROMIL, 2023 should be a year where concrete results are visible. Taking into account the social and working rights of military personnel remain the ultimate goal of our organisation. In this regard, the RDC will remain a main focus for the next 2-3 years, since in 2025 there may be an update of the Strategic Compass, which could and should bring into the discussion the social factor of military in Europe.

Priorities of the Swedish Presidency of the EU Council