You are here:Home » Highlight post » 120th Presidium Meeting in Brussels 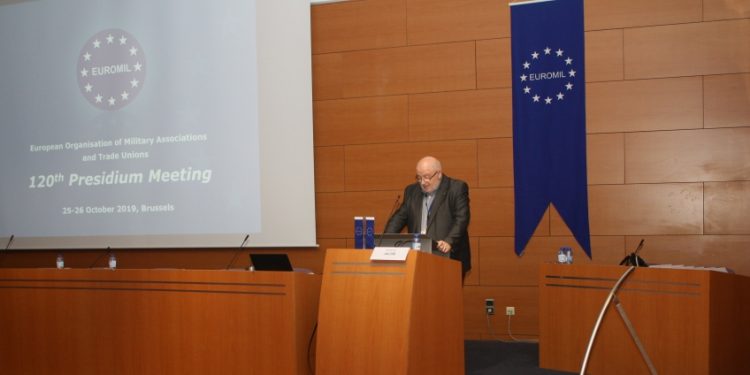 Emmanuel Jacob, EUROMIL President, opened the meeting with a speech looking back at what happened after the last Presidium Meeting in Bucharest such as the European elections in May and the formation of a new European Commission under Ursula Von Der Leyen. The President of EUROMIL highlighted some of the expectations of EUROMIL from the new Commission in the fields of security and defence, but also employment and social affairs as well as human rights and fundamental freedoms. The President also mentioned several cases in which courts or monitoring bodies confirmed that military personnel should be granted the right of association as well as trade union rights, including the right to collective bargaining. Finally, a minute of silence was held in honour of those who passed away and to remember Heinz Volland, one of the founders of EUROMIL. The video of the opening speech of the President is available here.

Ms. Lynch started by highlighting that military personnel are defending the rights of people all around the world and should thus be granted the right of association and trade union rights themselves. She made it clear that the ETUC will support EUROMIL and its members in the ongoing fight for full trade union rights. Besides this most basic right, Ms. Lynch also touched upon the importance of the right to collective bargaining as well as the protection of whistleblowers.

Captain Schumann presented the current and future security challenges in relation to the future of European defence and the need for modern, well-trained and well-equipped armed forces. In his presentation he mentioned that an integrated approach to EU security and defence is key, especially in the light of big power struggles as well as Brexit: In order to be in a position of strength, the EU will need to integrate different policy areas and levels into a coherent approach. He highlighted that in the military domain, capability development is key. Through several recent initiatives such as PESCO, CARD and the EDF, capability gaps can be spotted, and new capabilities can be developed in a coherent way. Through PESCO, new trends such as digitalisation and artificial intelligence could be used to modernize the armed forces and ensure interoperability. Interoperability on a technical, human and procedural level is indeed a key challenge to be addressed in the future. The video of the keynote speech of Captain Schumann is available here.

After the opening and keynote speeches, a panel was organised on “Military recruitment and retention and their relationship with salaries”. Peter Geluk, Partner and Managing Director at the Boston Consulting Group (BCG), emphasized that salaries can play a role in the decision of joining the military. However, the salary is not the only satisfier and a good salary is therefore not enough to retain people in the military. Mr Geluk also showed in his presentation that other factors such as “good relationships with colleagues”, “good work-life balance” and “learning and training opportunities” were more important to personnel than having a good salary. The video of the intervention of Peter Geluk is available here.

Frank Brundtland Steder, Principal Scientist, Innovation and Industrial Development, Norwegian Defence Research Establishment (FFI), shared his experience from Norway as well as the results of an EDA working group on recruitment and retention. Western armed forces are facing a double challenge: a demographic challenge which leads to changes and reduction in recruitment base in terms of quantity and quality and a strategic challenge with a stagnation or decrease in defence budgets. Mr. Steder echoed the findings of Mr. Geluk by pointing out that the salary plays an important role in recruitment and retention, but it is not a priority. In Norway for example, they are not focusing on wages but on equipment, which means that they attach more importance to having good equipment in good condition rather than paying large sums to their soldiers. The video of the intervention of Frank Brundtland Steder is available here.

Ltc Balázs Deme, Senior Personnel Officer, Permanent Delegation of Hungary to NATO, reflected on the situation in Hungary and explained in particular the “Zrínyi 2026 Home Defence and Military Development Program”: with this program, Hungary hopes to increase the strength of its military forces to 30,000 and create a voluntary reservist force of 20,000. In addition, the flexibility of the promotion system should be improved, the duty schedules reviewed and streamlined, and the military salaries maintained according to changes on the civilian labour market.

Flemming D. Vinther, EUROMIL Board Member, approached the issue from a soldier perspective. He said that soldiers, when they apply to the armed forces, know they will have to face poor conditions on missions abroad, and they are prepared for it. But they did not apply in the military to face these poor conditions at their home bases as well and that is one of the key reasons why some decide to leave the military. In order to retain military personnel, Mr Vinther underlined that soldiers should be treated properly by being granted the same rights as any other citizens, including the right of association. They should have access to medical care and benefit from the best working and living conditions. They should, in no way, be disadvantaged as compared to civilians. They deserve a fair pay and a dignified retirement.

The moderator, Maria Jepsen, Director of Research Department, European Trade Union Institute (ETUI), asked the speakers to zoom in on different country examples and compare their national situations. It became clear that recruitment and retention is a challenge to almost all European militaries, but that decent salaries are only a part of the solution. The role of military trade unions and associations in advocating for decent pay and working conditions cannot be underestimated.

President Jacob took the floor to thank the panellists and to officially launch the #FairDefencePayCampaign in which EUROMIL will advocate for a fair pay for military personnel.

In the afternoon, two presentations were made on current projects initiated by EUROMIL or its member associations. The first presentation focused on the new PDFORRA Medical Assistance Scheme (PMAS). Catherine Donohoe, General Manager, Commercial Unit, Health Service Executive (HSE), Ireland, concentrated on the origins and provisions of cross border healthcare. Damien Quigley, National Support Officer, PDFORRA, then addressed the development of the scheme and the benefit for its members as well as for PDFORRA as an organisation.

In the second presentation, Mihai Palimariciuc, Junior Policy Analyst, European Policy Centre (EPC), described the findings of the EPC report entitled “Preparing the Armed Forces for Disruptive Technological Changes” that had been commissioned by EUROMIL. The analytical report, which is now published, looks at the implications new technologies apply on the defence and security sector. The report is available here.

The afternoon continued with three simultaneous workshops, in which delegates discussed different topics of interest.

The discussion on “Whistleblowing in the Armed Forces” was led by Martin Jefflén, President of Eurocadres and moderated by Johan Öhlén, Board Member of EUROMIL. Mr. Jefflén informed EUROMIL member associations about the standards set by the whistleblower protection Directive, its shortfalls and how EUROMIL and its member associations can advocate for better protection measures during the transposition phase of the Directive through coordinated lobbying. The main issue of concern is the blanket exception on national security. Equally important is the need to ensure protection to whistleblowers who reveal breaches to public interests on issues of working conditions, non-discrimination as well as occupational health and safety.

The workshop on “Religion in the Armed Forces” was led by Erwin Kamp, Head of the Humanist Chaplaincy Service, Dutch Armed Forces, and moderated by Antonio Lima Coelho, Board Member of EUROMIL. Erwin Kamp presented the Dutch situation with the guiding question of “How to accommodate the religious and non-religious needs of military personnel in the Netherlands?”. He emphasized that nobody should be obliged to take part in religious acts. Nevertheless, also regarding recruitment and retention, chaplains play an important role, since they guarantee equal worship to all their soldiers but are at the same time trusted persons to whom soldiers can confide to as chaplains are not under the military line of command.

The discussion on “Conscientious objection to military service” was led by Gerard Guinan, General Secretary, PDFORRA and moderated by Thomas McCarthy, Board Member of EUROMIL. Gerard Guinan presented the situation in Ireland where professional military personnel is not granted the right to conscientious objection. EUROMIL, on behalf of PDFORRA, therefore launched a complaint at the European Committee of Social Rights (ECSR). Participants discussed the situation in their respective countries and welcomed the case, hoping that a positive decision of the ECSR could also lead to changes in their respective countries.

In the late afternoon and on Saturday morning, delegates discussed internal reports as well as the budget of the organisation. Delegates approved the update of the position paper on “Depleted Uranium”. The Presidium also approved the request of the Bulgarian association BUAFWA to prolong the observer status for an additional year and the request of the Serbian trade union NEZAVISNOST and the Greek trade union P.FE.AR.F.U. to become full members. The Lithuanian association KTGC was excluded. EUROMIL now counts 32 associations from 21 countries.

The next Presidium Meeting will be held in April 2020 in Lisbon, Portugal.