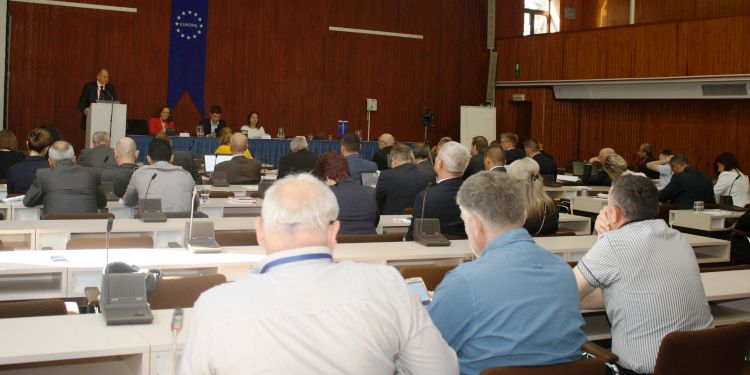 The President of EUROMIL, Emmanuel Jacob, welcomed the delegates in Brussels. He pointed out that the EU is visibly transforming from a soft power to an institution which increasingly cares about the security of its own citizens, e.g. by facilitating the military cooperation amongst its members through the PESCO project. However, it was stressed that besides this praiseworthy idea, the human dimension is so far not included. The President expressed the need to urge the European leaders to focus on the military personnel in terms of harmonizing working conditions and social protection.

The first keynote speaker, Lieutenant General Esa Pulkkinen, currently serving as the Director General of the European Union’s Military Staff (EUMS), expressed his appreciation towards EUROMIL’s work and highlighted the fact that as a member of the Finnish Officer Association he could always enjoy the support of this association. The General repeatedly underlined the importance of sharing and defending the European values on many levels, also in relation to security issues which are currently increasingly concerning EU citizens. The General highlighted that it is important to improve collaboration, and PESCO is one of the platforms that facilities it. As the EU is a soft power with a military dimension, it is able to secure the safety of its citizens and possess instruments to provide it, one of which is the EUMS. In the closing sentence, the General emphasized that the traditional roles in the military sector will not disappear, however, due to the changing conditions and demands, it is crucial to focus on the human factor.

The second keynote speaker, Chevalier Cleaves, Inaugural US Air Force Chief Diversity Officer, shared his thoughts on the importance of diversity and inclusion in different sectors, including the military. He highlighted that there are certain demographic and global realities that are encouraging leaders to understand the significance of diversity and ways of managing it.  He stressed that a successful leader should have a skillset that matches his or her role and the complexity of the modern world. He finished his speech by posing open questions, e.g. regarding the impact of the diversity and inclusion on achieving strategic goals.

The opening session finished with the projection of the video speech delivered by Marianne Thyssen, European Commissioner for Employment, Social Affairs, Skills and Labour Mobility. The Commissioner paid tribute to the men and women who are committed to the safety of European citizens and emphasized that everyone expects social Europe that cares and secures his or her economic and social future.  It has been also stressed that already existing Working Time Directive applies to all sectors and accommodates the need needs of specific activities such as the work of armed forces. M. Thyssen stated that the future of the military profession raises the questions about the effects of digitalization since artificial intelligence and new technologies will for sure have a huge impact on the military sector.

After the high-level keynote speeches, a panel was organised on the topic of “the future of the military profession” . The moderator, Thiébaut Weber, Confederal Secretary ETUI, opened the debate by pointing out how much the trade union discussion on the future of work and the labour market, and EUROMIL’s debate on the future of the military profession have in common. While artificial intelligence and modern technologies are certainly on the rise, the human dimension and the fact the it should be a human being making life and death decisions was emphasized. (Videos of the interventions of the panellists are available on youtube.)

The first panellist, Roger Housen, Representative ACMP-CGPM, reflected on demographic and social changes and their impacts on the military profession on the one hand and on military trade unionism on the other hand. The so called “Millennials” who are entering the labour market value work-life balance much more than previous generations, while at the same time being less interested in traditional hierarchies and bureaucracies. Military associations and trade unions have to take this into account and consequently also deepen their national and international cooperation.

The second panellist, Róisín Smith, Senior Research Fellow, Edward M. Kennedy Insitute for Conflict Intervention, Maynooth University, Ireland, presented the Gaming for Peace project. She highlighted that many training facilities are already in place for peacekeeping personnel, but that studies found a compelling lack of soft skill training for deployments abroad. Team work, cooperation, stress management and decision making in culturally different environments are however much needed skills. To train these in an interactive manner, the Gaming for Peace project seeks to develop a serious video game in which participants can train soft skills, receive immediate feedback and look at situations through the eyes of different persons (military peacekeepers, police forces, NGO representatives…).

The third panellist, Chiara Riondino, Policy Coordinator, B1 Employment strategy, DG EMPL, shared the European Commission’s perspective on the future of work. She emphasized that the EU institutions share the same analysis about the advantages and challenges of the future of work. While on the one hand there is a tremendous opportunity for development and growth, there are many legal grey zones on the other hand which require and urgent update of the regulatory framework. The Commission recognizes the added value of the human factor and the increased importance of workers representation in associations and trade unions to have their voices heard.

In the subsequent debate, many questions were raised, such as the need to recruit personnel which is physically and mentally fit for the changing nature of the military profession and the difficulties of training for the unknown. Thiébaut Weber summarized the debate by stating that the armed forces are certainly one of the best examples of a sector where human beings cannot be replaced by robots, which also is the proof that trade unions are still needed in the future.

During the afternoon, two presentations were organised to inform the Presidium Members about important topics: Alin Bodescu, Training Manager, European Security and Defence College (ESDC), presented the ESDC and its courses and training programmes (video available on youtube). Irina Bratosin D’Almeida, Gender Adviser, EUPOL COPPS, presented the findings of a study on “Women in CSDP missions” which was commissioned by the European Parliament (video available on youtube).

The day ended with three parallel workshop sessions in which the delegates discussed recruitment, equality in the armed forces and association points of contact in missions abroad.

The next Presidium Meeting will be held in October 2018 in Budapest, Hungary.