You are here:Home » Euromil News » United in Military Diversity – How to Accommodate Diverging Military Cultures 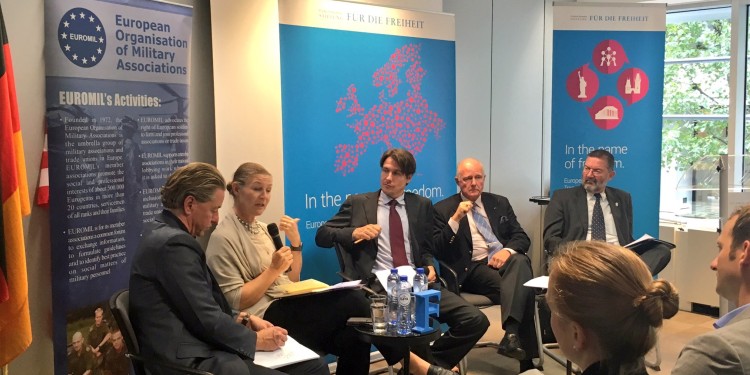 On 28 September 2017, EUROMIL together with the Friedrich Naumann Foundation for Freedom organised the first event in a tripartite series on overcoming obstacles on the way towards a European Army. The first event focused on the question how working together with military personnel from diverse national military cultures works in practice.

The moderator, Kai Küstner, the Brussels Correspondent of the ARD German Radio, opened the debate by bringing in the call of the French President Emmanuel Macron to create a common European strategic culture. He then gave the floor to the panellists, each of whom had a distinct perspective on military cultures and international cooperation.

Antonio Lima Coelho, the former President of the National Sergeants Association (ANS) from Portugal explained that even though the military helped to bring down the dictatorship and install democracy in Portugal, democratic rights such as the freedom of association are not at all widely accepted in the Portuguese military nowadays.

Flemming Vinther, President of the Trade Union of Enlisted Privates and Corporals of the Danish Army (HKKF) from Denmark clearly stated that he does not see a European Army being build any time soon. For this to happen, member states would need to show political will, leadership and trust towards each other to ultimately give up parts of their sovereignty.

Hubert De Vos, ret. Major-General and former Commander of the Belgian Land Forces, pointed towards a few conditions which are essential for making multinational cooperation work on the ground: A common language of which everyone has a sufficient command, common operating procedures, inspiring coalition leadership, extensive and innovative training, standardised equipment as well as an adequate level of risk sharing and a minimum of national caveats.

Charlotte Isaksson, Gender Advisor at the European Union External Action Service explained that military culture as well as the way gender questions are regarded are determined by national cultures and can often be (mis-)used for reasons of power (preservation). In this regard however, Mrs. Isaksson emphasized that gender integration be a positive example of how quickly cultures can change.

During the Q&A, panellists and participants discussed issues of military trade unionism, existing multilateral cooperation such as the EU Battlegroups and the Eurocorps as well as planned initiatives to enhance collaboration on a European level such as the European Defence Union and PESCO.

In his closing remarks, Emmanuel Jacob, President of EUROMIL, concluded that military diversity does not stand in the way of more European defence cooperation and integration as long as some fundamental principles (such as democratic rights for military personnel) are respected.