You are here:Home » Euromil News » Time For Real Action 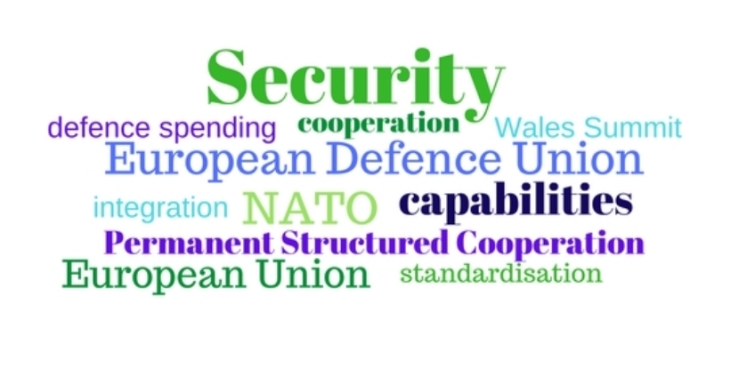 One cannot deny that it is becoming quite difficult to write something on the current situation that is valid for more than a few days or even hours. Especially the security and defence environment is changing rapidly. New scenarios for the future are discussed at an increased pace. However, two main topics are already on the agenda for some time: the 2% guideline at NATO level and the implementation of the Permanent Structured Cooperation (PESCO) at EU level. But also on these issues the news is hard to follow even if one tries to keep up to date.

Aim to increase defence expenditure towards 2%

The famous 2% guideline has been decided at the NATO Wales Summit in September 2014:

“Allies currently meeting the NATO guideline to spend a minimum of 2% of their Gross Domestic Product (GDP) on defence will aim to continue to do so. Likewise, Allies spending more than 20% of their defence budgets on major equipment, including related Research & Development, will continue to do so.
Allies whose current proportion of GDP spent on defence is below this level will:
– halt any decline in defence expenditure;
– aim to increase defence expenditure in real terms as GDP grows;
– aim to move towards the 2% guideline within a decade with a view to meeting their NATO Capability Targets and filling NATO’s capability shortfalls.”

Because most of NATO’s member states had not reached – and three years later still do not reach – the 2% guideline, the formulation to “aim to increase defence expenditure” and to “aim to move towards the 2% guideline with a decade” was carefully chosen. The NATO member states engaged themselves to improve their defence spending before 2024. Some of them gave clear signals that they take their commitment serious, others already made considerable efforts to reach the target and – let’s be clear – some remain in a very grey zone.

In the past, members of the US government already urged European countries contribute more to their own defence. The new US President is however voicing his concerns much clearer and in less diplomatic ways than his predecessors. At the occasion of the official inauguration of the new NATO HQ in Brussels on 25 May 2017, President Trump said: “Member nations are still not paying what they should be paying. This is not fair to the people and taxpayers of the United States.” NATO Secretary General Stoltenberg was giving a more positive outlook when he explained at a press conference on 28 June 2017 that “in 2017 we foresee an even greater annual real increase of 4,3 %”. This might be seen as a first indicator for a reversed trend, stopping the decrease of defence spending.

Last but not least, the issue is, or became, also a European Union issue. The High Representative Federica Mogherini had every right to declare at the Munich Security Conference that “the 2% debate on the defence spending is a NATO debate and it is for member states or allies in NATO to define their way. But if the European countries want to spend more and better, the only way in which they can do that is through the European Union.” Ms. Mogherini however also knows that NATO and EU have currently 22 member states in common and that each of these countries has only one set of armed forces and one defence budget.

PESCO, something else or nothing?

This leads automatically to the issue of European defence cooperation. Precisely because most EU member states are also NATO allies, all efforts in the field of European defence integration will complement defence cooperation within NATO. When launched, the PESCO will strengthen the European pillar within NATO and therefore also strengthen NATO. At the European Council on 22 June 2017, European leaders finally agreed to launch PESCO as foreseen in the Lisbon treaty and present a time frame for implementation within the next three months.

Of course, several bi- or multinational cooperation initiatives between European armed forces already exist. But the moment is there to accelerate the process. And some countries do so! Recently, Germany, the Czech Republic and Romania announced closer collaboration between their armed forces by integrating a Czech and a Romanian brigade into the German armed forces. Already before, two Dutch brigades joined the Bundeswehr. One joined the Bundeswehr’s Rapid Response Forces Division and another has been integrated into the Bundeswehr’s 1st Armoured Division. It seems strange that Germany is criticised to quietly build a European Army while in fact it is widely known that a European Army has no chance to be accepted by most of the European member states.

The moment has come for the member states of the European Union and NATO to move from words to actions! Unless European leaders are willing to continuously be blamed by one leader and at the same time be threatened by another one, they should take serious and concrete action soon!

EUROMIL will monitor the process closely and advocate that such progress goes hand in hand with the best working, economic and social conditions for the men and women in uniform that are the essential partner to make such reforms a success!