You are here:Home » Euromil News » The Same Duties, The Same Risks?

The Same Duties, The Same Risks? 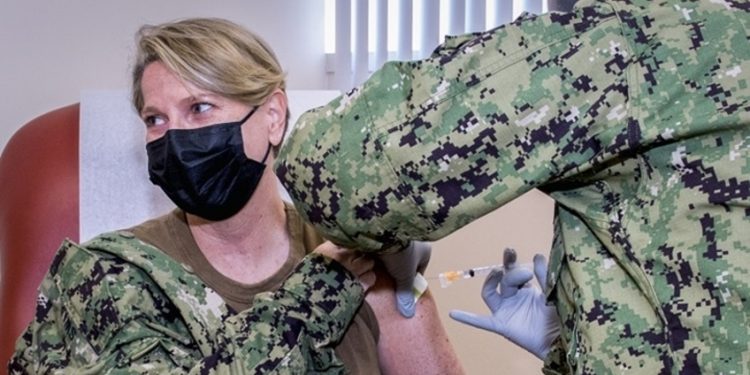 As the COVID-19 pandemic approaches one year since its initial outbreak, a glimmer of hope has appeared on the horizon: the rollout of vaccines across EU Member States, in December 2020, is a bright light at the end of what was an incredibly dark year.

Giving her official approval before the rollout of the vaccine across the EU, President of the European Commission, Ursula von der Leyen, said: “Today we add an important chapter to a European success story. We approved the first safe and effective vaccine against COVID-19. More vaccines will come soon. Doses of the vaccine approved today will be available for all EU countries, at the same time, on the same conditions. The upcoming European vaccination days will also be a great moment of unity. This is a good way to end this difficult year, and to start turning the page on this pandemic. We are all in this together.” Furthermore, Stella Kyriakides, Commissioner for Health and Food Safety, added: “Today we witness what can be achieved collectively when we work together in a strong European Health Union. A Europe that cares and that supports. A Europe that leaves no stone unturned.”[1]

Vaccines will be available for all EU countries, at the same time, and on the same conditions – a clear and significant demonstration of solidarity. While the same priorities were not present in every Member State, the situation was unspoiled considering the months of uncertainty and the subsequent speed at which vaccines were developed.

However, it cannot be repeated enough that the success of the vaccination strategy within the European Union and its Member States, does not mean the end of problems arising out of COVID-19. For many months to come, we may have to adhere to strict security measures in order to avoid, or at least minimise, another wave. It seems, however, that looking at the numbers published by both national and international services, a large proportion of people are yet to understand the dangers of contamination. This is despite the fact that most EU citizens are following national and international safety guidelines as close as possible.

EUROMIL’s attention was brought to a certain number of alarming media reports, highlighting cases in which contaminated soldiers were returned home from mission areas for the purposes of quarantining and further testing within their native country, and led to further investigation of the issue. I deliberately do not use the names of countries or armed forces here as I believe that the benefit of the doubt should be afforded, and the presumption made, that measures and guidelines are followed to the best ability and with the resources that are available. If it later turns out that this is not the case, I will not hesitate to say so.

As is customary in 2021, I conducted a search online for the vaccination strategies regarding soldiers on assignment abroad. Since this is generally under a NATO, EU, or UN mandate, it seemed natural to me that a strategy applicable to all participants would be available there too. Apart from numerous references to the deployment of military personnel around the world, providing assistance in one way or another to combat the pandemic, little was to be found. In addition, a 2008 NATO publication[2] reads as follows: “the aim of this publication is to provide information on national responsibilities for the vaccination of their forces, and national capabilities for vaccinations.”

The publication further emphasises, amongst other issues, that participating nations agree on a coordinated vaccine strategy so as to ensure personnel are adequately protected before deployment to a high risk area, and that each nation is responsible for the establishment of both mandatory and voluntary vaccination strategies. The ball is therefore placed in the court of the national authorities and we can imagine that it is the same situation for assignments under the EU or UN flag.

So we must ask ourselves: how will this continue over the coming weeks? Armed forces are subject to government decisions regarding national vaccination strategies. They do not have a say over who should be prioritised, the number of vaccinations made available, or when they are administered. Given the special technical measures associated with the current vaccine, such as transport, storage and temperature, we must question whether there are any vaccination plans in place for troops currently deployed abroad. For the near future, we can only hope that vaccination before departure is considered a high priority. In this regard, while the national strategy of Member States will apparently play a decisive role, there is yet to be a solution for the contingents currently deployed.

It is not my intention to merely criticise, but rather to highlight the urgent need for appropriate action to be taken to resolve this issue. Based on the principle that duties and risks of a similar nature require equal treatment, a European, NATO, or UN strategy for all deployed military personnel is both necessary and urgent. It is my view that it is inappropriate to continue to look towards national authorities, especially in the case of missions that are conducted under an international flag. The deployment of military personnel requires someone to take responsibility for the matter. If we are told that the virus does not discriminate between borders and nationalities, why should we consider the vaccination strategy to be any different?