You are here:Home » Highlight post » The Longest Journey Begins With a First Step

The Longest Journey Begins With a First Step 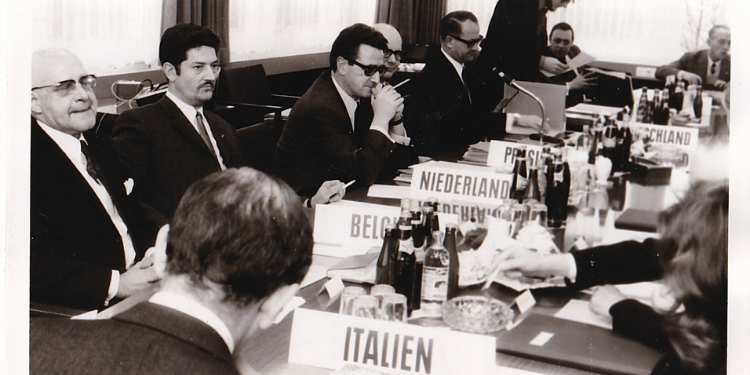 In a small town on the Moselle, the official foundation of the European Organisation of Military Associations was prepared.

Hatzenport is a small municipality on the Terassenmosel, which subsists on winemaking and tourism. Landmarks of the small village, with its approximately 600 inhabitants, are the Gothic church of St. John, visible from afar, and a 19th Century ferry tower.  In an idyllic location between Koblenz and Eltz Castle, the Bundeswehr-Sozialwerk, the organisation responsible for the social issues of the Bundeswehr, operated  the hotel “Mosella” – a simple house with a rustic atmosphere.  In this remote location, on 5 and 6 June 1972, the last organisational preparations were made for the official establishment of the European Organisation of Military Associations (EUROMIL).  The deliberations of the provisional EUROMIL committee focused on the management report which was jointly presented by President Christian Sørensen and Vice-President Heinz Volland, taking stock of the work carried out over the past one and a half years.

Time was of the essence; In December 1970, the founders of EUROMIL took on the task of preparing a constituent general meeting within two years of its establishment. The key point of the process was to determine the tasks and goals of the organisation, as well as the national and international points of contact. At its first meeting in Bonn in mid-March 1971, the provisional committee decided to contact all NATO defence ministers, the European Parliament and the mass media. It was equally important to win over additional professional military associations through talks and negotiations, in order to be taken seriously as representatives of the rights of soldiers across European democratic armed forces.

This turned out to be more difficult than expected once the initial feelings of jubilation had subsided. Despite all the expressions of sympathy, only a small number of the thirty associations that were invited to cooperate declared a willingness to join a European umbrella organisation. During the two-year founding phase, it became clear that even in the cooperative associations, the internal resistance had been underestimated.  In Luxembourg it was not possible to accept the idea of jointly representing the interests of different ranks. The Swedish and Norwegian associations, whose representatives  were initially enthusiastic about the idea of a common European organisation, also withdrew. The future EUROMIL President, Jens Rotbøll, who was involved in the negotiations on the part of the Danish association, attributed this to an unease within the Swedish and in particular the Norwegian associations as they were fearful of German dominance from the Bundeswehr Association.  Memories of the Second World War, 25 years ago at that time, were still alive for many members. In reality, there had been a concern about a dominant influence of the German association, which has a large and financially strong membership.  In order not to fuel such fears, the DBwV held back and campaigned for a EUROMIL Presidency who did not come from Germany, even if they did not want to completely rule out a German EUROMIL presidency for ever.

A breakthrough was achieved in September 1971, when the Italian soldiers’ association “Associazione Nazionale Autonoma dei Militari” expressed its desire to join EUROMIL after a meeting between its President and EUROMIL’s Vice-President Heinz Volland in Bonn. At the presidium meeting on 15 and 16 December 1971, also the Italian Air Force Officers’ Association joined. At this meeting, with the top representatives of ten associations from five European countries, it became clear how different the material and legal conditions were for the members of the armed forces even in the politically closely connected countries of “core Europe”. “In order to compensate for these differences and by submitting common proposals to the parliaments of the countries concerned and to support the cooperation already exercised in Europe in the political, technological and cultural fields”, according to the chairman Christian Sørensen, the cooperation of the organisation of European military associations, which by its own admission already represented the professional interests of more than 250,000 soldiers at the time.

The founding committee worked hard to establish further contacts; for example with the Council of Europe, the European Parliament and the defence ministers of NATO states. An expression of the political recognition of the organisation, which was in the process of being established, was made at the reception of the Presidium by the President of the German Bundestag and former Federal Defense Minister, Kai Uwe von Hassel. EUROMIL found an influential ally in Joseph Luns, the long-standing Dutch Foreign Minister elected Secretary General of NATO in 1971. At a later meeting, he underlined the importance of soldiers’ associations for the Alliance through the coordination and development of the material, social and ideological position of the members of the armed forces, thereby contributing to the preservation and improvement of the effectiveness and reputation of the armed forces. This means that a position was represented at NATO’s highest level that was by no means shared across all armies within the Alliance at that time.

Efforts to coordinate and bring together the soldiers’ associations were closely linked to the strengthening of the political unification of the Western European states. At the beginning of December 1969 and at a politically significant summit in the Hague, European Heads of State made far-reaching political decisions regarding the further development of cooperation, including on common defence. The political unification of Western Europe was seen as the prerequisite for a full European defence community. A year later, ten European NATO states adopted a joint reinforcement programme for NATO defence. In the history of the Alliance, this was the first purely European military joint achievement. Closer civil and military cooperation meant that official contacts developed into camaraderie among the “citizens in uniform” and friendships. Members of the armed forces across European states were now aware of the similarities facing all of them as they wrestled with professional, social and economic issues.

The social-liberal coalition in the Federal Republic of Germany, in power since 1969, attached great importance to European cooperation in the defence sector. The EUROMIL Presidium was not able to follow the optimism expressed in statements by the then Federal Chancellor Willy Brandt, according to which a kind of “EC soldier” (today called the EU-soldier) was conceivable as early as the 1980s.- Significant political and social differences between countries could hardly be reduced at such a pace. A willingness to find a compromise was nonetheless demonstrated by the member associations present in Hatzenport when EUROMIL’s draft statutes were composed and which were to be voted on at the first general meeting. Guido Daleman, who was elected Secretary of the Board at the first meeting of the provisional Presidium committee, had evaluated the initial draft statutes of the participating organisations and utilised his language skills. Born in Bruges (Belgium), he had completed his military service with the Belgian telecommunications force in the Federal Republic of Germany after his studies at the universities of Leuven and Ghent. He took over the coordination of the tasks and the organisation of the first General Assembly meeting scheduled for 13 and 14 September 1972, as well as EUROMIL’s Presidium meetings scheduled for 12 and 14 September.

The two-day retreat in Hatzenport initiated the last stage before EUROMIL was officially founded. Contrary to German ambitions to develop the joint umbrella organisation into a pacesetter for the political development of a united Europe, the Belgians, Dutch and Danes pushed for limiting themselves to representing the interests of soldiers of all ranks. The DBwV then withdrew an application for direct election of the members of the European Parliament.

Despite all the optimistic expectations of the new organisation, Heinz Volland pleaded for a realistic view: “We will have to proceed step by step. The important thing is to achieve what is possible and not through declarations, but through actions. All of us who want this Europe with all our hearts are called upon to do so.” One should not be discouraged by mistakes, obstacles must be overcome. Even if great success is not achieved immediately, the Chinese proverb applies: “The longest journey begins with a first step”.

The author thanks Guido Daleman for important information and for obtaining the minutes of the Presidium meeting in Hatzenport, which were lost in Brussels due to water damage.