You are here:Home » Highlight post » The Long Fight for the Right of Association of Soldiers in Europe 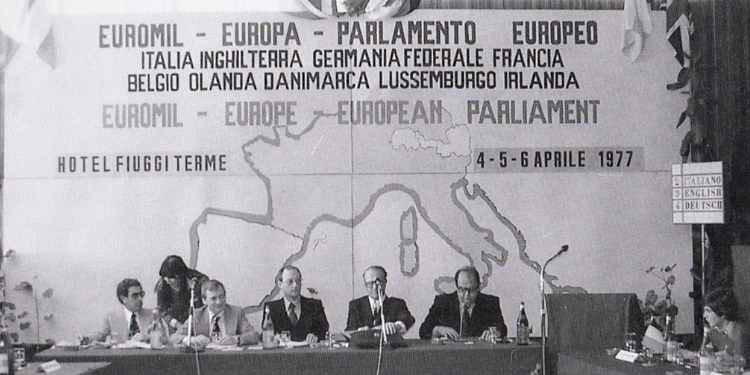 These articles are part of EUROMIL’s fiftieth anniversary commemorations. The original article was written by Michael Rudloff in German.

Since it was founded, EUROMIL has campaigned within the European institutions for the rights of European citizens in uniform.

With the founding of the umbrella organisation EUROMIL, the participating soldiers’ associations pursued the central goal of enabling soldiers in all European democracies to make their voices heard through their own professional associations. The actors saw themselves in accordance with the Universal Declaration of Human Rights proclaimed by the General Assembly of the United Nations on 10 December 1948, which expressly included the right of every human being “to form and join professional associations to protect their interests”. The “European Convention for the Protection of Human Rights and Fundamental Freedoms”, which was signed in 1950 and came into force in the member states of the Council of Europe in 1953, also contains a similar phrase. However, this fundamental right was subject to the provision that members of the armed forces, the police and the state administration may be restricted from exercising this right in the interest of national or public security. In practice, it meant that individual states banned the formation of professional soldiers’ organisations. In Great Britain and some southern European countries, political leaders saw the so called “Bündewesen im Heere” or alliances in the army as a “secondary government” that could influence, or even thwart, the command of military superiors: fear of discipline loosening and the weakening of the armed forces reigned supreme.

EUROMIL defended itself against this prejudice with the passing of a Resolution in Amersfoot, the Netherlands, in 1980, on freedom of association and the right to organise. The member associations referred to the positive experiences with military professional associations in Belgium, the Federal Republic of Germany, Denmark and the Netherlands. In no case did exercising the right to form a coalition affect the operational readiness of the armed forces. In fact, it was on the contrary as “all soldiers want to experience the democracy they are protecting.”

For EUROMIL’s President Jørn Kristensen , the restrictions on soldiers’ rights practiced in some countries to organise themselves in trade unions or professional associations meant that soldiers of all ranks felt like “second-class citizens”. The restrictions created an atmosphere of alienation from democratic values and society, which are the very values the armed forces were expected to defend in an emergency. The armed forces would become unattractive, especially for the well-trained specialists they needed. In the event of social tensions within the armed forces, there is no authority that can intervene as a mediator, nor is there an “early warning system” that can inform the leadership about problems and make suitable suggestions for making the military profession more attractive.

Soldiers from these countries were becoming less and less willing to put up with it. In order to enforce their rights, EUROMIL relied on the participation rights of the intergovernmental organisations in Europe.

The oldest is the Council of Europe based in Strasbourg. With the exception of the Russian Federation and Belarus, all European states currently belong to it (the Vatican State has observer status). It was founded in 1949 to protect human rights, pluralistic democracy, and the rule of law. One of the two statutory organs of the Council of Europe is the Parliamentary Assembly. It is made up of MPs nominated by the national parliaments from among their own ranks. Here, EUROMIL succeeded in finding important advocates in the struggle for recognition of the soldiers’ right to form associations. After the Committee of Ministers and the Parliamentary Assembly did not express any concerns, on 28 March 1979 EUROMIL was included in the list of non-official organisations with consultative status at the Council of Europe. This gave the umbrella organisation of the European soldiers’ associations the opportunity to participate in the decision-making process of the Council of Europe.

However, the attempt to get the Parliamentary Assembly to discuss soldiers’ association rights proved difficult. In 1980, the then EUROMIL President, Jens Rotbøll, succeeded in persuading the Danish delegation to support this initiative. The conditions initially seemed favourable. A year earlier, the assembly had granted the right to “law enforcement officers, MPs, armed forces and militia performing policing duties” to form and engage in professional organisations. The proposal was discussed in various bodies of the Council of Europe for two years with varying success, until the President of the Parliamentary Assembly, José María de Areilza , finally rejected a debate on this question in the Council of Europe. It can be assumed that, as a Spaniard, he opposed freedom of association for soldiers. The Danish delegation then used the only remaining chance. The leader of the small Liberal group, Björn Elmquist , brought an agenda item to the plenary session. He could count on the support of many MPs from countries where the right of association was already part of everyday life in the armed forces. A refusal from the British delegation was to be expected. With the smallest conceivable majority of one vote, the Parliamentary Assembly decided on 29 September 1982 to instruct the Legal Affairs Committee to deal with this question.

At its fortieth ordinary session, on 30 June 1988, the Parliamentary Assembly of the Council of Europe appealed “to all member states of the Council of Europe to give long-serving soldiers of all ranks, if they have not already done so, the possibility, under normal circumstances, to establish special interest groups, to join them and to to play an active role in it so that they can represent their professional concerns within the framework of the other democratic institutions.” The conscripts were left out of this text. What was meant by “normal conditions” was left to the interpretation of the respective government. This appeal was not legally binding anyway.

The Parliamentary Assembly of the Council of Europe should not be confused with the European Parliament, the cornerstone of which was laid in 1952. EUROMIL campaigned resolutely for an expansion of the political powers of the European Parliament with regard to the European Union to be formed and for direct elections of the members of parliament, which were carried out simultaneously in all member states for the first time in 1979. Through this commitment, EUROMIL gained allies among the MEPs of all parliamentary groups. The security policy spokesman for the EPP (Christian Democrats) group in the European Parliament, Brigadier General Wolfgang Schall, emphasized the importance of EUROMIL and the soldiers’ right of association in all democracies for the motivation of the soldiers and warned: “A political leadership that believes today that it could discredit or even neglect the military instrument will always be shipwrecked if political developments tomorrow force them to suddenly fall back on this instrument.”

Four years before the Parliamentary Assembly of the Council of Europe, on 12 April 1984, the European Parliament had passed a resolution “on the right of association for members of the armed forces” with a large majority. It largely corresponded to the EUROMIL proposal formulated by Guido Daleman on behalf of the Executive Committee and went beyond the later text of the Council of Europe in two essential formulations. It grants all peacetime soldiers the right to form professional associations to protect their social interests.

In order to implement this resolution in the national legislation of the states of the European Union, tough resistance had to be overcome in decades of struggle. In its resolution on the “European Defense Union” in November 2016, the European Parliament called on the member states to grant their soldiers freedom of association and to make it easier for professional associations to engage in a structured dialogue with the responsible authorities. In doing so, it adopted one of EUROMIL’s basic requirements.

EUROMIL’s involvement finally had an effect in Spain and Portugal. Since 2019, the Italian parliament has also been discussing a law that is intended to guarantee soldiers union rights following a ruling by the constitutional court.

For a long time, France resisted granting its soldiers the right to organise. Partial success was achieved in 2014. The Council of Europe’s European Court of Human Rights heard the complaint of two French military personnel who were banned from membership of what were considered to be union-like associations. While the Court still recognised the possibility of even wide-ranging limitations on the rights of these professionals, it stated that this should not mean depriving military personnel and their unions of the general right to organise in defense of their professional and moral rights . As a result, French soldiers are allowed to form military associations, but not unions. As “ service providers ”, these associations can provide their members with legal advice, but cannot influence parliament and government. Even fifty years after it was founded, EUROMIL has not yet reached its goal everywhere.