You are here:Home » Euromil News » The Future Is In Your Hands!

The Future Is In Your Hands! 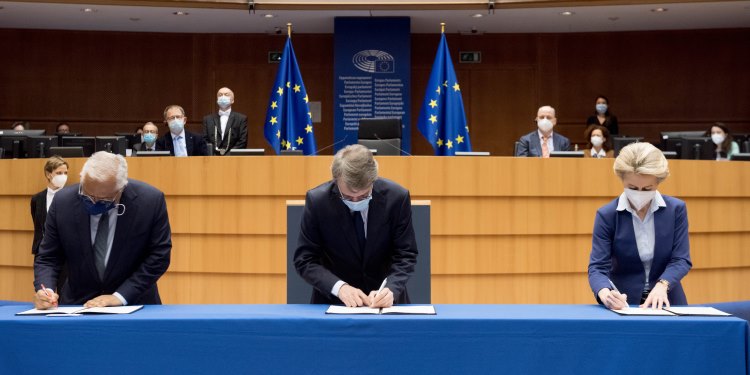 Participation of Ursula von der Leyen, President of the European Commission, at the signature of the Joint Declaration on the Conference on the Future of Europe

Europe Day, held annually on 9 May in commemoration of the Schuman Declaration, gives European citizens an opportunity to reflect on what solidarity has built over the past decades and what we hope to achieve together in the future. Above all, it gives EU citizens the chance to feel even more that they are part of something bigger; something to be “Stronger TOGETHER” – a slogan frequently reiterated by the European institutions.

Europe Day 2021 will be quite a unique event. Not only because we will experience that day virtually for the second consecutive year, but mainly because we are witnessing an initiative in which our voices can be heard as individual citizens. After long discussions between the various partners, on 10 March 2021, the European Parliament, the Prime Minister of Portugal on behalf of the Council Presidency, and the European Commission, issued the joint statement on the Conference on the Future of Europe (CoFoE). This declaration laid the foundation for a series of debates and discussions in which citizens like you and me, from all over Europe, can share their ideas about what Europe’s future should look like. Commission President von der Leyen emphasized: “Today we are inviting all Europeans to speak up. To say what Europe they want to live in, to shape it and join forces to help us build it. Citizens’ expectations are clear: they want to have their say on the future of Europe, on matters which affect their lives. Our promise today is equally clear: we will listen. And then, we will act.”

In advance of Europe Day on 9 May and the official launch of the Conference, a multilingual digital platform launched on 19 April. Thanks to this digital platform, EU citizens can express their opinion on any topic they consider important for the future of Europe. For the first time, all European citizens at every level, can express their ideas or respond to the ideas of others. They can also organize events themselves or participate in other initiatives. This platform should function as the focal point of the CoFoE and will be a digital space, belonging to me and you, to share our thoughts on the future of Europe: On our future!

EUROMIL calls on all European soldiers, as “European Citizens in Uniform,” to seize this opportunity and make use of this platform. As long as participants treat each other’s ideas and suggestions respectfully, no subject is considered taboo. Under the motto “The future is in your hands: make your voice heard”, every single one of us can exercise our fundamental right to be heard.

EUROMIL will certainly not remain on the side-lines! Will you?

One Year On: Assessing the Leadership of the Slovakian Ministry of Defence

A Note of Thanks from Italy