You are here:Home » Members news » Speech of HKKF President Vinther at EPSU Congress 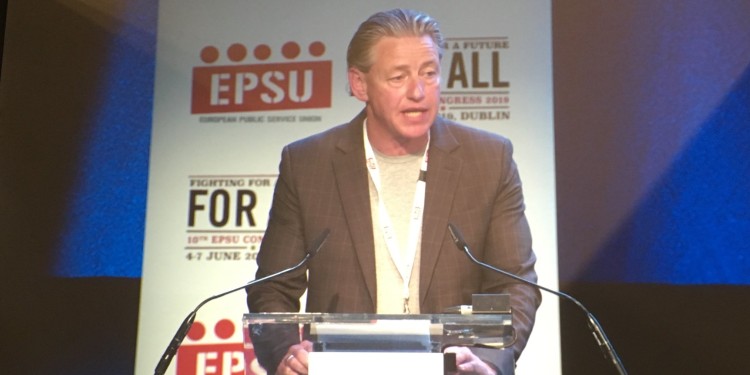 The HKKF President and EUROMIL Board Member Flemming Vinther delivered a speech at the EPSU Congress in Dublin this year. The full text of the speech is available hereunder.

I am pleased to note that the basic right to organise enjoys a prominent position here at our 10th EPSU congress.

Not only because the right to organise forms the foundation for our common effort in every other policy area, but also because far too many colleagues still do not enjoy this right.

I know that everyone here is active in the fight for widening the right to organise.

But we have a group of colleagues who are often overlooked in this context because many instinctively think that their job is so specialised that it does not align with being organised and being an integral part of the union system.

And this group is professional soldiers.

Unfortunately, soldiers often have to hear from politicians and military leaders that the soldier’s job is so special that it would not be possible to perform it if the soldier were to enjoy the same rights as other employees. That a military in which soldiers enjoy the right to organise will be a military which will lose its ability to fulfil its duties and, ultimately, the ability to function as a fighting force.

Danish soldiers of all ranks are organised in their own unions which again are a part of the established union system in Denmark, and these very soldiers participate in international operations in some of the most dangerous places in the world in a way which engenders respect and recognition from our allies throughout NATO.

So, there is no contradiction between being organised and performing the role of the professional soldier.

On the contrary, it is a complete paradox that soldiers who are deployed all over the world to secure basic democratic rights for others do not enjoy these rights in their own country.

There are still too many places where it is either specifically illegal for soldiers to organise or where it is formally legal but is being resisted in real life via retaliation against those active in unions, ranging from prison sentences to being passed over for promotions.

It is also, unfortunately, evident in a more general form when, for example, we read the Commission Directive regarding transparent and predictable working conditions, in which the armed forces can be exempt in total.

But exempting the armed forces, or for that matter other public sector employees, must always be based on a specific, concrete situation rather than a general exemption.

As soldiers we accept, of course, that in certain situations we are working under conditions which contravene most regulations and principles related to working hours and the working environment.

It makes no sense, however, that our daily work should not be covered by the same rights and regulations which are in place for other employees. Because that is what we are – employees and citizens in uniform.

In consequence, dear EPSU colleagues – reach out to your armed forces colleagues in your own countries. Help them to achieve real rights to organise and help them become a part of our union community.

Even though we are soldiers and even though ours are rather special jobs, we are also employees and we are colleagues – and we need your support to ensure that the soldiers who are deployed to secure peace and basic rights for all can enjoy those very same rights in their own countries.

Thank you for listening.