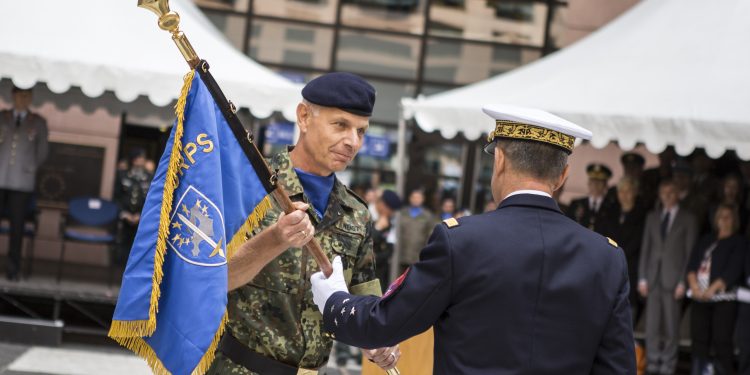 In the past years, a huge emphasis has been put on the security and defence in Europe. New asymmetric threats such as terrorism, cyber-attacks, organised crime, human trafficking, and disinformation campaigns made security one of the biggest preoccupations of EU citizens. Nevertheless, when thinking of the EU defence sector, its social dimension is probably the last element one might consider important. For that reason, EUROMIL would like to focus on that matter in a series of interviews with experts who are aware of the issue and might explain what the biggest obstacles are, present the undertaken actions and suggest solutions to improve the current situation.

How would you define the social dimension of the European defence? What would be part of this notion?

In my capacity as the Commanding General Eurocorps I cannot speak about the social dimension of the European Defense as such, only about those aspects that directly concern my unit, Eurocorps.  We distinguish two different aspects:  On the one hand we are characterized by national –and therefore very diverging– directives and regulations.  These cover questions ranging from salaries and overtime hours to leave policies and discipline.  Every nation regulates these questions autonomously, oftentimes in quite different ways.  On the other hand, many facets of everyday business have been standardized simply because administering a military staff wouldn’t be possible otherwise.  This concerns for instance daily working hours and standardized requirements for training, language skills and procedures.  It is like two sides of the same coin.  At the same time, what unites us all is that we are stationed in a place where we have not been before, together with our families, on behalf and in the service of our nations.

In your opinion, what is the biggest issue the military faces nowadays in the social context?

There is not much difference compared to years past.  The necessity for soldiers to be confident, to have “faith” in the people with whom they work, both nationally and internationally and regardless of the country these people come from.  Soldiers like to be where life is good and where leadership is strong.

For me as a military leader, the single most important challenge is managing diverging working hours and leave policies.  This makes coming up with a consistent training plan in peace time highly demanding.  But when it comes to real deployments abroad or potential defense scenarios, these aspects naturally take a back seat.

Deepening of the cooperation and capacity-building are high on the European defence agenda but there is no project that would touch on the social issue and potential removal of differences that can be noticed among armed forces that collaborate with each other. It is especially visible in the CSDP missions: there are different standards for each nation in terms of training, social security and help provided in case of any unfortunate event, not mentioning the financial differences. Do you think that these issues should be regulated at the European level? Should working conditions for soldiers in the CSDP missions be synchronized?

The principles defining social standards can only be dealt with at the national level.  I do not really see any imperious need for action in this field within a realistic and functioning multinationality.  In this area, armed forces are actually a mirror of the society around us.

In the past years, Eurocorps was certified as a NATO HRF, a NATO Response Force and a EUBG HQ. These certifications were obtained after numerous training periods and validation field exercises. One can conclude that common training is well organized. However, even as members of a multinational HQ, Eurocorps staff members work under national regulations in the social and economic field. Would a harmonization of these regulations for military personnel working in a multinational environment be an advantage? Are there specific fields for which you see the need to implement this?

This question is not easy to answer; soldiers’ initial situations can sometimes greatly vary, but they will always be in line with their national retirement schemes and social security systems.  Eurocorps is stationed in France.  We have soldiers from no fewer than ten nations serving at our headquarters.  While for the French personnel, service at Eurocorps is service in the homeland, soldiers from other countries and their families are subject to significant hardships.  This starts with different health insurance systems and goes all the way to the issue of travelling home to see their relatives.  One positive aspect I can see is that despite all the national divergences, some important basics, such as medical care, are ensured for everyone based on international treaties, or that children go to schools by and large recognized in their home countries, and so on. Though a number of European harmonization processes have been implemented over the past few years, some national divergences persist.

PESCO is considered the most important instrument to foster common security and defence in an area where more coherence, continuity, coordination and collaboration is needed. Nevertheless, the list of ambitious and more binding common commitments does not contain any reference to social and human rights of military personnel. Do you think such a commitment should be introduced and if yes, how can this be done? Is PESCO an adequate platform or should another initiative be proposed to cover these issues?

There’s a multitude of international treaties in force, and these of course apply to us soldiers, too, as do human rights and a vast number of laws and prescriptions enacted to protect employees.  We, the military, are not excluded from all of this.  In the event of military conflicts, there is the Geneva Convention, the Hague Conventions and the like.  They are all subject to continuous development and adaptation to match today’s conditions. PESCO is mainly about the harmonization and continued development of military capabilities.  I do welcome this, because the threat has changed, and after years of peace, such an adaptation has become necessary.  The intention is to bundle these efforts at the European level, but responsibility for individual projects remains with the volunteering nations.  Given the focus, I do not hold it to be sensible to amend this treaty by adding a chapter on social aspects.

If a European initiative chiefly focused on social aspects were to be implemented, I believe the impetus should come from the nations.  They are the ones who can decide on what should be harmonized because harmonization inherently implies a scaling back of national purview.  It is a decision for political representatives, not myself.

It can be observed that European armed forces face problems related to lack of experts (especially in the field of cyber, AI, etc.). Do you see a solution to attract potential candidates to choose the public sector over the private one, besides financial benefits?

There is indeed a whole set of capabilities where I can identify shortfalls.  IT and cyber-defence are amongst them. The civil sector, with whom we are competing for the brightest minds, is also affected.  There are various approaches, some of which go well beyond mere questions of remuneration.  One option, implemented by various nations, places emphasis on training.  Training courses are being developed hand-in-hand with the private sector and offered up to interested candidates.  These are also being offered long-term development and continued training perspectives, not to mention safe jobs.  For many candidates, this matters a great deal more than the amount on the paycheck at the end of the month.  For the military and industries within the scope of such schemes, staff are being trained in a purposeful, needs-based fashion.  This saves time that would otherwise be wasted on unnecessary training content inconsistent with actual requirements.  In Germany, we work that way, but countries like France also propose comparable training schemes.

In the context of technological progress, do you think that new technologies will eventually replace the human element, thereby changing totally the structure and composition of the military?

For me, the answer to this question is and will always remain the same: The human being is at the heart of it all!

As stated in the Programme of the Austrian Presidency, the Council will also continue to work on the existing initiatives on equal treatment and non-discrimination, and the initiative for work-life balance. As a military commander, do you consider the latter to be fully introducible in the military context?

Armed forces, be they national or multinational, will always be subject to the necessity to justify their action before Parliament.  Everything must be done, both internally and towards the outside world, to make sure that soldiers find answers as they endeavour to seek solutions, justification, meaning and significance in their action.  Individual initiatives are certainly helpful in this field, but what counts in the end is the culture of military leadership that provides the framework for any of a soldier’s actions.

In reference to the previous question, it can be observed that the so-called “Millennials” who are entering the labor market value work-life balance much more than previous generations, while at the same time being less interested in traditional hierarchies and bureaucracies. How can it influence the future of the military profession?

Again, for me it always boils down to military leadership, both in national and multinational units.  Because tasks and missions are never accomplished by an individual, but always within a community and necessarily with an impact on that community.  Seen this way, military leadership must be a part of the DNA, it must be tangible, it must be the example to follow.

This is what soldiers of all nations and ranks may expect from us.  And the framework conditions of military service must be in line with this.