You are here:Home » Euromil News » Roundtable on Military Trade-Unionism and Advancing Social Dialogue in Belgrade

Roundtable on Military Trade-Unionism and Advancing Social Dialogue in Belgrade 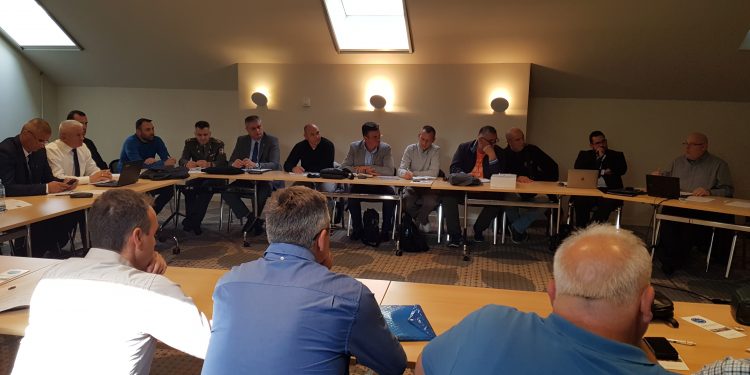 On 1 October 2018, EUROMIL had the pleasure to meet with representatives of Serbian military trade unions at an informal roundtable discussion focusing on the military trade-unionism and advancing the social dialogue. The meeting aimed at bringing together the relevant Serbian stakeholders to discuss the current situation in Serbia and explore possibilities for cooperation. Besides the local trade unions, the meeting was attended by the representatives of the Serbian Ministry of Defence, the Ombudsman Office and military trade unions from FYROM, Hungary and Montenegro.

It was emphasized that, at least in theory, Serbian military personnel are equipped with all essential legal tools required for executing their rights, and that their position, especially in comparison to colleagues from neighbouring countries, is advantageous. Nevertheless, Serbian armed forces face some serious issues related even to the basic rights of their personnel.

During the first part of the discussion, EUROMIL’s observer — the Regional Branch of Administrative, Juridical, Defence and Police Union “Nezavisnost” (GS UPOiP “Nezavisnost”) — enlisted the main problems faced by the military and stressed that although a general improvement of the social dialogue could be observed in the past period, the collaboration between trade unions is still lacking. The Military Trade Union of Serbia (Vojni sindikat Srbije – VSS) elaborated on the current situation of military personnel and focused on the most alarming issues and grave violations of their rights, starting from the very basic ones such as no allowance for warm meals up to cases of mobbing and lack of life insurance. The Military Trade Union of Serbia pointed out the reluctance of the authorities to act in accordance with the law what in consequence leads to the obstruction of trade union’s functioning and disclosure from the negotiations (e.g. related to the collective agreement). Taking into consideration EUROMIL’s role and position, VSS stated that it would be potentially interested in joining EUROMIL.

The second session was opened by Mr Marcell Hajdók, the President of the Ethics Committee from the EUROMIL’s Hungarian member — Defence Forces Trade Union (HOSZ). Mr Hajdók presented the current situation of trade unions in Hungary and started the discussion on their effectiveness in terms of safeguarding human rights of the military personnel. Further, the representatives of the Macedonian Independent Trade Union of Defence (NSO) and Trade Union of Defence and Army of Montenegro (SOVCG) focused on the current situation of the military personnel in their homelands and put emphasis on the issues that they still face and that are analogical to those that can be identified in case of Serbian armed forces.

The meeting was an excellent opportunity to share experiences, strengthen the ties and establish collaboration not only at a national but regional level, too. EUROMIL hopes that this fruitful discussion will become a basis for further improvements in benefit of the military personnel in Serbia and looks forward to future discussions.