You are here:Home » Euromil News » Once Again a New Initiative! 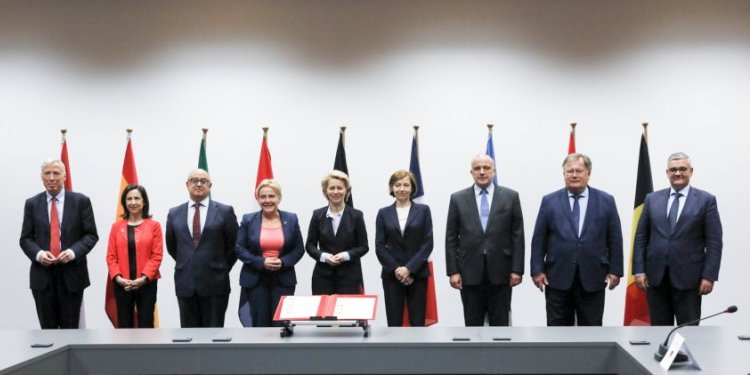 On 25 June 2018 defence ministers from nine European countries signed a letter of intent on creating the European Intervention Initiative (EII). Belgium, Denmark, Estonia, France, Germany, the Netherlands, Portugal, Spain and the UK – at this moment all EU member states – declared their willingness to set up a joint European military intervention force.

The EII was part of the plan for European Defence as expressed by the French President Emmanuel Macron in his meanwhile famous Sorbonne speech of September 2017. The proposal must be seen in the context of the French opinion on the Permanent Structured Cooperation (PESCO), which they often find to be too inclusive and thus not ambitious enough. That the agreement on the EII has now been concluded quite quickly, can be found in the fact that national governments understand that more collaboration is needed to face the common threats. Additionally, it is no secret that the UK is still looking to play a role in the European common security and defence in the post-Brexit period, even if today they are not supporters of European security and defence.

It is important to underline that the EII is not a EU instrument but a seperate agreement between European countries. However, the group of countries that signed the letter of intent in Luxemburg, will work “as close as possible with the European defence union because we know that our troops are engaged either in NATO or the EU, but also in UN missions or counter-terrorism coalitions”, as declared by the German Defence Minister Ursula von der Leyen at the signature ceremony on 25 June 2018.

The initiative has also to be seen separately from PESCO, which is a treaty-based framework and process to deepen defence cooperation amongst the EU member states who are capable and willing to do so. The aim is to jointly develop defence capabilities and make them available for EU military operations. It is also important that PESCO has been signed by a broad majority of EU member states, except Denmark, Malta and the UK.

The motivation to sign the EII agreement was clearly expressed by the French Defence Minister Florence Parly in a tweet after the signature ceremony in Luxembourg: “The goal is that our armed forces get to know each other and act together. Thanks to exchanges between the staffs and joint exercises, we will create a European strategic culture. We will be ready to anticipate crises and respond quickly and usefully.” [free translation from the French original]

Let me be clear! As a strongly convinced supporter and promoter of the Common Security and Defence Policy and deep-going defence collaboration between our European armed forces, I – and EUROMIL – applaud initiatives that bring us closer together and make sure that the European Union and its member states play a key role in this field. I believe that there is no doubt in anyone’s mind that European countries are still in need of more collaboration and cooperation. We should, however, accept that at this point not everybody is ready to go for the same final goal(s), whatever they may be.

However, looking at all the initiatives that have already been taken or are under discussion, I want to make two remarks.

Firstly, more than ever, it is needed that we start talking the same language. During the whole debate, a mix of names and acronyms (European Army, the European Defence Union, an army of Europeans, PESCO, the EII) have been used, which in the end leaves people confused on the ideas and final goals. The European Parliament, as well as the European Council, should once and for all make clear what our common goal is. Is it the European Defence Union, as decided by the European Parliament in its resolution of November 2016, or is it a European Security and Defence Union, or perhaps the European Army that European Commission’s President Jean-Claude Juncker was talking about, or even the army of Europeans, as declared by Ursula von der Leyen at the opening of the Munich Security Conference in February 2018? Let’s make it clear and start talking about the same “thing”!

Secondly, once again in the case of the EII – just like in PESCO – there is no word on the most essential factor for success: military personnel! Already in his Sorbonne speech, President Macron said that the intervention force “will be tasked with quickly deploying troops in crisis scenarios near Europe’s borders”. The main goal is making sure that troops can be brought together and deployed on short term. It would, at least in my opinion, be an opportunity to decide that in case of deployment under the EII participating troops would fall under the same conditions, working and social ones included. Let’s hope that we will never face such a problem in the framework of the deployment of the EII, but would it be acceptable that those soldiers that act under the same initiative are treated differently? Is the life of a soldier of country X worth less than the life of a soldier of country Z?

How long will it take until our political leaders understand that our men and women deserve to be equally treated?