You are here:Home » Members news » News from our German Association, DBwV 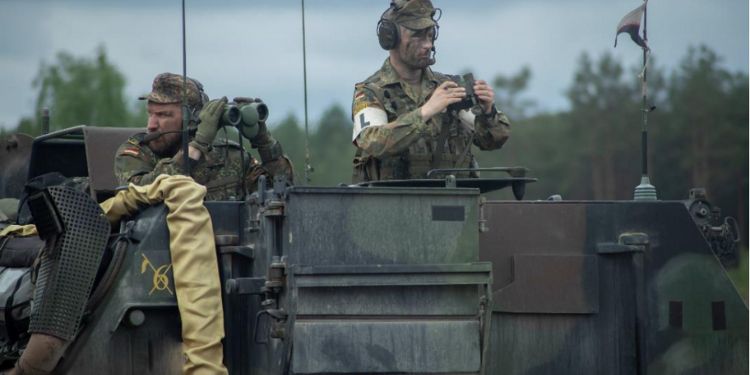 Since August 2017, Bundeswehr soldiers have been deployed as part of the multinational NATO Battlegroup in Lithuania. The primary operation is of the German soldiers within the framework of the eFP assistance initiative is Lithuania. Depending on the situation and the decision of the respective partner nations, a deployment of the unit to the other Baltic states or to Poland is nevertheless possible. Since January 2017, the unit has been stationed in the small town of Rukla in the centre of Lithuania and uses the military training area in Pabrade, east of the country close to the Russian border. The unit consists of 1,000 to 1,200 NATO soldiers, including about 600 German soldiers, and is under German command. The deployed forces rotate every six months. 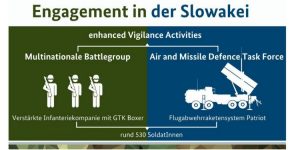 Since March 2022, 300 soldiers of the German Air Force have been stationed in Slovakia with the Patriot Phased Array Tracking Radar to Intercept on Target as part of NATO’s alliance defence. The mission is to secure Slovakian airspace together with the allies. As lead nation, the Bundeswehr assumes responsibility for the German-Dutch air defence missile unit at the Sliač site. In addition, the multinational Battlegroup Slovakia was established, whose framework nation is the Czech Republic. The battlegroup is stationed in Lešť, in central Slovakia. Since 18 June 2022, the Bundeswehr has been represented by the first soldiers of the German pre-command to the Battlegroup, with another 200 or so following on 24 June. On the same day, the unit, which in addition to the German soldiers also includes forces from the Czech Republic, Slovakia, Slovenia and the USA, was officially commissioned. With the arrival of the vehicles, material as well as its own logistics component, the build-up of the German forces was completed at the end of June 2022. 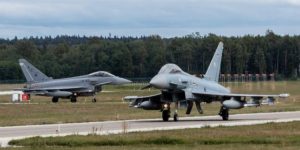 Since 1 August 2022, five EUROFIGHTERs of the German Air Force have been deployed to the Estonian airbase Ämari for Baltic Air Policing Reinforcement. With them, Germany will again protect NATO airspace over the Baltic States from August 2022 to April 2023 together with our NATO partners. A total of around 150 servicemen and servicewomen from numerous areas of the Bundeswehr are participating in this mission-like commitment. 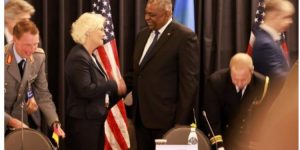 German Minister of Defence Christine Lambrecht and her US American counterpart Lloyd Austin on a meeting of the Ukraine contact group on US Air Baise Ramstein in September 2022; Credits: Lambrecht_Austin_Ramstein: Photo: Federal Ministry of Defence.

The Special Fund for the Armed Forces, approved by the Bundestag on 3 June 2022 in the amount of 100 billion euros, will be realised by authorising additional borrowing outside the limits of the debt brake, whereby the time frame for spending is open. However, if one takes Chancellor Scholz’s statement that from now on the NATO target of 2 percent of GDP for defence is to be exceeded and compares this with the budget planning of the Federal Ministry of Finance, which does not envisage any increase in the current defence spending of 50 billion euros, a difference remains. For 2022, no expenditure from the special fund is planned, for 2023 it is 8.5 billion, so that there will then be a gap of slightly less than 18 billion euros. From 2023 to 2026, the last budget prepared by the current government, the 2 per cent target could be reached. Of the estimated 100 billion euros, 40.9 billion euros are to be invested from 2023 onwards in upcoming armament projects within the air dimension,19.3 billion in the sea dimension, 16.6 billion in the land dimension, 20.7 billion in the necessary digitisation of the Bundeswehr, 2 billion are to be made available for the clothing and personal equipment of the soldiers, and 500 million for research and development projects.

6. Status quo: Budget planning of the German Ministry of Defence 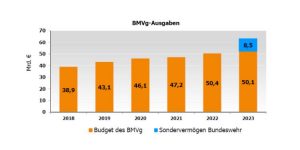 Budget planning of the Ministry of Defence 2018-2023; Credits: Federal Ministry of Finance

The Federal Ministry of Defence is to have €50.1 billion at its disposal for the 2023 budget year under Section 14, in addition to expenditure of €8.5 billion already budgeted for. The 1st reading of the federal budget of 445.2 billion for the year 2023 is scheduled for 6 to 9 September 2022 in the Bundestag. From 21 September to 10 November, the Budget Committee of the Bundestag will discuss the cabinet decision of the Federal Government from July 2022. From 22 November to 25 November 2022, there will be a 2nd and 3rd lecture in the Bundestag and finally, on 16 December 2022, a 2nd lecture of the German Bundestag. 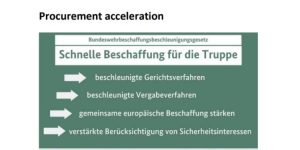 The Bundeswehr Procurement Acceleration Act, passed in the German Parliament on 7 July, will enable the completion of award procedures for military equipment more quickly and efficiently in future. Due to current geopolitical situation, it is highly demanded is to ensure that military material is delivered to the soldiers of the Bundeswehr in a shorter time in future. In the past, the Federal Office of Bundeswehr Equipment, Information Technology and In-Service Support (BAAINBw), which is responsible for material procurement, has been criticised. Experts have long criticised the lengthy procurement and testing processes, as well as the practicality of the procured material.

8. Editorial coverage of EUROMIL history in the DBwV member magazine 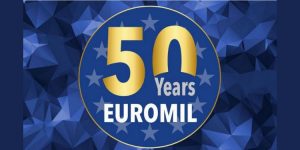 Since March 2022, a monthly column in the DBwV member magazine “Die Bundeswehr” has reported on milestones in EUROMIL’s first 50 years. The articles are published in German and English on the pages of the German Armed Forces Association and EUROMIL. A bilingual commemorative publication with information on the history and self-image will be published on the occasion of the anniversary on 13 September 2022.

The articles (in German) are available here. 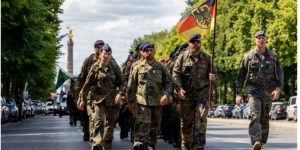 The marchers took the Straße des 17. Juni to the Reichstag building, where the bereaved families were waiting. Photo: DBwV/Yann Bombeke

119 soldiers and reservists have been marching since 25 July in silent remembrance of deceased  comrades: 116 kilometres of marching distance (116 participants stand for 116 soldiers killed and  deceased in action abroad) plus 3,348 metres (3 participants commemorate the 3,348 who were killed in action). Each participant wears the name of a soldier who died demonstratively on their chest during the entire march. “This march is a living culture of remembrance,” says Lieutenant Colonel (G.S.) Marcel Bohnert. The Deputy Chairman of the German Armed Forces Association accompanied the last 25 kilometres of the march today from the former Berlin Gatow airfield to the Brandenburg Gate and is currently taking part in the memorial service at the Bundeswehr Memorial at the Ministry of Defence in Berlin. “The event is very close to the hearts of all marchers.”

10. Wreath-laying ceremony in memory of the heroes of 20 July 1944 – “Important memorial in the heart of Berlin” 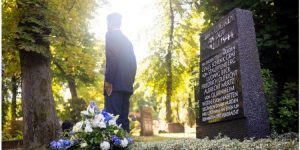 Colonel Claus Schenk Graf von Stauffenberg and four of his co-conspirators are commemorated with the grave of honour in the cemetery of the Old St Matthew’s Churchyard in Berlin. The DBwV wants to contribute to making this place of remembrance better known. Photo: DBwV/Yann Bombeke.

Keeping the memory of history alive and remembering the courageous assassination of Adolf Hitler on  20 July 1944 – that is an important concern of the German Armed Forces Association (DBwV) and also of the Soldiers and Veterans Foundation (SVS). Away from the many official commemorations of today’s anniversary, Lieutenant Colonel (G.S.) Marcel Bohnert invited a small circle of participants to lay a wreath at the grave of honour of the State of Berlin in the cemetery of the Old St. Matthew’s Church in the Schöneberg district in the morning in honour of Colonel Claus Schenk Graf von Stauffenberg and four of his co-conspirators. The Deputy Chairman of the DBwV laid a wreath on behalf of the DBwV and SVS.

CS: "Ready from the get-go"