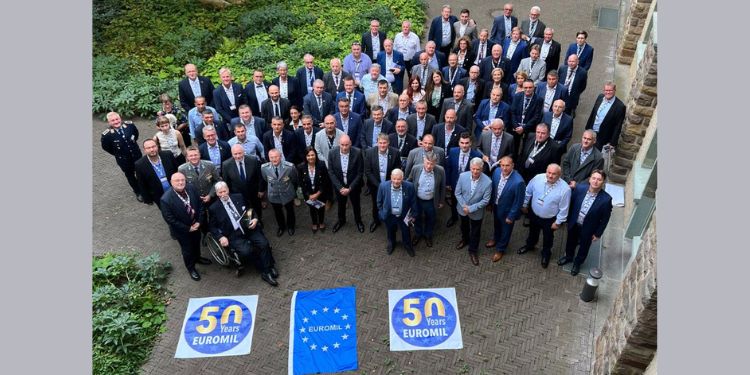 On 13 September 1972, EUROMIL was founded in Bergisch Gladbach, Germany, by professional military associations from Belgium, Denmark,  Italy, the Netherlands and the Federal Republic of Germany. 50 years later, current and former members of EUROMIL gathered in Bergisch Gladbach to celebrate the 50 years anniversary. Almost 100 people participated at the ceremony, despite that travelling to Bergisch Gladbach is not evident.

The Vice-President of EUROMIL, Mr Jörg Greiffendorf, opened the ceremony by underlining that EUROMIL acts and should continue to act in unity, being one team as the founding members were.

Furthermore, Lieutenant General Martin Schelleis, representing the German Armed Forces, stated that European governments should not exclude military personnel – they are citizens just in uniform – since they represent an important pillar of the European unification process. As the German Chancellor, Olaf Scholtz, has indicated, Europe is facing today a Zeitenwende! Besides, the former President of the European Commission Jean-Claude Juncker has also acknowledged that in Europe there are two nations, those that are small and those that have not yet realized that are small. The answer is the European Integration, and hence, we need strong representation of the men and women serving in the Armed Forces. EUROMIL, in this regard, is a key player.

Colonel Andre Wüstner, Chairman of our German member association, the DBwV, highlighted that EUROMIL is facing as well a Zeitenwende, especially concerning the developments in EU’s Common Security and Defence Policy (CSDP). Congruent with Colonel Andre Wüstner “Military associations have a voice in Brussels, let us stand together, express different approaches, let us advocate the social dimension in our home countries and in Europe. Let us shape the Zeitenwende and lead it to success as EUROMIL has done already again in the past”.

The next speaker at our celebration ceremony was Mr Jens Rotbøll – President of EUROMIL from 1984 to 2002, who shared his experiences and memories from the founding days of EUROMIL and the great men that realized the ambition of creating a European umbrella organization of professional military associations.

Mr Bernhard Gertz, Vice-President EUROMIL 1994 for 18 years, and acting President in 2005-2006, received from the current EUROMIL President, Mr Emmanuel Jacob, an honorary membership for his devotion and strong actions during his time in EUROMIL. Mr Bernhard Gertz also stated that EUROMIL during the course of 50 years achieved many of its goals, but work is still needed. Today, it is important to work towards a common military culture in Europe that would advance the Common European Security and Defence Policy. It is important for the EU to have common exercises of its soldiers, who would first be European ones and then national soldiers. These goals are difficult to be achieved and we have a long way to go, but today Europe needs a common military progress to protect its interests.

Lastly, the President of EUROMIL, Mr Emmanuel Jacob, stressed that the fight is not over, we must defend the citizens in uniform on a coordinated way on the European level. Today, the implementation of the EU’s Strategic Compass presents new challenges and opportunities that we must cease to advocate for the men and women, the uniformed workers, that protect our countries.

Overall, the speakers expressed their gratitude for EUROMIL’s hard work during the past 50 years, while they stressed that politicians should hear the people that defend our freedom. The work of EUROMIL is far from over, the challenges remain the same from 1972, and we will continue to fight!

The 50 years Brochure is available here.