You are here:Home » Members news » News From Germany 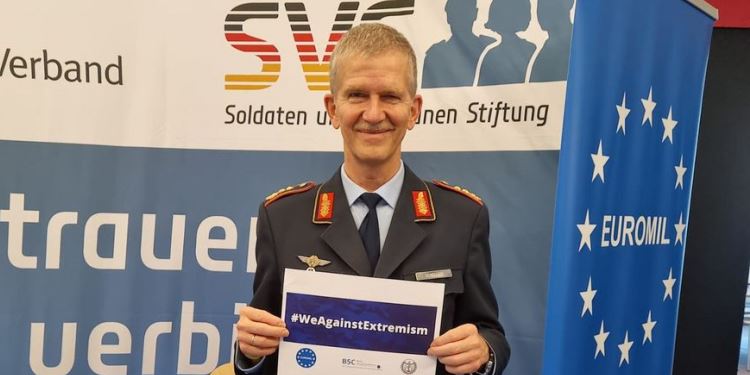 The German Armed Forces Association successfully participated in the 20th Berlin Security Conference from 24 to 25 November 2021. Alongside the Munich Security Conference, this industry event is one of the most important forums for the exchange of information on current security and defence policy issues. Many high-ranking national and foreign representatives from politics, the military and business exchanged views at the various panel discussions. DBwV and EUROMIL used the conference to promote once again its #WeAgainstExtremism campaign.

For additional information on the current BSC, DBwV published an article on its website here. You can also check out the latest DBwV-Podcast episode (German) towards the European engagement of the DBwV here.

According to current legal framework conditions in Berlin the DBwV concerning the actual pandemic dynamic COVID-19 crisis the DBwV is still looking forward for a face-to-face convention of its General Assembly in Berlin from 13 to 17 December 2021. Deputy Federal Chairman Sergeant Major (ret.) Jürgen Görlich states the importance of this event like this: “Our 21st General Assembly is both the climax and the conclusion of our third term of office, a moment of truth and a determination of the future. It is the high mass of grassroots democracy, an expression of lived comradeship and collegiality. Here we set the course for the coming, very demanding years – and then we set out, as we have done for the past 65 years, to fight for the people of the Bundeswehr and to reliably keep our promise: We are shaping our tomorrow!”

For additional information concerning the 21st General Assembly you may click here.

The fact that the German Armed Forces Association is following the current Conference on the Future of Europe is necessary and important, it is another opportunity for the European Commission to get in touch with the concerns of its citizens in order to actively shape future policy. For the area of security and defence policy, the DBwV has written an online article to generate more attention for DBwV demands at the European level, such as the introduction of a European ombudsman institution, to name but one.

For additional information, you can access the following online article on DBwV homepage here.

Administrative assistance of the German Army – Fight against COVID-19

The German Armed Forces have initiated further adjustments of the “Operation Contingent Assistance Corona” in order to be able to help quickly and flexibly in the current volatile situation of the “4th wave” in the coming weeks. By 7 December, the contingent will be increased from the current 8,000 forces by another 4,000 soldiers to 12,000 forces. One third of this contingent (4,000 forces) has a response time of 48 to 72 hours. For 8,000 forces, graduated response times of 7 to 14 days apply. Currently, the Bundeswehr is supporting 14 federal states with 5,900 soldiers within the framework of administrative assistance. Currently, 2,400 forces are deployed in 200 health offices, 700 forces in 57 hospitals and 840 forces in 73 vaccination centres. The focus is on Bavaria (1,700), Saxony (480) and North Rhine-Westphalia (570). Another 90 requests for administrative assistance with 900 forces for health offices (360) and vaccination centres (170) are in preparation; the trend continues to rise. By 7 December, up to 12,000 soldiers will be available for administrative assistance. Depending on the situation, further adjustments are possible in December. The reinforcement of the contingent is oriented towards the regional focal points, i.e. the new forces will be made available with a focus on the south and south-east. (Regional Command South: Bavaria, Baden-Württemberg, Rhineland-Palatinate, Saarland, Saxony, Thuringia). An availability of 48 – 72 hours applies to the rapidly available forces (around 4,000 soldiers) of the contingent.

For further DBwV information on COVID-19 issues, you also can click here.

News towards a General Vaccination Requirement in the German Army

All soldiers in the Bundeswehr will have to be vaccinated against the coronavirus in future. After Minister of Defence Annegret Kramp-Karrenbauer issued a directive to this effect on November 24, immunisation against Covid-19 was included in the so-called basic vaccination scheme of the troops.
The basis for the obligation is paragraph 17a of the Soldiers’ Act:
(1) The soldier must do everything in his power to maintain or restore his health. He must not impair his health intentionally or through gross negligence.
(2) The soldier must only tolerate medical measures against his will if they are:
1. serve to prevent or combat communicable diseases, or
2. serve to determine his fitness for service or deployment.

The fundamental right to physical integrity (Article 2, paragraph 2, sentence 1 of the Basic Law) is restricted in this respect.

Coalition parties (SPD, Greens, Liberals) came across that the Bundeswehr should be enabled to tackle tomorrow’s challenges and tasks of alliance and national defence as well as missions at the same time. To this end, the new government aims to provide the Bundeswehr with the best possible personnel, material and financial resources and ensures that structures are made more effective and efficient in favour of greater operational readiness. This is to be preceded by a critical stocktaking of personnel, material and finances.

For the DBwV, as the body representing the interests of the people of the Bundeswehr, the focus is always on personnel. The negotiating partners want to ensure that the Bundeswehr is demographically balanced in the long term, always with a view to its age structure. They expressly want to further increase the attractiveness of service in the Bundeswehr. It stays clear that the intention is to facilitate the transition of retiring soldiers to the military administration or to the economy.

The German new government can be quoted by its coalition treaty to modernise procurement, accelerate the modernisation of infrastructure and prioritise marketable systems in replacement procurements in order to avoid capability gaps. The coalition partners want to further expand the care and welfare of soldiers and their families. Attention will also be paid to strengthening internal leadership and expanding civic education. Another big talking has been integrated into the new official document: It was announced to invest 3 percent of the national GDP into diplomacy, development aide and defence policy to fulfil its NATO contribution of 2 percent goal of national GDP investment (page 144).

Furthermore the long ongoing debate concerning the procurement of armed drones is off the table. All three parties agreed to approve the arming of Bundeswehr drones. This is to be made possible under “binding and transparent conditions and taking into account ethical and security policy aspects”. “Armed drones can contribute to the protection of soldiers on foreign missions,” it says. In the last legislative period, the SPD had repeatedly postponed the decision on arming Bundeswehr drones.

The new German government finally wants to abandon Germany’s fundamental rejection of the United Nations Treaty on the Prohibition of Nuclear Weapons and thus deviate from the previous NATO line. Germany is to participate in the Conference of the Parties as an observer. So far, no other NATO member has such observer status. “In the light of the results of the NPT Review Conference and in close consultation with our allies, we will constructively accompany the intention of the Treaty as an observer (not as a member) at the Conference of the Parties to the Treaty on the Prohibition of Nuclear Weapons,” the coalition agreement states.

For further information, you will find the document of the coalition treaty here and for further analysis by DBwV, you can also click here.

For more information on any of the above please contact DBwV.