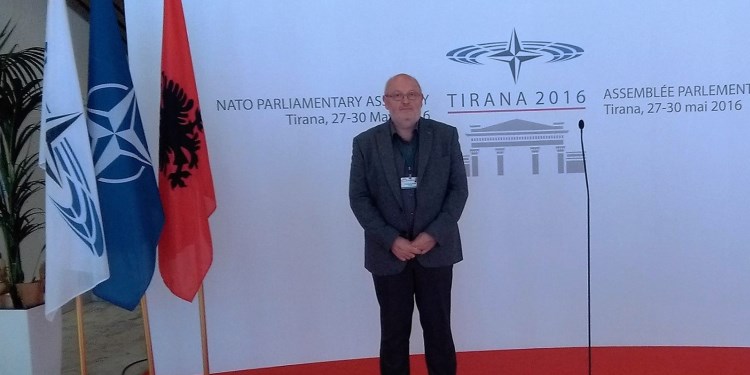 The NATO PA brought together more than 300 parliamentarians from the 28 NATO member countries as well as delegates from partner countries and observers to discuss reports, recommendations and declarations. EUROMIL was one of the few observers and the only organisation representing military personnel.

It was the first NATO PA session ever held in Tirana, which is since 1920 the capital of Albania. “For many reasons, and not only depending on the Albanians, Tirana has long been a point on the map where West and East tried to define each other’s boundaries” the Albanian delegation leader Mr. Pandeli Majko said. For him it almost seemed like a dream that the NATO PA convened in Tirana, “the capital of the most isolated former communist country in Eastern Europe”, he continued.

This spring session took place a month before the Allied Heads of State and Government will meet in Warsaw to take stock of how NATO is adapting to a new, and particularly challenging, security environment. “They will need to build upon the sound foundations laid down in Wales two years ago. Our leaders must send a clear and strong message of unity and resolve through the decisions and actions endorsed in Warsaw”, the Chairman of the NATO PA Hon. Michael R. Turner said. In his welcoming message he stressed the will to defend each other and stand together, even if the alliance is facing many challenges: Russia and Ukraine, the terrorist threats and instability and conflicts in Europe’s neighborhood and beyond. By adding that the Warsaw Summit should also send a sign of encouragement to those countries seeking to join the Alliance, he mentioned most of the topics that would be the topic of speeches, presentations and discussions at the committee and plenary meetings during the next two days.

As usual, parliamentarians at the spring session did not vote on reports, but presented and discussed draft documents in order to finalise them for the autumn meeting.

The Political Committee under the chairmanship of Ojars Erik Kalnins (Latvia) welcomed the Minister of Foreign Affairs of Albania, H.E. Ditmir Bushati, and the former President of the Republic, Prof. Dr. Rexhep Meidani. Both of them addressed the audience giving a brief overview of the situation in the Balkan area and the challenges that lay ahead.

In preparation of the annual meeting in Istanbul, Turkey, in November 2016 three draft reports have been presented and discussed. A first report analysed the implementation of the Wales agreements and upcoming Warsaw Summit. This report will be influenced by and updated after the Warsaw Summit before it can be voted on in Istanbul. The second report reflected the NATO partnership with China. The third draft report tackled the security in the Gulf.

The Albanian Defence Minister Mimi Kodheli addressed the audience speaking on national and transnational security challenges in the current security environment. The least that can be said is that her speech was frank, direct and open. After her, Major General Jeronim Bazo, Chief of General Staff of the Albanian Armed Forces, gave a presentation on the priorities, commitments and contributions of the Albanian Armed Forces.

Four interesting draft reports have been discussed during the Defence and Security Committee under the chairmanship of the French Member of Parliament Nicole Ameline. The first report addressed the implementation of the Wales agreements, focusing on military issues (while the Political Committee report addressed the political consequences of the summit agreements). The other draft reports addressed the future role of the naval power, the international military campaign against Daesh and the Resolute Support Mission in Afghanistan.

During the closing plenary session the Prime Ministers of Albania and Montenegro took the floor. The Albanian Prime Minister addressed the UK delegation, asking them to “please not leave the European Union”. Since the future NATO-membership of Montenegro has been mentioned on several occasions during the session, the views of the Montenegrin Prime Minister were highly appreciated.

Last but not least the floor has been given to NATO Deputy Secretary General Alexander Vershbow, who is a regular guest at the NATO Parliamentary Assembly. In his speech he looked back on the achievements after the Wales Summit as well as ahead to the Warsaw agenda. On NATO’s relation with Russia Vershbow said that “we will not go back to normal relations with Russia without full implementation of Minsk agreements“. Asked about the defence spending of the allies, he pointed out that “more shaming and naming in the Alliance can help”. Vershbow is of the opinion that those who are “weak on the input” are often also “weak on the output”. The European Parliament representative asked the Deputy Secretary General about the current status and future of NATO – EU cooperation. He stated to have high expectations on strong statements and commitments referring to the upcoming European Council as well as NATO Summit. Emphasizing that the EU and NATO have different competences in certain fields he stated that joining forces to cover the full spectrum can only strengthen European and global security.

Before closing the spring session, the NATO PA adopted a declaration on ‘A United and Resolute Agenda for NATO at the Warsaw Summit’ co-presented by the chairpersons of both the Political and the Security and Defence Committee. The Assembly showed itself convinced that it is the first responsibility of governments and parliaments to provide security for the people. The declaration is the consensus among the elected parliamentarians of NATO’s 28 member states on how to ensure that the Alliance continues to serve as the cornerstone of nations’ security. “The Warsaw Summit” stipulates the declaration “must make clear that the Alliance is one and indivisible, prepared and able to address the entire range of challenges to our security at 360 degrees.”

More information on the NATO PA and in particular the Spring Session in Tirana can be found online.