You are here:Home » Euromil News » Federal Assembly of the European Movement International 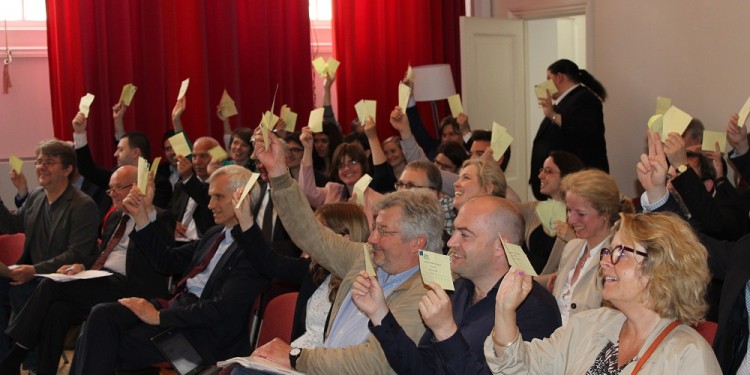 On 27 May 2016, the European Movement International (EMI) held its Federal Assembly in The Hague. The meeting brought together over 60 delegates from national councils as well as international member associations, amongst which EUROMIL, to discuss joint policy positions and vote on administrative procedures.

During the morning session, the delegates debated a wide range of topics which are currently high on the agenda in Europe. Issues such as the UK Referendum, migration and free movement as well as EU enlargement were debated and policy papers adopted. The Assembly furthermore unanimously adopted a policy position on security to the drafting of which EUROMIL actively contributed. The document highlights the need for a comprehensive foreign and security policy including a common European defence policy. In this context, the paper suggests different items which the European Global Strategy – to be presented by the High Representative on Foreign and Security Policy Federica Mogherini this summer – should contain. It furthermore explores the possibilities of giving more power to the European Union, instead of only relying on cooperation amongst member states to deal effectively with the manifold challenges the Union faces at the moment.

The afternoon session was dedicated to administrative voting but also left time for reports from the national councils and international member associations. The session was closed by Bert Koenders, Dutch Minister of Foreign Affairs, who encouraged the participant to not lose sight of the basic values of the European Union, even in difficult times where the movement against Europe seems to have bigger momentum that the movement for Europe: “I am confident that, with the strong foundations we have, we can overcome the challenges facing us now. We must not forget what we have already achieved. We must not doubt that we can take effective action. The fundamentals of the European Union are strong. (…) I count on you.”