You are here:Home » Euromil News » OSCE Conference on the Code of Conduct 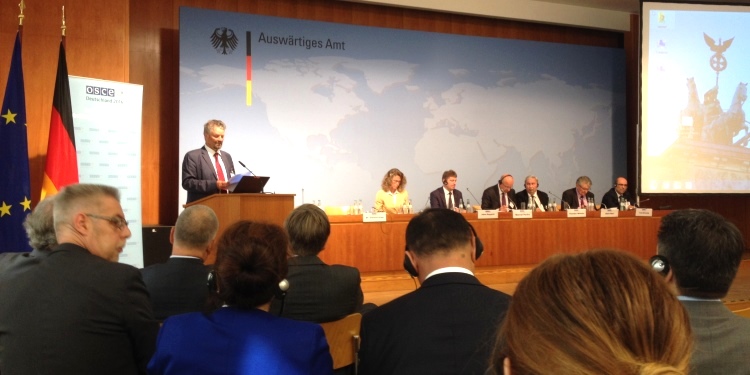 On 2 and 3 June 2016, the German Chairmanship of the OSCE organised a conference on the “Code of Conduct: Parliamentary Control and Oversight of the Security Sector” in Berlin. The conference brought together over 100 representatives of more than 30 states and institutions. Parliamentarians, OSCE officials and ombuds-institutions were represented, as well as EUROMIL, which was the only organisation representing military personnel.

In his opening remarks, Mr. Gernot Erler, Special Representative of the Federal Government for Germany’s OSCE Chairmanship, pointed out that the Code of Conduct (CoC) is a modern and innovative document, laying out the basic principles for the democratic control of the armed forces.

Mr. Dvorak, FSC Coordinator for the Code of Conduct on Politico-Military Aspects of Security, introduced the CoC and presented the context in which it was drafted. The code consists of inter- and intra-state elements as well as suggestions for the implementation. As such, it is rather a norm setting than an operational document for security sector governance. Participating states agreed to submit regular implementation reports to the OSCE, a measure which contributes to the confidence-building nature of the CoC.

During the first session, panelists focused on the current status of parliamentary control of armed and security forces and the role of the CoC. Mr. Bartels, Parliamentary Commissioner, explained his role as Parliamentary Commissioner for the armed forces in Germany and explained the situation in his country, where the armed forces are a “military within the democracy” and soldiers are regarded as “Citizens in uniform”. Other panelists mentioned the changed situation in a number of European states where the military is increasingly deployed internally, in order to perform security tasks related to the growing terrorism threat. Panelists agreed that this internal deployment demands for strict parliamentary oversight in order to safeguard the fundamental rights and freedoms of the citizens.

Future challenges and the question whether the current CoC – drafted more than 20 years ago – gives answers to newly arising problems were debated during the second session. New challenges arising from terrorism were already touched upon during the first session. New technologies such as drones, the privatisation of security tasks as well as hybrid warfare were added. Panelists and participants agreed that the CoC gives enough flexibility to deal with current and future challenges. However, there needs to be political will to interpret the document accordingly. Representatives of DCAF – co-organising the conference – pointed on different tools they developed to supports states in the legislative process, for example in the area of regulating private military and security companies.

Session three brought together representatives from Tunisia and Kyrgyzstan. Both countries are in the process of developing new rules and regulations for their police forces and benefitted greatly from the support of the OSCE and especially the translation of the CoC into different languages. Participants and panelists agreed that a deep understanding of the CoC can only be achieved through training and education for all parties involved: security forces, parliamentarians and the public.

The conference made it clear that parliamentary oversight of the security sector is today as important as it was 20 years ago when the code was drafted. Flexible interpretation of the CoC can deliver democratic answers to newly arising challenges. Outreach activities to promote the code outside the OSCE area have proven to be not only very important but are equally delivering immediate results.