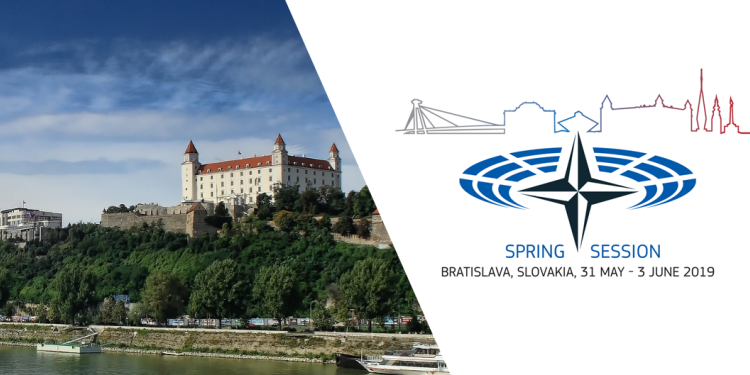 The 2019 spring session of the NATO Parliamentary Assembly (NATO PA) took place in the ancient halls of Bratislava Castle (Slovakia) from 31 May to 3 June 2019.

“We come together at the convergence of three significant anniversaries” Madeleine Moon, NATO PA President, said. “NATO’s 70th anniversary and the 15th anniversary of Slovakia’s membership in NATO. It is also 15 years since Slovakia hosted its first NATO PA session, just two months after its official accession to NATO.” Ms. Moon added.

The agenda for this NATO PA 2019 spring session, included a broad range of issues which are of central importance for the Alliance and its nations. Issues such as the relations with Russia, the impact of the rise of China, the future of arms control, artificial intelligence as well as cyber security and defence were discussed by more than 300 parliamentarians from the 28 NATO member countries from North America and Europe, as well as delegates from partner countries and. EUROMIL was one of the few observers and monitored two of the NATO PA’s Committees.

The Defence and Security Committee (DSC) was held on Saturday 1 June 2019. The NATO PA spring session does not vote on reports but is organised with a view on preparing reports for the autumn session through an agenda full of presentations on interesting issues and draft documents.

As first speaker, the Chair of the DSC, the US Congressman Michael R. Turner, introduced the Slovak Minister of Defence, Mr Peter Gajdoš. Mr. Gajdoš is Minister of Defence since 2016 after a military career which he ended as 1st Deputy Chief of the General Staff of the armed forces of the Slovak Republic. In his speech Minister Gajdoš paid a lot of attention to the issue of the modernization of the Slovak armed forces and the increase of salaries of military personnel by an average of 30 %. Interesting was that he linked this to the discussion of recruitment and retention which is also a topic of discussion among the EUROMIL member associations. The minister also emphasized that when Slovakia abolished conscription, it failed to look for a trained reserve. “Voluntary service is no real alternative. We cover a part of the gap by active reserve, but we need budgets to train them and this is a political decision.” the Minister concluded.

During the next hours the DSC rapporteurs presented three draft reports on “Nuclear deterrence”, “Security in the North Atlantic” and “Evolution and lessons learned of NATO exercises”. These reports will be further discussed and amended to be submitted for the final discussion and approval at the autumn meeting.

Finally, three presentations – on “Modern Deterrence”, “The Demise of the INF” and “Afghanistan 2019” – opened large debates amongst the PA’s participants.

The Political Committee (PC) under chairmanship of Lord Campbell of Pittenween (UK) gathered on Sunday 2 June 2019.

Replacing the Minister of Foreign Affairs, Miroslav Lajcak, who was excused, Frantisek Ruxicka, State Secretary of the Ministry of Foreign and European Affairs of the Slovak Republic addressed the PC: “We are stronger when we stand together…Freedom & democracy are the corner stones”. In his speech, the State Secretary also addresses the modernization of the Slovak armed forces and their preparation for the broad range of threats. “We have to find a way how to defend democracy and our democratic institutions” Frantisek Ruzicka said. “How do we counter aggression and maintain the strength of the NATO Alliance’s strategic communication? We need to make our unity a strategy!” he added.

A first draft report was presented by the rapporteur Gerald E. Connolly (US) on “NATO at 70”. As NATO celebrates its 70th anniversary in 2019, it is worthwhile to celebrate its achievements and consider its future trajectory.  The latter is of importance as the Alliance is facing the most complex security environment in its history, defined by both external and internal challenges. According to the draft, the purpose of the report is twofold: first, to stress that NATO’s success is not only due to its military capabilities, but also to the fact that it is an alliance underpinned by common values. This emphasis on shared values has been pivotal in maintaining Alliance cohesion for seven decades, and it will be decisive for continued success. The fact that the rapporteur is from the US, might be the reason why the draft report is quite limited on the NATO-EU collaboration. It only stipulates that “Partnerships also help to avoid overburdening NATO.  For example, the Joint Declaration signed between NATO Secretary General Jens Stoltenberg and the EU’s High Commissioner Federica Mogherini at the 2018 Brussels Summit outlines areas of cooperation on hybrid threats, cybersecurity, and defence industry research. Developing this relationship going forward will help NATO take advantage of work being done by the EU on areas of common interests.”

Additionally, the rapporteur proposed to establish a Democratic Resiliency Coordination Centre (DRCC) with the explicit purpose of helping allied nations to strengthen democratic institutions. The DRCC would serve as an oversight body for common values and help provide assistance to allied nations on election integrity and security, judicial independence, press freedoms, and other issues important to maintaining a vibrant democracy. This recommendation created quite some reactions, but let us hope that if a DRCC would be created, it would look for a partnership with established stakeholders, such as, amongst others OSCE-ODIHR.

Furthermore, rapporteur Raynell Andreychuk (Canada) presented two draft reports, one on “Stability in Africa” and a second on “NATO-Russia Relations”. These were the last presentations that Ms. Andreychuk presented before leaving the NATO PA after 19 years of service .

The PC furthermore had two presentations on the agenda, namely on “The changing character of contemporary conflict” by The Hague Centre for Strategic Studies (HCSS) and another one by Brigadier General Walter Feichtinger of the Austrian Defence Academy on “Ukraine under pressure”.

The plenary session on Monday 3 June was opened by NATO PA President Moon. In her speech she focused mainly on the 70th anniversary of NATO. Education and communication on NATO and its values is key, Mrs. Moon emphasized. She has used her first six months as President of the NATO PA not just to advocate for NATO, but to be an educator for the Alliance. She has sought feedback and options to continue to ensure NATO is both valued and understood.

Several Slovak high-level speakers, such as the Slovak President Andrej Kiska, took the floor to highlight the developments in Slovakia and their role in NATO. President Kiska pointed out that members of parliament should take their responsibility. “It’s not on Governments to decide, but it’s up to you members of parliaments to decide on the budget we have available for our security and our defence” he said. The Deputy Speaker of the National Council on his turn, said that Slovakia will reach the 2 % norm two years earlier than foreseen in 2022 instead of 2024.

Finally, Ambassador Alejandro Alvargonzalez, NATO Assistant Secretary General for Political Affairs and Security Policy, took the floor. During the Q&A the issue of European defence came on the table. “European defence is supported by all NATO members. We asked the EU to invest more in their defence and now they do. But what means a European army? Does it mean one army? Does it mean battlegroups (they exist)? It needs to be clear!”, the Ambassador replied. On the Turkish investment in a Russian weapon system his diplomatic answer was that “we need interoperability and therefore we have concerns with the S-400 purchase by Turkey. While this is a national decision and NATO has limited options, we are concerned and we ask for all nations to adhere to interoperability”. Nice closing message for the allied nations!

More information on this NATO PA session can be found here.