You are here:Home » Euromil News » Military Erasmus: An Enabler for further Defence Cooperation 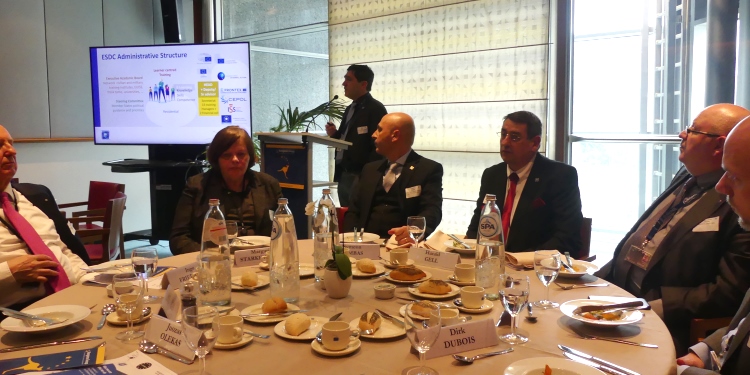 On 18 February 2020, the European Organisation of Military Associations and Trade Unions (EUROMIL), together with Kangaroo Group, co-hosted a lunch debate on “Military Erasmus: an Enabler for further Defence Cooperation” at the European Parliament in Brussels.

While enhancing the interoperability of the armed forces of EU Member States is recognised as a necessity, too little attention is devoted to staff needs in this respect. However, programmes such as the European initiative for the exchange of young officers, commonly known as “EMILYO” or “Military Erasmus” are essential to create a common European strategic culture and identity that would ultimately allow military personnel to work more and better together.

The aim of the event was therefore to raise awareness about the “Military Erasmus” initiative and the benefits of exchanges for training and education in the defence sector. The debate also addressed the question how EU Institutions and Member States may better support education and training exchanges among members of the armed forces.

The speakers presented the work of the ESDC, more particularly its “Military Erasmus” initiative, and introduced its latest projects, such as the CSDP Doctoral School, the Sectoral Qualifications Framework Military Officers (SQF-MILOF) and the EU Military Secondary Schools Forum. They highlighted the advantages of mobility for students and teachers brought by the “Military Erasmus” and discussed the necessary means to broaden its reach.

During the discussion, it was agreed that mobility improves interoperability, harmonization and the development of a common security and defence culture amongst armed forces from EU Member States. Mobility enables people to exchange knowledge, network and generate a European feeling. This means that in addition to strengthening the skills and resilience of armed forces personnel, mobility enhances the efficiency of the armed forces by creating friendship and trust among staff who will ultimately have to operate together on the ground.

To conclude, EUROMIL believes that the “Military Erasmus” initiative contributes to strengthening defence cooperation among EU Member States and facilitating the completing of the Defence Union. EUROMIL thus calls on national authorities to further support this necessary initiative by dedicating the necessary resources and political support to the ESDC.

However, EUROMIL wishes to highlight that exchanges for training and education should go beyond this initiative and include military personnel of all ages and from all ranks, meaning not only officers from military academies. It therefore invited MEPs to pay further attention to staff education and training needs in their future legislative work on defence matters, including exchange programmes such as military Erasmus, as they did in the resolution of 13 June 2018 on cyber defence (2018/2004(INI)).

For further information on the “Military Erasmus”, please visit the website of the European initiative for the exchange of young officers: http://www.emilyo.eu/

An article about the event was also published by Miguel Lopez in InfoLibre, in Spanish. It is available here.