You are here:Home » Highlight post » Looking Back on the Recent Past! 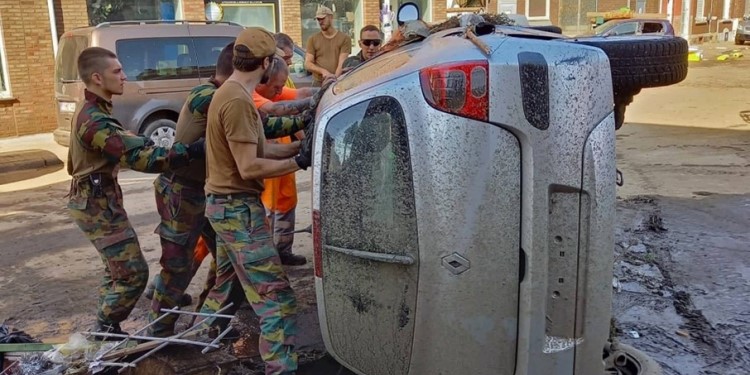 Looking back on 2021, it cannot be denied that the pandemic, just like it did in 2020, took a lot out of all of us. COVID-19 has demanded a lot from society in general, but over the past period the pandemic has, in addition to the numerous health workers in the broadest sense of the word, also requested a lot of commitment from the military community. It soon became clear all over Europe that the existing structures were no match for this rapidly changing virus.

In many areas, the armed forces and its personnel have stepped in to support or even completely take over various tasks of a logistic and medical nature, among other things. I know I’m repeating myself, but situations such as the Italian columns of military trucks loaded with coffins of COVID-19 victims, for example, is an image I’ll never get out of my brain. And yes, let us emphasise once again that deployment of this nature also requires accompanying measures. Not only of a financial nature, but also the much-needed support of colleagues who have to process this mentally. Contrary to what policy makers sometimes think, soldiers are not numbers or robots, but people of flesh and blood with the will and commitment to assist society. But also with the request and the need to receive a minimal form of respect and recognition in return.

And then, in the early summer days, the unforeseen or at least the unexpected happened so quickly. After months of discussions and preparations for the withdrawal of our troops from Afghanistan, the Taliban took back control of the country in an unprecedentedly rapid period of days or weeks. In any case, the result was that while the return scenario was in progress and for the majority of our countries already fully implemented, we suddenly found ourselves in a serious crisis situation in which both our own and Afghan citizens had to be expelled from Afghanistan. It’s too easy to dismiss this with a simple “that’s what we always predicted!” Was it insufficient political will? The wrong military assessment? Or failing intelligence? Whatever, but the facts are there and lessons will and must be learned from them.

Just as it was thought that there was a bright spot at the end of the tunnel, unseen natural phenomena suddenly appeared that endangered the population all over Europe. Fire and water came over our territory and the deployment of the armed forces and its personnel was once again necessary in various places. In some situations, soldiers are still literally and figuratively clearing rubble and assisting the local population during this difficult period in which their possessions were lost.

But maybe that’s why the majority of us once made the choice to join the military? The choice to be deployed where and when it is necessary to assist, protect and defend our fellow citizens. And with that, the keyword of the existence as EUROMIL has fallen: citizens in uniform! Just as our predecessors and founders envisioned this in September 1972, almost 50 years ago, our struggle remains to ensure that the military community is a full part of society and not a fringe phenomenon or a mere appendage. History has proven what can happen if military personnel are not accepted as citizens of that society!

That is why it is so important that EUROMIL continues to pursue the goal that has already been set several times in the past of being part of the larger European trade union structures. While we are also facing some obstacles in this respect, it must be clear that we are determined to get closer to the European trade union world. Let’s underline that EUROMIL is not looking for titles, positions, or special statuses. We are aiming to represent every single European soldier to have good working conditions, acceptable social and human rights, and for such measures to be obtained through collective bargaining by their representative associations and unions; as citizens, but above all as workers in uniform. Shouldn’t that be the goal of every trade union? Isn’t that what is wanted for every worker, as well as those in uniform?

No doubt that 2021 was a special year. A year loaded with challenges and surprises. How 2022 will develop is still unclear, but already before the start it is seen as the “year of defence”. Cross your fingers and let’s wait and see!