You are here:Home » Euromil News » Launch of the Compendium on Human Rights of Armed Forces Personnel 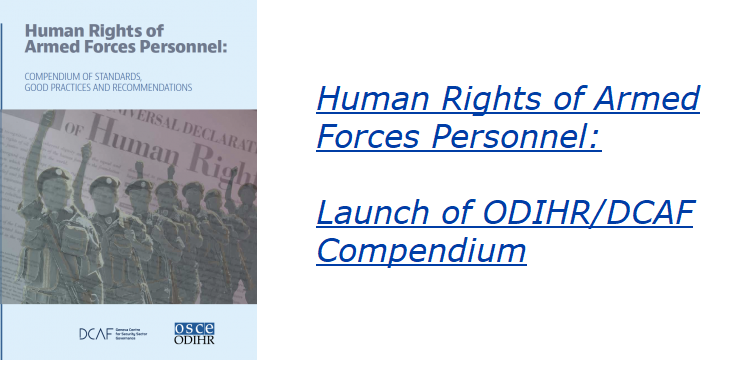 A recording of the event is now available to view here.

On 5 March 2021, the OSCE Office for Democratic Institutions and Human Rights (ODIHR) and the Geneva Centre for Security Sector Governance (DCAF) launched the Compendium of standards, good practices and recommendations on Human Rights of Armed Forces Personnel.

The Compendium presents an overview of legislation, OSCE commitments, policies, and mechanisms for ensuring the protection and enforcement of the human rights and fundamental freedoms of armed forces personnel, including many examples and good practices from across the OSCE region that have proven successful. This Compendium provides recommendations for respecting human rights of armed forces personnel on 18 distinct topics, ranging from civil rights, freedom of association, rights of racial minorities, prevention of torture and other forms of ill-treatment, human rights education, military justice, among many others.

The Compendium is an indispensable tool which focuses on the human aspect of security. It builds on the first ODIHR/DCAF Handbook on Human Rights and Fundamental Freedoms of Armed Forces Personnel published in 2008, and includes new issues induced by technological and societal changes in the last 15 years. It recalls that military personnel are “Citizens in Uniform” who should enjoy the rights they are called to defend for others. Armed forces personnel should be integrated in society and reflect the society they serve. Their rights should be respected.

Emmanuel Jacob, President of EUROMIL, who participated as a speaker in the launch event, emphasised that “the Compendium is an essential tool to recall that human rights and fundamental freedoms apply to armed forces personnel under international standards and legislation and remind OSCE Participating states of their commitments. It shows that any limitation to the rights of members of the armed forces, justified by the specific nature of the military profession, should be interpreted restrictively and surely not serve as justification for imposing blanket bans on rights of military personnel”. He added that “Members of the armed forces should be involved in the discussion about how their human rights can be safeguarded. Participating will not only improve their level of protection and progress towards democratic armed forces, but also their moral and loyalty which will ultimately contribute to operational effectiveness.”