You are here:Home » Euromil News » Internal Security and Defence Debated in Portugal 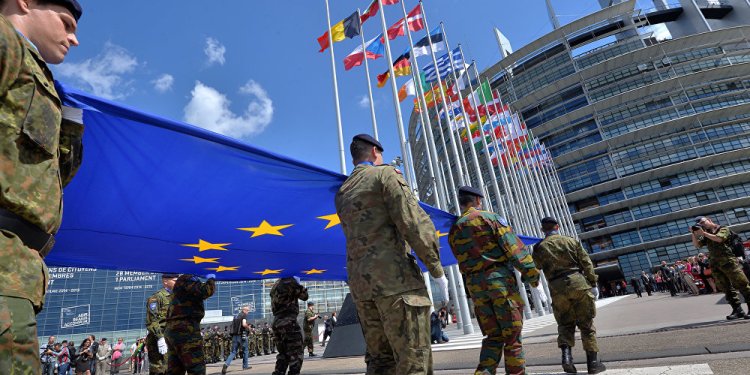 In the context of this years’ 60th anniversary of the Treaty of Rome, and just after Europe Day, the Portuguese Council of the European Movement organised a debate entitled “The EU in the field of internal security and defense” on 11 May 2017. The event was organised in collaboration with the New University of Lisbon – Faculty of Social and Human Sciences and the Military Academy. The aim was to discuss the EU’s security and defence policy, encompassing military planning and capabilities for ensuring internal security and economic stability.

Pedro Soares de Almeida, the Coordinator of the Political Studies of the FSHS opened the debate welcoming the speakers and the audience, where mostly civilian and military students were represented. The panel of speakers was composed of António José Tello, Professor at the Military Academy, Ana Santos Pinto, Professor of Social and Political Studies, José Conde Rodrigues, President of the Portuguese Council of the European Movement and Bernardo Ivo Cruz, from the University of Bristol (UK). The moderator was Leonor Metelo, Vice-President of the Portuguese Council of the European Movement.

The speakers approached different problems concerning the consequences of the so-called “crisis”, the cutbacks and the restrictions on the defence budgets all over Europe. Some comparisons were established between European and Middle Eastern/North African countries in terms of defence equipment investment, with a clear loss of weight for the European countries. The issue of eventual problems of interoperability of drones, satellites, etc. was discussed. Furthermore, it was said that the reinforcement of the common defence market (Defence Action Plan) may affect the EU governance system since the final competences would lie with the European Commission. Because of economic and financial restrictions, the question was raised whether it is possible to have a common defence without a true political union? Is Europe an economic or a political project? If it is an economic project, the role of the European Central Bank needs to be discussed as well. The risk seen by some participants was that the European success may lead to its own failure! The possible impacts of Brexit where discussed and the idea was shared, that the departure of the United Kingdom might allow an improvement of EU defence projects and systems.

The moderator presented the member of the Board of EUROMIL and the floor was given to Antonio Lima Coelho who mentioned that EUROMIL particularly advocates the human factor and the social dimension of security. He noted that while all speakers talked about material and equipment, the human factor was never mentioned. Antonio Lima Coelho explained EUROMIL and its objectives to the audience. He finished his intervention also referring to the fact that soldiers are serving under different flags in the same mission but do not enjoy the same rights – this needs to be changed!