You are here:Home » Euromil News » EUROMIL And OSCE-ODIHR On Visit In Balkan Region 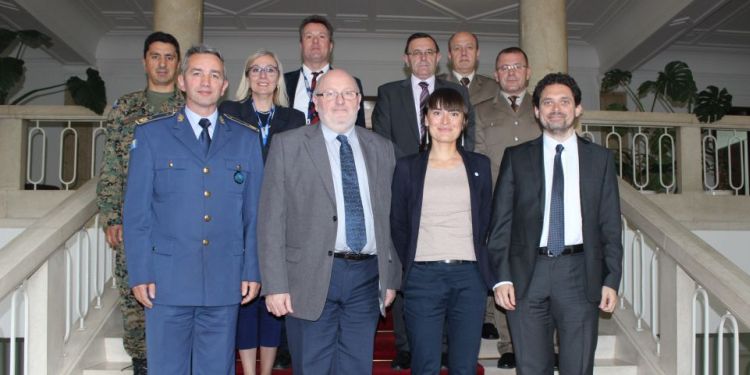 The OSCE Office for Democratic Institutions and Human Rights (ODIHR) and the European Organisation of Military Associations (EUROMIL) organised from 8 to 11 May 2017 a joint visit to the Balkan region.

The delegation composed of Omer Fisher, Head of the Human Rights Department of ODIHR, Ewa Sapiezynska, Human Rights Officer of ODIHR and Emmanuel Jacob, President of EUROMIL visited the capitals of Albania (Tirana), Bosnia-Herzegovina (Sarajevo) and Croatia (Zagreb). Their visit aimed at meeting parliamentarians, Defence Ministers, ombudsinstitutions and military leadership of these countries to discuss the possibility of easing restrictions to the rights of military personnel in their respective countries and provide them with information and guidance on how to do it.

OSCE participating States commit to ensure the enjoyment and protection of human rights and fundamental freedoms of armed forces personnel in the OSCE Code of Conduct on Politico-Military Aspects of Security (Budapest, 1994). This includes the right of service personnel to form or join associations, which rests at the core of functioning democratic systems. While this right is enshrined in all major international and regional human rights instruments and is guaranteed in the OSCE’s Copenhagen Document of 1990, restrictions are still upheld in a number of OSCE participating States impacting on the ability of military associations to protect rights in the armed forces.

Concerning the right of association, which was the main topic of the presentation of EUROMIL, it has been confirmed that in all three countries the legislation foresees a clear ban on the right to form or join trade unions in the armed forces. However, whereas it is clearly foreseen in Albania that soldiers can join professional associations, legislation is less clear on this issue in Bosnia-Herzegovina and Croatia. The presentations of OSCE-ODIHR focused on human rights and gender in the armed forces. The representatives of OSCE-ODIHR and EUROMIL offered their full support on this and other issues. One of the concrete proposals was to bring their experience to the region in support of the process of a possible implementation of the right of association linked to a social dialogue. It is EUROMILs experience that granting the right of association to military personnel without a clear framework for a social dialogue in a sphere of mutual respect and openness, is a lost opportunity.