You are here:Home » Members news » HKKF to the New Danish Minister for Defence: We are Ready to Cooperate to Achieve the Grand Visions 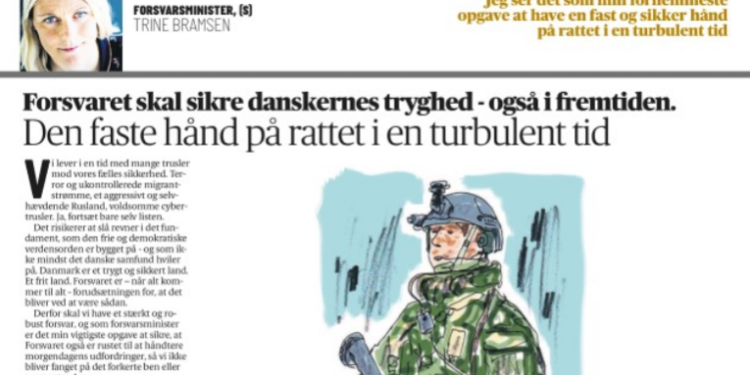 On 27 June 2019, Trine Bramsen took office as Denmark’s new Minister for Defence, and on 17 August 2019, she presented her visions for the Danish Defence in a feature article. In the article, she states that she wants to focus on the employees of the Danish Defence, implementation of the Defence Agreement 2018-2023, veterans and on ensuring broad mandates for international engagements. HKKF, the Danish Union of Enlisted Privates and Corporals in the Danish Army, looks forward to cooperating with the Minister.

“I think the Minister is spot on with several of the areas that need focus. Now the difficult task is to turn the visions into action. HKKF is ready to cooperate and provide specific proposals. We have already had the first meeting, and I look forward to our continued discussions”.

Those are the words of the president of HKKF, Flemming Vinther. He particularly notes that the Minister for Defence, Trine Bramsen, emphasises the implementation of the Defence Agreement in her feature article.

“Outside the Danish Defence and in the Danish Parliament, people tend to forget that it takes some years for the Defence Agreement to be implemented. The money and the new colleagues included in the agreement are not ready from day one. It takes some years, and many are therefore still under a lot of pressure in their everyday lives, although it has been almost two years since the agreement was concluded. It is important that the Minister is aware of that situation”.

About the employees, Trine Bramsen writes:

“The Danish Defence has a special responsibility for its employees. As an employee, it is important to feel appreciated and be allowed to develop. The Danish Defence must provide opportunities – also for those who one day take off the uniform to enter the civil labour market… At the same time, the Danish Defence must contribute broadly society – not least by addressing the lack of apprenticeship places”.

In reply to that, Flemming Vinther says:

“I am pleased that the Minister focuses on the employees and their development opportunities, also when their time in the Danish Defence ends. I look particularly forward to cooperating with the Minister to establish a vocational educational programme for enlisted privates”, he says and continues:

“When it comes to addressing the lack of apprenticeship places, I can only agree with the Minister. However, I would like to remind that today, the option of having military apprentices no longer exists. That scheme should be reintroduced so that colleagues, who are already good soldiers, can add vocational training to their competencies and become e.g. a skilled mechanic, allowing the Danish Defence to benefit from their military and vocational skills”.

Although the current agreement adds about 1,000 additional soldiers to the Danish Defence, a shortage of colleagues is seen today, particularly in the group of enlisted privates. HKKF requests that the appointment of new colleagues be expedited and that the Minster do not place any more tasks with the Danish Defence than they have resources to solve.

HKKF and the Danish Defence are currently looking into the possibility of establishing a vocational training programme for the enlisted privates. That would provide the individual soldier with documentation of his or her skills that can also be used in the civil life. It would help the Danish Defence retain and recruit soldiers. And it would be for the benefit of society by lifting a large group of people from being unskilled to being skilled. HKKF hopes that the new Minister will also support the project.

Many enlisted privates leave the Danish Defence after a short period. It is expensive to constantly train new soldiers that quickly leave the Danish Defence again, and the lack of retention has an impact on well-being, motivation and work load. In the long term, HKKF believes that training to become a skilled soldier will strengthen retention. In the short term, it is about ensuring proper conditions for the soldiers in terms of pay, working conditions, equipment and work load.

Despite massive support for veterans from all parties in the Danish parliament, HKKF still does not believe that the veterans most affected by PTSD get the necessary help. Therefore, HKKF recommends extending the project “God hverdag” (Good everyday life) which has shown impressive results when it comes to helping the weakest veterans suffering from PTSD. In a pilot project, 14 out of 23 participants who completed the project, started as trainees, had a full-time job or started an educational programme. The experience of all participants was that they had got a better and more structured everyday life.

The original version of the article is available here. For more information, please contact HKKF.