You are here:Home » Members news » First Demonstration of Military Trade Unions in Italy 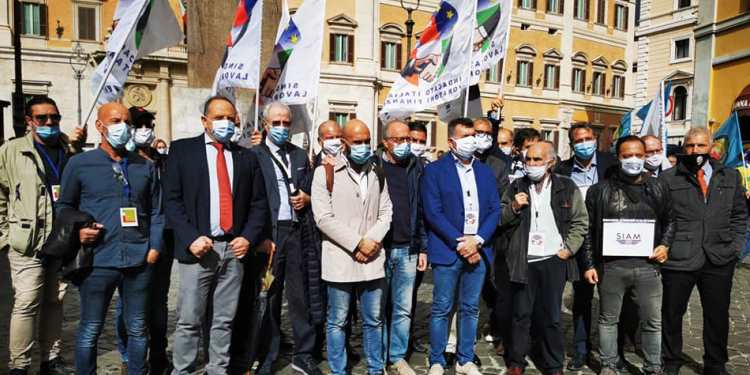 Read below an article our Italian member ASSODIPRO wrote on the demonstration. For more information, please contact ASSODIPRO.

THE SQUARE IS JUST THE BEGINNING. THE CORDA BILL MUST BE CHANGED AND THE GOVERNMENT MUST ALSO HEAR THE UNIONS ABOUT THE CONTRACT

However it goes, it will have been a success!

Because it was the first historic time in the square (and what a square, about 300 military people) for the unions of military personnel (unfortunately not all of them! Some did not join, some others withdrew in extremis) and because we showed courage, awareness and maturity.

Courage, because there is no risk of talking to the political-institutional coverage (in the Commission or in party offices), because it is easy to write articles for specialized sites (especially if anonymous), but to go down the streets and put your face is something more. Considering the threats of disciplinary sanctions officially delivered by SMD to the Joint Forces unions and by the Army, Air Force and Carabinieri Staff to their respective unions.

Awareness, because we have represented and exposed our claims with precision and with legal and logical reasons in support.

Maturity, because everything took place in a calm manner and tone respectful of the anti-contagion rules and of the delicate moment that the country is experiencing. We thank the people (many Guardia di Finanza) who participated with us in the demonstration and the whole world of police and confederal trade unions that supported the initiative.

The hope is that, thanks to the demonstration and the seemingly opportune doubts expressed by the M5S group in the Commission Defence of the Senate, something has moved and that the disappointing “CORDA BILL” born from the majority / opposition pact in the Deputies Room can be corrected in the Senate.

However, we have no illusions, beyond the openings of Sen. Mininno, the reactions of Undersecretary Calvisi (“we will listen”) and President Pinotti (specificity) and the silence of Ministers Guerini (Defence) and Gualtieri (Economy), of the honorable Corda and Aresta and of the Senators Vattuone and Gasparri do not promise much.

On the other hand, it seems that the government is willing to open negotiations for the next contract renewal without hearing from the unions and this, unfortunately, says a lot.

Be clear! Yesterday’s is just the beginning, we will continue, in every seat (Parliament, national and international courtrooms, media and squares) and in every way permitted by law, to claim the right of military people to have an effective protection instrument , independent and functional, certainly not the substitute for the current representation, very well payed, designed by the Corda Bill.

Jubilee XXV. Anniversary of the International Military Ascent to Kriváň