You are here:Home » Highlight post » Fiftieth Anniversary of EUROMIL 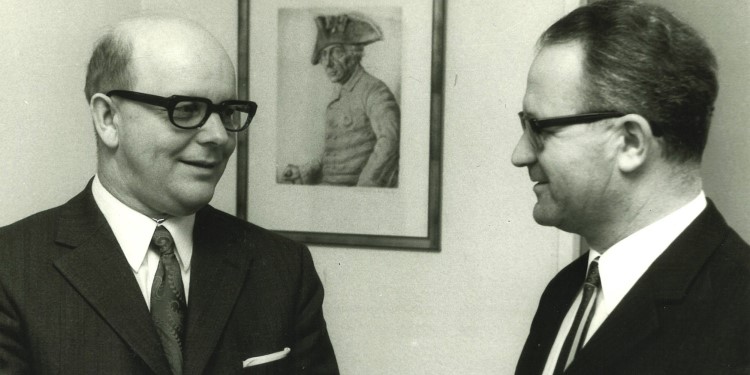 EUROMIL was founded on 13 September 1972 in Bergsch-Glabbach, Germany. Our German Member Assocation, DBwV, published an article in their magazine by Michael Rudloff, reminding us of the events of EUROMIL’s establishment. The original article can be read here in German and is translated into English below.

With diplomatic skill on the way to EUROMIL

An ashtray for peace pipes became the symbol of the beginning of cooperation between European soldiers’ associations.

When the 8th General Assembly of the DBwV convened in the Bad Godesberg City Hall on 17 June 1969, Federal Chairman Heinz Volland was able to welcome top representatives of 14 partner military associations on official missions for the first time, in addition to foreign military attachés. They had come from Belgium, Denmark, Norway, Austria, Sweden and Switzerland. Already on the evening before the general meeting, they got to know each other better at a joint dinner in the Godesberg Park Hotel. During this meeting, thoughts were voiced about consolidating the cooperation between the soldiers’ associations in order to exchange experiences on how the social interests of military personnel can be effectively represented in a Europe that is growing together.

The common goal of improving the social situation and social recognition of soldiers and their families was pursued by the associations in different ways and under conditions that could hardly be more different. In the Nordic countries, the soldiers’ right to organise was guaranteed by law, whereas in south-western European countries as well as Great Britain and France it was taboo. Soldiers in the armies of NATO partners the USA and Canada did not know such a right either. While the DBwV united soldiers of all military status groups, in the other associations officers, non-commissioned officers and sergeant grades were organised in separate associations. In some countries there were also organisations that differed ideologically. Four associations from Norway alone took part in the DBwV general meeting. In a greeting address, the Norwegian Tor Berge expressed his “great admiration… for the way in which it has been understood in Germany to build up a professional organisation of soldiers of all ranks”. The President of the Danish Officers’ Association, Major General Engell, pleaded for not limiting oneself to specific group interests, but to work together with cooperation partners for social and security policy goals. The Swedish officers, non-commissioned officers and sergeants, who were organised in separate associations, had astonishing things to report. Since 1966, they even had the right to strike if no agreement could be reached with the employer during negotiations.

A precious vase presented by the representative of the Danish Sergeants’ Association, Jens Rotbøll, was topped by the joint guest gift from the Swedish associations: an oversized glass bowl. The chairman of the Swedish Officers’ Association, Colonel Sten Lungqvist suggested in his speech that it be used “as an ashtray for the peace pipe, which I hope will burn brightly between the federation and the economic authorities of your country.”

The guest gift, however, was more likely to have been needed for the negotiations between the leaders of the soldiers’ associations. Agreement was quickly reached on the goal of forming a European umbrella organisation. On the way there, diplomatic skill was required. Immediately after the 8th General Assembly, Heinz Volland visited the Belgian officers’ association. Talks with two other Belgian associations and a soldiers’ association from Luxembourg followed. An intensive exchange linked the DBwV with the Danish NCO Association. By September 1970, the DBwV had established relations with soldiers’ associations in seven West European countries in this way.

When comparing the conditions in the national armed forces of the allied European states, the striking differences in the unequal entitlement to form professional organisations with bargaining rights became apparent. In the countries with a longer tradition of recognised military interest groups, professionalism again made it difficult to join forces. Heinz Volland reported on the challenge of bringing representatives of officers and non-commissioned officers from Belgium and the Netherlands into the same room and around the same table. Under no circumstances were they to be placed side by side. Not to be underestimated was the still present memory of the world wars. The idea of an organisation in which German soldiers played a formative role met with reservations. The difficulties of the beginning were summed up by Jens Rotbøll as President of EUROMIL at a later general meeting: “We first had to learn to understand each other, not only in language, but also in thought.”

The appropriate setting for the organisational preparation of the European federation of soldiers’ associations was provided by the ceremonial opening of the DBwV’s newly built federal headquarters in Bonn’s Südstraße on 10 November 1970. Representatives of twelve soldiers’ associations from Denmark, Norway, the Netherlands, Belgium and Italy had accepted the DBwV’s invitation. In the first conference in the new house of the DBwV, they discussed concrete steps for the formation of a common umbrella organisation with the Federal Board of the DBwV on 11 November.

On 13 December 1970, the foundation stone for the European Organisation of Military Associations with its provisional headquarters in Bonn was laid in the house of the DBwV. The name “EUROMIL” was based on a proposal from Belgium. The goals of the new organisation were kept quite general and with low stakes. They consisted of the following:

– to deepen the understanding and friendship between the peoples.

– to cultivate the regular exchange of experiences between the member associations, and

– to promote the general idealistic, social and professional interests of the soldiers.

Nevertheless, only the representatives of the Danish NCO Association, five Belgian associations, the Dutch Sint Martinus, and the DBwV signed the declaration on future cooperation. They elected the Dane Christian Sørensen to head the provisional presidium. He was chairman of the umbrella organisation Centralforeningen for Seniorsergenter og Stampersonel (CSS), which represented almost all longer-serving Danish soldiers below officer rank. The committed social democrat was very well connected in the Ministry of Defence. Heinz Volland became one of the three vice-presidents. The Presidium took on the task of drafting the final statutes of the organisation, preparing the convening of a General Assembly and winning over other interested soldiers’ associations in Europe to join.

The representatives of the associations from Norway, Italy, the Danish officers and a Dutch association indicated a need for discussion and did not sign the joint declaration. Nevertheless, they held out the prospect of joining at a later date. The secretary and, later EUROMIL secretary, Guido Daleman remembers that the officers’ associations had problems with the fact that Christian Sørensen, who at that time held a rank comparable to the German staff sergeant, was not an officer. From the Netherlands, Ons Belang (the former Royal NCO Association of the Air Force and Army of the Netherlands, now AFMP) did not want to participate because a rival NCO association was involved.

The response to the efforts of the provisional presidium to get other associations from as many European states as possible to join the umbrella organisation that was undergoing establishment remained manageable at first. The reasons for this were manifold. Some federations had only limited financial resources and feared the expenses necessary for maintaining an office and travelling. Competitive thinking, the difficult political conditions in individual countries and uncertainties about the future of the European federation caused rather reserved reactions.

In the meantime, the provisional presidium pushed ahead with the official foundation of EUROMIL and prepared the first general meeting. After almost two years of preparation, on 13 September 1972, the time had finally come. On that day, the official foundation took place in Bergisch-Gladbach. Christian Sørensen was confirmed in his office and unanimously elected as the now official President of EUROMIL.

Until then, many peace pipes had to be smoked. Whether the Swedes’ crystal ashtray was used is not known.