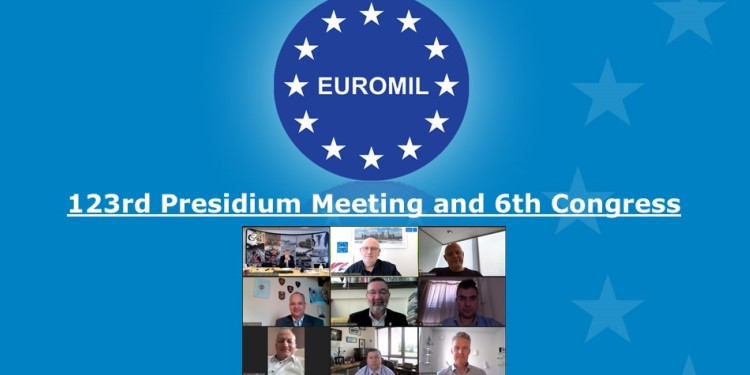 Delegates elect a new Board and discuss racism and far-right extremism at the 123rd Presidium Meeting and 6th Congress of EUROMIL.

On 22-23 April 2021, over 60 delegates from EUROMIL member associations across Europe participated in the 123rd Presidium Meeting and 6th Congress of EUROMIL. Due to the COVID-19 pandemic, the meeting was held online.

On 22 April 2021, President Emmanuel Jacob opened the bi-annual Presidium Meeting, which approves the policy of the Board and provides impetus for the prospective further development of EUROMIL policy. The budget of the organisation was approved.

The report of the Board for the period 2016 – 2021, which highlighted the activities undertook by EUROMIL in the areas of fundamental rights, social dialogue, security and defence as well as direct support to member associations was presented. However, the Congress being in charge of the long-term policy objectives of the organisation, it was reiterated that important decisions will need to be taken for the future of EUROMIL.

On 23 April 2021, delegates reconvened for the Presidium Meeting. In this framework, a public panel discussion on “Tackling Extremism in the Armed Forces” was organised in the morning. The numerous reports of suspected or convicted extremist cases in the armed forces raised the need for a dialogue on this matter. In July 2020, EUROMIL had already published a statement on Extremism in the Armed Forces. The discussion explored the current situation with regard to systemic racism and far-right extremism in the European armed forces and discussed how to tackle this issue. It aimed at identifying best practices and making recommendations to the political and military leadership on ensuring respect for democracy, human rights and the rule of law, by combatting violence, racism, extremism, xenophobia, discrimination and intolerance in the armed forces.

Mr Momodou Malcolm Jallow (Sweden, UEL), General Rapporteur on combating racism and intolerance and Coordinator of the No Hate Parliamentary Alliance, Parliamentary Assembly of the Council of Europe, highlighted that the infiltration of far-right extremists in the security forces, particularly from the white supremacist movement, is a fact and an urgent priority. Armed forces are concerned and should therefore tackle this serious issue, which does not only threaten their functioning, but which, by undermining the peaceful coexistence of the multicultural society we live in, has an impact on society at large. Mr. Jallow presented his work at the Council of Europe, including the hearing he organised in December 2020, on this matter. He noted that the extremist threat is growing, evolving rapidly, and becoming more complex. Fortunately, awareness is increasing, and some leaders are showing political will to tackle this problem. Work remains however to be done, to further raise awareness about this phenomenon, investigate the nature and extent of the problem and address it. Mr Jallow highlighted that the armed forces play important role in the functioning of our democratic institutions. Their mission is to protect these institutions and their pillars, this means human rights, democracy and the rule of law. It is thus necessary to stop the active spread of far-right narratives and ideology, end the rhetoric of the bad apple and understand that instead of addressing individual cases, it is needed to challenge structural racism. Most of the time actions are not taken if they are not exposed. Mr. Jallow thus presented some of the recommendations made at the December hearing, which included the adoption and enforcement of robust legislation, education to vaccinate people against extremists narratives, anti-discrimination training, training to convey messages that defending the democratic state is at the core of the mission, improvement of recruitment procedures, increase the recruitment of staff from different minorities and ethnic origins, targeted action plans to tackle racism, targeted data, and independent oversight bodies and complaint mechanisms. Mr Jallow insisted that it is not enough to be non-racist, it is important to be anti-racist, to act and turn words into action.

LtCol Marcel Bohnert, initiator of the #WeAgainstExtremism campaign in Germany, emphasized that most of German members of the armed forces have nothing to do with extremism and are genuinely concerned about this issue. He spoke about the numerous scandals and suspected extremist cases that were revealed in the German armed forces since 2017, particularly in the special forces (KSK).  In early 2021, two reports, one from the parliamentary commissioner for the armed forces and the second one from the office of suspected cases of extremism in the German military, revealed the alarming rise of the total number of extremist cases in 2020. Amongst the categories of extremism, right-wing extremism is the most spread and dangerous in the armed forces. However, these are only suspected cases the sensitivity to report increased amongst soldiers. Nevertheless, these cases, reports and consequent media coverage induced a climate of general suspicion within the population. In order to correct this impression, Mr Bohnert, together with colleagues, decided to take a strong stance against extremism and started a private social media campaign with pictures of soldiers in uniform using a unique look and hashtag. Numerous soldiers from various ranks and branches participated voluntarily to this campaign. The campaign was endorsed by a wide range of members of the armed forces as well as other security forces and was supported by political authorities. This gave the impulse for a nation-wide debate. Mr Bohnert nevertheless expressed the hope that the project never ends and that more soldiers continue to join this fight.

Ms Nicola Williams, former Service Complaints Ombudsman for the Armed Forces, addressed the issue of racism and extremism in the UK armed forces, where right-wing extremism is now an important issue. The majority of personnel being white, most of the extremist cases is related to race. She acknowledged the statements made by military leaders against racism and extremism in the UK but deplored the lack of concrete follow-up actions. Presenting several examples of racists cases that were publicly disclosed during her mandate as ombudsperson, she noted that unless the perpetrators left by themselves, by the end of 2020 there was no dismissal made by the armed forces. In her views, racism should not be treated as if it was not widespread, the military organisation should tackle the problem. Moreover, racists should not have access to weapons. It is thus not acceptable to say that the society is racist so racists will be recruited. Finally, it is inaccurate to believe that some members of the armed forces may change opinions after training. If one is part of a certain type of organisation, he/she you should just be rooted out of the armed forces. Ms Williams then raised the question whether having military associations or trade unions in the UK would prevent such cases and make sure that the wrong persons are not recruited or if they are in, that they get dismissed. She emphasised the need to ensure that there is zero tolerance with this kind of behaviour, which may otherwise be corrosive to moral of existing personnel and may affect future recruitment of people from ethnic minorities.

The discussion thus also addressed the role of military associations in combatting racism and extremism in the armed forces. Mr Fidel Gomez, representative of the “United Association of Spanish Military” – AUME, explained why the issue of extremism is a concern to the armed forces and why it is particularly damaging for its mission as regards cohesion, politization, the image of the armed forces within society, public trust, missions and social integration. He then explained the infiltration of extremist ideologies in the Spanish armed forces, due to historical and political reasons resulting from the Franco legacy. Despite the Spanish transition to democracy, no attention was paid to the symbolism of the past regime and no proactive democratic pedagogy was made in the armed forces. Consequently, part of the military personnel still feels tight to traditions imposed by the dictatorship. Mr Gomez outlined several events that were covered by the media in the end of 2020 – beginning of 2021, which demonstrated the links between some members of the armed forces and extreme right-wing political actions. The reaction of AUME before these events was to contact the ministry of defence to express concern about the emergence of associations with ideological bias as well as the penetration of far-right in the barracks. AUME also submitted a motion to the Council of personnel to strengthen knowledge of the constitutional principles and democratic values in the armed forces. However, there was no reaction and the motion was not adopted. Nevertheless, Mr Gomez underlined that in order to tackle extremism, education is key. Other recommendations included democratic pedagogy, training on democratic values, respect for human rights, exercise of fundamental rights, promotion of concept of Citizens in Uniform, and keep permanent watch on attitudes and behaviours not democratically acceptable.

During the subsequent Q&A session, the issues of the military as a hierarchical institution and the lack of rights within the armed forces (including the rights to freedom of association and to freedom of speech), were addressed as fertile ground for radicalization. Moreover, the problem of people sent overseas having the possibility of showing their ideology and commit crimes was highlighted as being problematic. The need for political, historical but also psychological education was added. The importance of diversity and inclusion and thus the need for more recruits from different minorities and ethnic origins was again highlighted. It was further emphasised that armed forces and associations should play their role and that all platforms should be used to address this issue.

The discussion was moderated by Ms Caroline Henrion, EUROMIL Policy Manager. She concluded that extremism is a threat to the European values of diversity and equality as well as to the safety of the people which requires that all stakeholders, at national or international level, including ombuds institutions, trade unions and civil society work together, hand in hand, to ensure equality, respect and dignity for all, within the armed forces but also in their external interactions. Recommendations from the discussion included the need for efficient legislation, policies and action plans, good education and training, quality data, strong leadership, more diversity in institutions, safe space to talk amongst colleagues, the need to encourage self-reflection, to fight unconscious bias and disinformation, and of course to have sanctions and accountability mechanisms. The ‘watch-dog’ role of military associations and trade unions was highlighted as being fundamental in protecting democracy and human rights and for creating a more diverse and inclusive environment. States should thus create an enabling environment for representatives of military personnel to operate. Finally, Ms Henrion stated that “EUROMIL rejects and condemns all forms of racism and intolerance and will remain firm in its positions. The armed forces need to reflect and protect the people they serve”.

The video recording of the panel discussion is accessible here.
The videos of the “We Against Racism” campaign in Germany are available here (1) and here (2).

In the afternoon, the Presidium discussed internal reports and approved the request of the Romanian association OMVTO to become an observer association within EUROMIL.

EUROMIL currently counts 33 associations from 21 countries. The next Presidium Meeting will be held in October 2021 in Athens, Greece.

A Note of Thanks from Italy