You are here:Home » Euromil News » EUROMIL at the 21st Berlin Security Conference 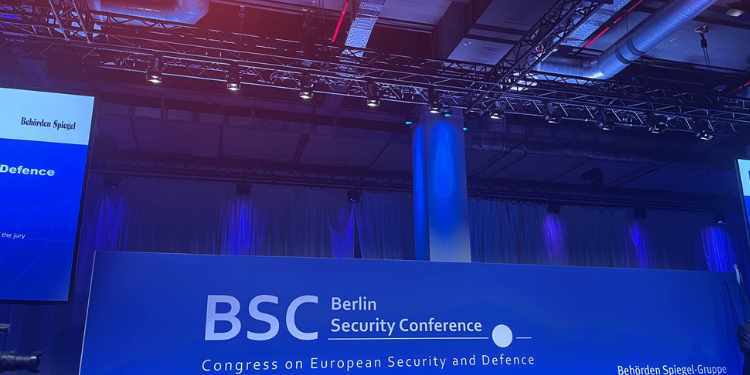 The Berlin Security Conference took place on 30 November and 01 December, this year’s topic focused on Europe and NATO, directions for action. EUROMIL participated as logo partner.

As it was the first Security Conference that took place after Russia’s unjustified aggression against Ukraine, the discussions focused on Western support towards Ukraine, the reinforcement of NATO through its new Strategic Concept, the development of cutting-edge capabilities through cooperation with the European defence industry and the role of the Strategic Compass in strengthening the EU security and defence policies.

To elaborate more, NATO through the new Strategic Concept is reinforcing its defence and deterrence by strengthening the eastern flank of the Alliance, as Russia has been characterised as the biggest threat to the security of the Alliance. Besides, the participants stressed that Sweden’s and Finland’s membership in NATO shows that the Alliance is more relevant than ever. The High-North and the Arctic are also posing new challenges to NATO, and according to Bjørn Arild Gram, Defence Minister of Norway, the Cold Response Exercise is just an example of how the Alliance is responding to emerging security challenges.

Germany’s Defence Minister, Christine Lambrecht, focused on the importance of providing support to Ukraine and to the fact that Germany will train Ukrainian soldiers, while Olaf Scholz, Chancellor of Germany, highlighted that Ukraine will be supported for as long as it takes. Moreover, the Minister stressed that the European Skyshield Initiative will foster cooperation between partners and Germany is also moving towards the modernisation of the Bundeswehr. NATO’s Secretary General, Jens Stoltenberg, also emphasized on the importance of the increased defence spending in Germany; the Alliance and Europe need a strong – with high-end capabilities – Bundeswehr. Germany’s decision to increase defence spending and to develop new defence capabilities has indeed been a Zeitenwende, as many participants have stated.

However, in order for Europe to develop defence capabilities, cooperation with the defence industry is necessary; the military needs new technologies and hence the policymakers need to be more pragmatic and collaborate with the industry. Overall, representatives from the defence industry underlined that they face obstacles in receiving financial support due to the taxonomy regulation, an issue that NATO Secretary General stated is discussing with his European counterparts. Strengthening the European defence industry and for European states to move towards common procurement is essential to replenish the stocks, as well as invest in R&D.

To continue, the Chairman of the EU Military Committee (EUMC), General Robert Brieger, presented the Strategic Compass’s four baskets (Act, Secure, Invest, Partner) and stated that the EU has never achieved so many in too little time, as the Military Mobility Action plan 2.0, the use of the European Peace Facility at its full potential or the expansion of the EU Maritime presence. It was also highlighted that the concept of EU strategic autonomy is often misinterpreted; autonomy is about the EU being able and capable to act alone when necessary and when support is not available. The importance of the development of the Rapid Deployment Capacity (RDC) was also highlighted. RDC will be constituted with up to 5000 troops with all the strategic enablers and it will be fully operational in 2025. Riho Terras, Member of the European Parliament, also underscored that EU defence is no longer neglected and is supported by the European Commission and that there could be a defence pillar at the next Commission.

Lastly, the participants focused on the significance of the Reserve forces and the fact that it is necessary to have forces and systems that are intact. Hence, it is high time for policymakers to move towards decision-making in this regard.

Overall, this year’s Berlin Security Conference underlined that a Zeitenwende is happening; Finland and Sweden decided to join NATO, Germany increased its defence spending and the EU is strengthening its defence capabilities, just a few examples of the turning point in Europe.