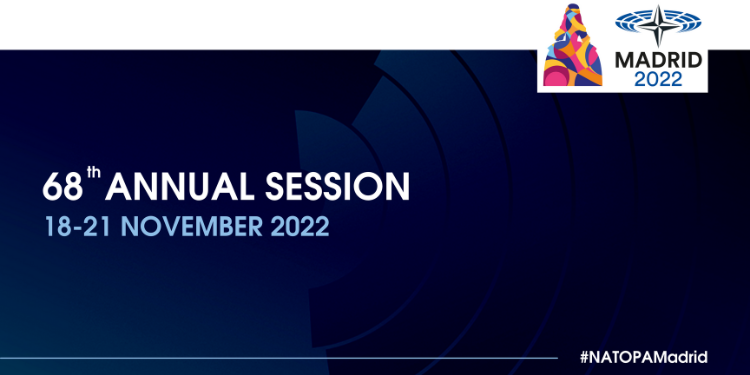 From 18 to 21 November 2022 the NATO Parliamentary Assembly (NATO PA) gathered for its 68th Annual Session in Madrid, Spain. In June 2022, Madrid hosted NATO’s transformative Summit and adopted, among others, the Strategic Concept. Just some months later, the Cortes Generales hosted the NATO Parliamentary Assembly’s Annual Session in Spain’s capital.

The NATO PA members from the 30 NATO member nations and about 100 members from some of the 25 partner countries and parliamentary bodies had the opportunity to assess how decisions made at the NATO Summit align with the Assembly’s recommendations for NATO’s new Strategic Concept. Of course, Ukraine and Russia were high on the agenda. The PA members also discussed the implementation and operationalisation of the decisions taken, as well by the NATO PA as in their national parliaments. During the debates in committees as well as in the plenary session, the members demonstrated the Assembly’s resolute stance on Russia’s unprovoked, unjustified and brutal war against Ukraine and their support for the country.

Almost traditionally, the DSC invited Margarita ROBLES, Minister of Defence of Spain and Admiral General Teodoro E. LÓPEZ CALDERÓN, Chief of the Defence Staff of Spain. Both presented the role of Spain since it joined NATO 40 years ago as well as the current and future national and international challenges. Defence Minister ROBLES stressed the importance of the complementary cooperation between the European Union and NATO. Both expressed their sympathy and support to the Ukrainian people but also honoured the more than 125 Spanish soldiers who lost their lives during NATO operations over the past decades.

Clint REACH, International Defence Researcher at RAND Corporation, presented his views on the political origins of Russia’s war on Ukraine. He also looked at the military situation in Russia and Ukraine in the past years, but also at the current situation and the possible future. During the debate, one of the main items was the unpredictability with which this invasion and war started. 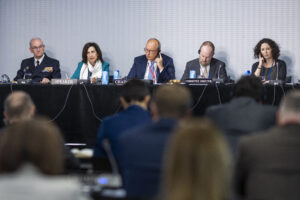 The rapporteurs presented the revised draft reports that were already discussed in Vilnius (Lithuania) during the Spring session. Terrorism, cyber, Ukraine and NATO’s post-Madrid summit deterrence and defence initiatives were just some of the reports that have been approved. Linked to these issues, two more presentations came on the agenda on Sunday. Marina RODRIGUEZ, Head of the Cybersecurity and Fight Against Disinformation Unit, Office of the Prime Minister of Spain presented on “The Growing Cyber Challenge and Implications for the Alliance”. She emphasised that it is key to invest in talent, technology and information. It is for example important, also for the private sector and all concerned workers, to organise cyber exercises. Numbers show that especially during the first year of COVID, the number of cyber-attacks and hackers raised significantly. Now that homeworking is part of the working conditions in all sectors, more attention to security measures is needed – and this not only in critical sectors. Gabriele CASCONE, Head of the Counter-Terrorism Section, Emerging Security Challenges Division, NATO presented on his turn NATO’s role in counterterrorism, looking at its background, status and future. In Mr Cascone’s opinion, resources are one of the problems to deal with. Another point that was raised revolved around how to make sure that we keep our experiences in this field up to date in the future: training and testing are key elements. He also stressed that the capabilities in this field should not be seen as exclusively for counterterrorism and have without doubt a broader use.

In this article, we will not go into detail about all the reports that have been adopted. However, the Special Report on “Ukraine’s fight for freedom & allied and global response to Russia’s war” presented by the Special Rapporteur Rick LARSEN (US) needs some more attention. In his report, the rapporteur looks at the war in three distinct phases, as well as the parallel evolution of the coordinated Allied and partner assistance to Ukraine. Reading the report, one has to keep in mind that the war was in its eight-month when the report was written. It is most interesting to see a chapter on the humanitarian situation in this report. Mr LARSEN emphasised that being an American Congressman, his report also reflects the position taken by the US Congress. Interesting to hear from the full US delegation, as well from the Democratic and the Republican Party, was that whatever the majority in Congress is, they both fully support these views.

Finally, the SDC discussed a draft resolution on “Supporting NATO’s Post-Madrid Summit deterrence and defence initiatives”, presented by the General Rapporteur Cédric PERRIN (France). After amending and strengthening the draft, the resolution has been approved by the Committee and forwarded for final approval by the plenary session on Monday.

Last but not least, several Committee and Sub-Committee Officers needed to be elected or re-elected. The British Conservative politician Alec Edward Shelbrooke, Member of the UK Parliament since 2010, was elected Chair of the Defence and Security Committee.  He has a long political career and served recently, from September 2022 to October 2022, as Minister of State for Defence Procurement in the Ministry of Defence.

The Plenary Sitting has been held on Monday 21 November 2022 and opened by the President of the NATO PA, US Congressman Gerald E. CONNOLLY. 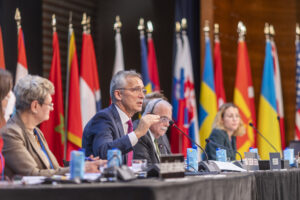 After the traditionally invited national speakers from Government and Parliament, the Secretary General of NATO, Jens STOLTENBERG, addressed the Assembly. In his opening statement, the Secretary General addressed of course the Russian invasion of Ukraine. Russia underestimated both the resilience of Ukraine and the international solidarity. He added that anyway, we should not make the mistake to underestimate Russia. About negotiations to end the conflict, Jens Stoltenberg repeated that more support for Ukraine will be needed, both from a military and diplomatic perspective. This war must be ended at the negotiation table, but military intervention should not stop before. It is needed, the Secretary General emphasized to make sure that Ukraine will be an independent country as it was in the past. Regarding Russia, he stated that it is no longer a strategic partner, yet the Alliance’s biggest threat. This has also been made clear in the recently approved new Strategic Concept.

About the enlargement of NATO, the application from Finland and Sweden came back in his statement but also at large in the questions of the Assembly members. At this moment, 28 out of 30 members ratified the membership application. It is high time, Stoltenberg added, to end this procedure as soon as possible. However, he also added that this is the quickest application procedure ever in NATO’s history. In Stoltenberg’s view, it is important that both countries join the Alliance also for the European Union. Once done, 96 % of the EU citizens will also be NATO members and making both EU and NATO stronger, bringing them closer. At this point, he also emphasized that he welcomed the EU efforts, such as PESCO and the EPC, but that it must be clear that it should be seen as complementary to NATO, and not as a competition. Security, Stoltenberg added, depends on the strength of the transatlantic link. Already at this point, and with a new collaboration agreement coming up, the EU – NATO collaboration is at an unprecedented level in the Secretary General’s view.

Several remarks touched upon the 2% pledge discussion. Stoltenberg made clear that in the past eight years an increase in our common defence spending is noticeable. However, he expects that this will be a decision at the 2023 Vilnius Summit. The 2% should be the base expenditure and not the peak to be reached. He expects at that point stronger commitments and increased ambitions.

At the occasion of this 68th Annual Session, Ukraine’s President Volodomyr ZELENSKY addressed the Assembly online. This much-applauded speech was followed by the award ceremony for the “Women for Peace and Security” price, which was granted to Olha STEFANANISHYNA, Deputy Prime Minister for European and Euro-Atlantic Integration of Ukraine.

Finally, six resolutions from the different Committees were presented to and approved by the Plenary Session. 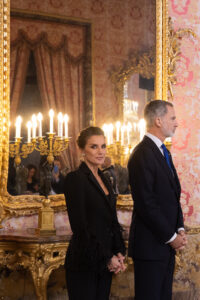 These Resolutions can be found on the Session’s website. These resolutions touch, among others, on the situation in Ukraine, NATO post-Madrid but also on climate change and international security. We must underline that the latter is increasingly becoming higher on the agenda of security debates: His Majesty King Felipe VI addressed the issue in his speech at the occasion of the reception that he and Queen Letizia offered to the NATO PA participants in the Place on Sunday evening.

The next Parliamentary Assembly (Spring) Meeting will be held in Luxemburg in May 2023.

Further detailed information, such as the approved reports and resolutions, on the 68the session of the NATO PA can be found here.

This is the most recent story.