You are here:Home » Euromil News » 9ICOAF: “The Moral Compass of the Armed Forces: How Ombuds Institutions Can Break Down Barriers to Achieve Change”

9ICOAF: “The Moral Compass of the Armed Forces: How Ombuds Institutions Can Break Down Barriers to Achieve Change” 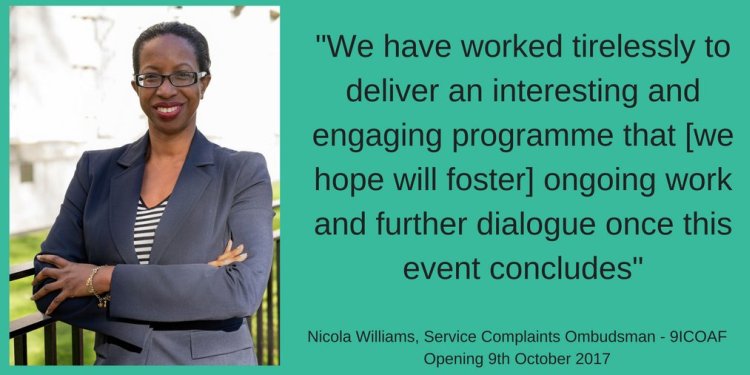 From 8-10 October 2017, the Geneva Centre for the Democratic Control of Armed Forces (DCAF) and the Service Complaints Ombudsman of the Armed Forces of the United Kingdom organised the 9th International Conference of Ombuds Institutions for the Armed Forces (9ICOAF) in London. Lt Gen Richard Nugee CVO, CBE Chief of Defence People (CDP) said in his keynote speech: “We are here in the Tower of London, a place where you would probably have ended up in prison, when you complained to much”.

As was the case in previous years, the conference reached out to representatives of ombuds institutions for the armed forces from nearly forty countries from Europe, Africa, Asia, Australia and Central and South America. Through this conference, ICOAF has been able to further strengthen its function as a platform for promoting democratic oversight of the armed forces and preventing maladministration and human rights abuses. However, it is recognised that each national context is unique. In the conference statement, the participants underlined the importance of ongoing international dialogue among ombuds institutions to promote and protect human rights and fundamental freedoms within and by the armed forces. EUROMIL promotes these principles as well and is an active participant since the first ICOAF meeting.

The 9ICOAF discussed in several plenary sessions and breakout groups the following topics:

– Maximising the Role of Ombuds Institutions within Ethical and Legal Boundaries.

Codes of ethics are useful tools to provide clarity on or formalize unwritten standards for professional conduct within the armed forces, especially on ethical dilemmas. They are however, not the only way to contributing to a culture of ethical behaviour in the armed forces. Continuous ethics education and training are necessary.

The armed forces have a duty of care to its personnel, which includes both physical and psychological support. Ombuds institutions should be prepared to refer persons to resources available to them and investigate why care was not provided.

The armed forces should represent the ethical values of a society, as well as the diversity of a society. Ombuds institutions can promote diversity make sure that all persons can freely and actively participate in the armed forces irrespective of their gender, religion, sexual orientation, race, ethnicity or age.

– (Why) Are Armed Forces personnel reluctant to complain?

EUROMILs President Emmanuel Jacob, was leading one of the breakout groups on this topic. Discussing the issue with military ombuds institutions from Ireland, Canada, the UK, South-Africa and Norway, this group came to the conclusions that in general – even if Ireland seems to be an exception – military are reluctant to complain. It became however also clear that once ombuds institutions reach out to the military and explain them how they work and what their competences are, the number of received complaints raised. This was for example the case in the UK.

The breakout group also found that even veterans, notwithstanding the fact that most of them are no longer in active service, are reluctant to complain. The same goes for military personnel in operations. The reasons therefore could be of economic nature, but also the “esprit de corps” not to harm the military institute.

Last but not least it has been discussed that especially bullying and sexual harassment are situations that are probably underreported. There are however no data available in the participating countries, but an initiative that has been taken in Norway to list up problematic situations through a climate study and compare these issues with the number of complaints, reinforced this conclusion.

Meanwhile the preparations started for the tenth edition of the International Conference of Ombuds Institutions for the Armed Forces. For this jubilee edition the South African Military Ombudsman will host the meeting early October 2018.