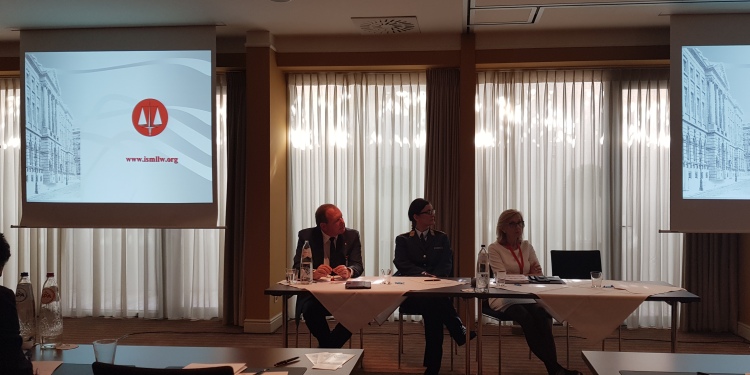 From 18 to 21 September 2017, the Belgian Group of the International Society for Military Law and the Law of War (ISMLLW) organised the second ‘Silent leges inter arma?’ conference. This international conference brought together practitioners and academics active in the field of law, security and defence from a wide variety of countries, to discuss the following topics:

The conference was opened by Ambassador Claude-France Arnould, Ambassador of France to Belgium. She was introduced by Mr. Ludwig Van Der Veken, Chairman of the Belgian Group and Secretary-General of the ISMLLW.

EUROMIL actively participated in the conference. President Emmanuel Jacob was invited to chair the first panel on the rights of military personnel.

EUROMIL’s President used the opportunity to introduce the session with an overview on human rights in general and the right of association and trade unionism in particular for military personnel in Europe.

The panel consisted of three distinguished speakers who contributed to a better understanding of the current socio-professional situation of military personnel in Europe.

Lieutenant Colonel Martina Hojka, Medical Advisor of the European Union Military Staff focused on medical support. She highlighted that health care and medical support remain a national competence, even if staff is deployed in CSDP missions. A lack of common EU-wide standards and the resulting lack of interoperability of instruments is however hampering the cooperation on the ground.  She expressed her hope that the EU Medical Command will be able to better coordinate medical support in the future.

Brigadier General (ret.) Jan Peter Spijk, Honorary President of the ISMLLW elaborated on the question whether harmonized social standards for military personnel in the European Union are a “need to have or nice to have”. He highlighted that labour conditions and regulations do not happen in a vacuum but always have to be analysed in their national context, where questions of sovereignty but also budgetary and financial considerations play an important role.

In the subsequent discussion, participants discussed possibilities to harmonize the socio-professional conditions of European military personnel, eventually by means of sending military personnel for CSDP missions as “real European” paid by EU funds.

EUROMIL was pleased to discuss this important topic with distinguished ISMLLW members and will certainly follow-up on the issue.