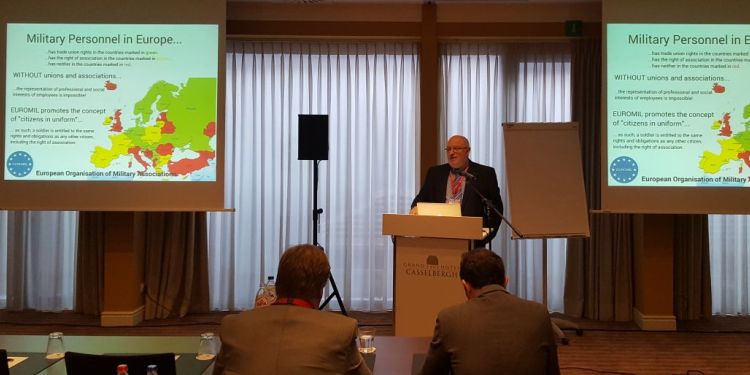 From 20 to 22 September 2017, the Belgian Group of the International Society for Military Law and the Law of War (ISMLLW) organised the first ‘Silent leges inter arma?’ conference. This international conference brought together practitioners and academics active in the field of law, security and defence from a wide variety of countries, to discuss the following topics:

The conference was opened by Mr. Herman Van Rompuy, President Emeritus of the European Council, Minister of State and President of the European Policy Centre. He was introduced by Mr. Ludwig Van Der Veken, Chairman of the Belgian Group and Secretary-General of the ISMLLW.

EUROMIL actively participated in the conference. The Society’s statutory aim is to study and disseminate international humanitarian law, military law, the law of peace operations, and related legal domains. However, in the past the ISMLLW only once touched upon the issue of human rights for military personnel. At its Congress in May 2012 in Quebec (Canada), EUROMIL’s President, Emmanuel Jacob, participated as a speaker in the first panel session on human rights for military personnel. At the Bruges Conference, Emmanuel Jacob was invited to chair the second session on this issue.

EUROMIL’s President used the opportunity to introduce the session with an overview on human rights in general and the right of association and trade unionism in particular for military personnel in Europe. The two panellists were Mr. William McDermott, Project Officer, Policy and Research Division, Geneva Centre for the Democratic Control of Armed Forces (DCAF) and Dr. Rain Liivoja, Senior Lecturer & Branco Weiss Fellow, Melbourne Law School, University of Melbourne, Australia.

Mr. McDermott presented DCAF’s Handbook on Human Rights and highlighted some areas in which human rights of armed forces personnel have evolved over the previous decade. Especially the ombudsinstitutions, attention for women in the armed forces and transgenders serving in the armed forces are issues that became more prominent since the publication of the handbook in 2008. EUROMIL is looking forward to the update that has been announced by McDermott and is available to participate in an active way at the update.

Dr. Rain Liivoja presented a study on human rights in military medical care. Rain Liivoja touched upon the issue of involuntary medical examination or treatment and its interference with the right to private life: The protection of personal medical data is of fundamental importance to a person’s enjoyment of his or her right to respect for private life. In his presentation, Dr. Liivoja referred to several documents and institutions dealing with the issue such as the Human Rights Committee, the former European Commission of Human Rights (ECmHR), the European Court of Human Rights (ECtHR) and the United Nationals Human Rights Committee (UNHRC) as well as the European Convention on Human Rights and the International Covenant on Civil and Political Rights and many others. This issue of human rights in military medical care in particular and human rights of military personnel in general, will surely be discussed again during future events of the ISMLLW.