You are here:Home » Euromil News » 114th Presidium Meeting of EUROMIL in Brussels 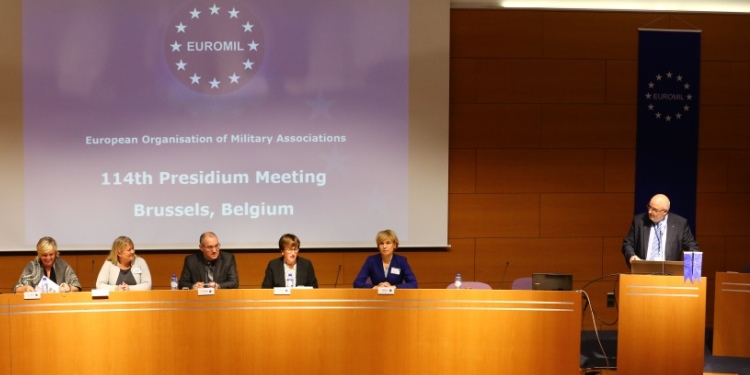 On 20 and 21 October 2016, more than 80 delegates from 24 member associations of EUROMIL came to Brussels for the 5th Congress and 114th Presidium Meeting. The Congress elected its new Board on 20 October 2016 and was followed by an evening reception to welcome the new Board together with external guests.

The morning session of the Presidium Meeting on 21 October 2016 was open to the public. Emmanuel Jacob, President of EUROMIL, opened the meeting with a short speech, referring to the ongoing discussion to enhance cooperation in security matters in the European Union. He reiterated EUROMIL’s call not to forget the social dimension of cooperation – the right of association as one of the most basic fundamental rights not to be denied to soldiers.

Three keynote speakers elaborated on the current security situation of the European Union and were followed by a panel discussion on the topic of women in the armed forces.

The first keynote speaker, Ambassador Marc Michielsen, Director for Security in the Belgian Ministry of Foreign Affairs, referred to the changed security situation the European Union finds itself in and welcomed the EU Global Strategy presented by the High Representative Mogherini this summer. The member states as well as the European External Action Service (EEAS) are now working on the implementation of the strategy, discussing four specific areas of enhanced cooperation (capability development, defence cooperation, review of financial instruments, resilience of partners).

Dr. Julia De Clerck-Sachsse, Adviser Strategic Planning in the EEAS, shared her experiences of the drafting as well as implementation process of the EU Global Strategy  with the central idea that today’s world is more connected,  although more contested and complex. The strategy seeks to respond to a growing sense of insecurity amongst European citizens by clearly stating that the European Union is prepared to work together, engage in the world and protect its citizens at home.

Ambassador Marriët Schuurman, NATO Secretary General’s Special Representative for Women, Peace and Security, highlighted, that in the view of NATO, a response to the changing security environment has to “dare to be principled”. Only by promoting its values, the Alliance will be able to defend its societies. In this regard, she emphasized that “gender equality is not optional but fundamental”. It is proven that mixed teams are smarter and more efficient. Inclusion and equal rights and opportunities in the armed forces are therefore a precondition for the resilience of societies and the readiness of the armed forces. As all change processes need strong and engaged leadership, the Ambassador called on EUROMIL and its member associations to act as leaders for change, working towards more inclusion and equal rights within the armed forces.

The panel discussion started with Senator Maryvonne Blondin, Member of the Parliamentary Assembly of the Council of Europe (PACE) who presented the PACE resolution “Women in the armed forces: promoting equality, putting an end to gender-based violence”. As gender equality and human rights in the armed forces have been in the media spotlight in the past years, the Senator decided to bring the topic on the agenda of the PACE. The resolution acknowledges that there is a growing demand for qualified personnel to serve, while at the same time men and women need to be motivated to stay in the armed forces once recruited. A possible solution for both challenges would be full equality and the end of gender-based violence. PACE recommends therefore to change the recruitment campaigns, to create a more favourable climate for women, mainstream gender equality in military training and to implement clear career prospects, including work-life balance.

Daniel de Torres, Deputy Head Operations III at the Geneva Centre for the Democratic Control of Armed Forces (DCAF), moderated the debate. He reminded the audience about the very challenging security landscape the keynote speakers had referred to and pointed to the fact that it puts increasingly high demands on the security forces. Only by being open to reforms and welcoming new talents, security forces remain strong enough to deal with the new demands.

Hilde Vautmans, Member of the European Parliament, shared the experience from the beginning of her professional career. When she  attended the first meeting on defence matters in her function of assistant to the Belgian Prime Minister, she was the only woman  in the room. Today, the scene is changing and many European countries have a woman serving as defence minister. However, the issue of women in the armed forces remains relevant and needs to be promoted – Vautmans suggested to bring it on the agenda of the European Parliament.

Lieutenant Colonel Nevena Miteva, Chair of the NATO Committee on Gender Perspectives, presented the NATO data on women in the armed forces. While on average, 10,3% of the allied armed forces are women, she emphasized that good policies are in place but their implementation needs to be fostered. By means of a powerful video she underlined that not only smart policies are needed but also a fundamental change in mentalities. As chairlady of the Bulgarian Armed Forces Women Association (BUAFWA), Miteva also pointed to the fact that associations and networks of women can help them to have their voices heard.

Lieutenant Colonel Lena Kvarving, serving in the Norwegian Armed Forces, agreed with the previous speakers in pointing out, that politicians are in charge of taking decisions enabling diversity and equal rights, even though implementation might sometimes be hard. As an example for successful standard setting, she referred to the Special Forces of the Norwegian armed forces, where an “all-women-team” was set up. Furthermore, value-based recruitment campaigns seem to be an effective mean to attract men and women to serve in the armed forces.

Questions from the audience reflected the divergence between having a good policy and implementing it in an effective way, guaranteeing the equal rights of servicemen and –women.

Zdenko Baranec, from the Slovakian association ZVSR reported about the situation of women in the armed forces in the Visegrad countries.

During the afternoon session, the Presidium adopted new rules of procedures, discussed finances as well as the national reports. It accepted the application of the Armed Forces of Malta Union (AFU) as a full member. EUROMIL counts now 33 member associations from 21 countries. The next Presidium Meeting will be held in Berlin, Germany in April 2017.