You are here:Home » Members news » XIXth Meeting of the Leadership of Representative Organizations of Professional Soldiers and Military Pensioners of the Visegrad Group Countries 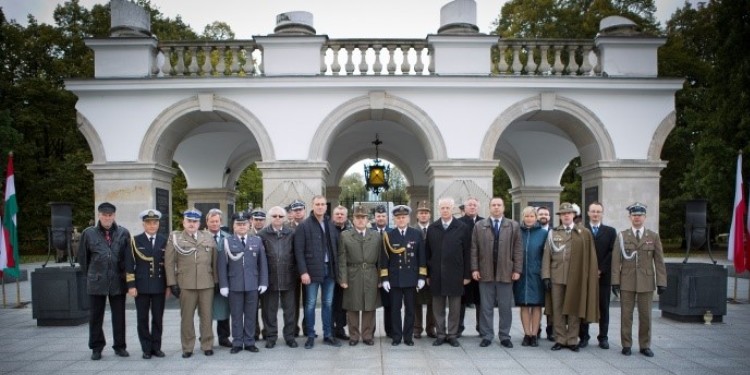 On 3-6 October 2017 Polish KONWENT organized the XIXth Meeting of the leadership of representative organizations of professional soldiers and military pensioners of the Visegrad Group countries.

During the meeting, under the auspices of Under-Secretary of State in MOD PhD Wojciech Fałkowski, took part the following representatives from:

The meetings are the forum for cooperation among the nations and exchange of experiences on military service conditions. It is also the way to solve the common problems faced by soldiers form V4 countries.

During the XIXth Meeting the delegates have summarized activities form May 2016 to October 2017 and compared models of training of military personnel for the needs of the armed forces.

Moreover, the soldier’s representatives form region of Central Europe took part in the ceremonies of laying wreath on The Tomb of Unknown Soldier in Warsaw and on The Air Force Heroes Monument in Dęblin. Czech, Slovak and Hungarian delegates as well as observers form Latvan, Lithuanian organizations, had also opportunity to get to know about tradition of the Warsaw Garrison, Air Force Academy’s training base and Aviation Museum in Dęblin.

It was also well received by authorities of Polish MOD. Minister of National Defense of Republic of Poland Mr. Antoni Macierewicz addressed the letter to the soldiers’ representatives. He expressed that: “It is an honor to host so distinguished guest on a hospitable Polish land. You are best of the best. During election campaigns military community trusted and respected your candidature. Your strong electoral mandate allows you to defend right to decent service conditions at all moments of soldier’s needs”.

Also on 3 October 2017 the Under-Secretary of State in MOD PhD Wojciech Fałkowski met with leaders of representative organizations of soldiers. Personal involvement of the authorities of MOD emphasize the importance concerning the relationships with V4 partners.

The Meeting ended by the ceremony of signing the Joint Statement. The leaders of undersigned organizations expressed that the role of social care, the economic situation of professional soldiers and the stability of their strong representation should be on the government’s agenda. It was also emphasized that capabilities of armed forces depend both on the military education system and on soldiers permanent training. The shaping of the morale attitude guarantees required behavior in the toughest moments of military service.

The leaders of the representative organizations have also agreed that the next – jubilee XXth Meeting in 2018 will be held by Hungarian Honvédszakszervezet chairmanship. As a sing of it the Chairman of Honvédszakszervezet took the presidency symbol on form of the mace.

Konwent Dziekanów Korpusu Oficerów Zawodowych is a representative body of polish professional soldiers. KONWENT has the status of an opinion-making body for legal acts and its activities concerns primary on protection of soldiers’ rights, social issues of military service and living conditions of active soldiers and military pensioners. Members of Polish KONWENT are only active soldiers. During election campaign, soldiers in all military units choose their representatives for a three years term of office.