You are here:Home » Highlight post » “Threat Multiplier” and Innovation Engine – EUROMIL reacts to the challenges posed by climate change 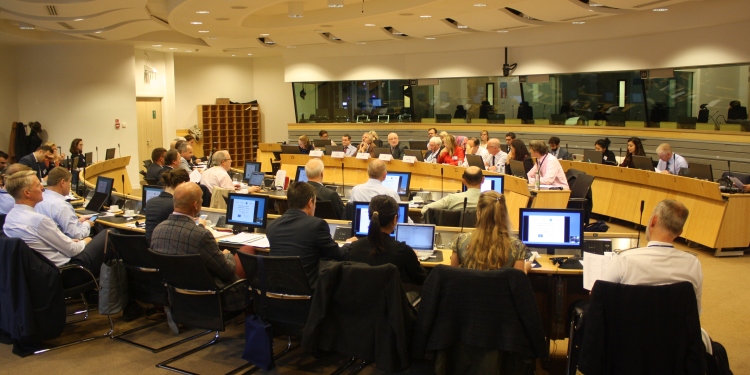 In the new Strategic Concept adopted at the NATO summit in Madrid on June 29, 2022, the defense alliance recognizes climate change as a “decisive challenge of our time with profound implications for the security of the allies”. According to the Secretary General, Stoltenberg, the participants of the NATO summit “reached an agreement on measures to combat climate change, including targets to reduce NATO’s greenhouse gas emissions and to work towards net zero by 2050. The summit also launched a new NATO Innovation Fund to help the Alliance increase its technological advantage. “A quarter of a year earlier, on March 21, the Council of the European Union approved its Strategic Compass for Security and Defense, which contains concrete steps to strengthen its resilience to climate change, disasters and emergencies. By 2025, all EU Common Security and Defense Policy (CSDP) missions and operations will have an environmental advisor and report on their environmental footprint.

On the other hand, long-term changes in the climate, constitute an accelerator for regional and ethnic conflicts. Changes in everyday life, scarcity of natural resources – such as the power to dispose of water – and the subsequent division conflicts can destabilize entire regions, trigger or intensify migration movements and lead to military conflicts.

Even if the challenges of dealing with climate change are not the core competence of the defense alliance, it recognized its dangers as a “threat multiplier” at an early stage. As early as 2010, the final paper of the NATO summit in Lisbon stated that climate change and its consequences have the potential to significantly influence NATO planning and operations. At the NATO summit in Brussels in June 2021, for the first time, an action plan on climate change was adopted. It notes how climate change is making it harder for the military to carry on its duties. The action plan was drawn up by an international staff at NATO headquarters headed by Lieutenant Colonel Rene Heise. He illustrated the impact of climate effects on military-strategic planning and concepts using the example of a possible increase in daily maximum temperatures in North Africa and the Asian regions by ten degrees Celsius: “Can a soldier still fulfill his/her mission from a physical and physiological point of view or do we reach the limits here in the foreseeable future? Do our weapon systems and our technology work under extreme climatic conditions? What happens if the dreaded tipping points set and weather flow systems, for example, change abruptly?”.

For EUROMIL, as the European umbrella organization of military interest groups, the main focus is on the effects of climate change on the conditions of the military profession and the safety of men and women in uniform and the consequences for the design of missions, training and equipment. As global instability increases, it is foreseeable that the number of crises situations will increase. At the same time, the armed forces are more frequently called upon to assist civilian authorities in responding to floods or wildfires at home-country and abroad. In EUROMIL’s view, the deployment of soldiers for civilian tasks in emergency situations such as natural disasters or to contain the pandemic must remain the exception. It should not become the norm for governments to deploy military personnel because they are readily available.

Through active lobbying, EUROMIL contributes into adding the connection between climate change and defence capability to the agenda of political decision-makers. The umbrella organization has also joined the climate pact launched by the European Commission, with which the European Union is pursuing the ambitious goal of making Europe the first climate-neutral continent in the world by 2050.‎ The replacement of fuel tanks with electric ones, the recycling of military uniforms and the wider use of renewable energy sources could significantly reduce emissions from the military. The EU Member States should continue to collaborate in this area and collect and share more data in order to reduce greenhouse gas emissions, improve the efficiency of the military in missions and operations, and better protect soldiers’ health. EUROMIL also supported the call for a binding reduction in military emissions initiated by CEOBS at the climate conference in Glasgow 2021.

At an online conference in February 2022, EUROMIL President, Emmanuel Jacob, presented the results of a recent EUROMIL internal survey on climate change. There is broad agreement within the organization that EUROMIL, together with its partners, should get more involved in the discussion about climate change; 92% of the members spoke out in favour of it. Of the participating members, just under half, 44%, confirmed that their governments are taking steps towards the greening of the military.

A cooperation partner on the way to the common goal is the think tank “Global Military Advisory Council on Climate Change” (GMACCC), founded in 2009. In October 2019, EUROMIL organized a conference in Brussels together with several environmental partners under the topic: “The connection between climate and security: implications on the military – locations, operations and personnel”. Jamie Shea, former NATO spokesman and Secretary General of the GMACCC, underlined that climate change is a key national security issue. He also pleaded alongside the “responsibility to protect” for the notion of  “responsibility to prepare” because prevention, preparedness and resilience are often cheaper than the reaction.

From France, the Special Representative for the Indo-Pacific, Nicolas Regaud , reported on concrete steps taken by the French Ministry of Defense towards a “green defense” since the early 2000s. The  “eco -camp 2025” project is investigating how military camps abroad can reduce their dependence on energy and water supplies. In addition, studies worked on predicting the impact of climate change on the resilience of military bases in metropolitan France and overseas. Lieutenant Colonel Rene Heise suggested integrating all available climate and geographic data into capability packages in order to get an accurate overview of the deployment site. Big data and artificial intelligence can be used much more efficiently in the future. “When planning new weapon systems, all of these factors must be considered. In the future, location decisions will also depend on whether the local supply of water, food and energy can be guaranteed, in the long term. During their missions, which are often designed to last for years, the member states have to be guided by realistic global warming scenarios and coordinate them among themselves.”

Alternatives are in demand

Climate change is forcing alternative and future-oriented technical solutions – in the civil as well as the military area. Among other things, drive systems that have a high level of resilience and increased performance in the new climatic conditions are required. At the same time, emissions must be greatly reduced. It is probably an outdated view that spending on armaments deprives households of the means to invest in environmental protection, environmental rehabilitation and the energy transition. Rather, the growing awareness of the critical and complex situation opens up the opportunity for new military requirements, technologies and innovations to be forced and promoted also for civilian use.

Spain: Freedom of Expression and Neutrality of Military Personnel

EUROMIL participation at LMP Board Meeting