You are here:Home » Euromil News » The Role of Military Trade Unions in Tackling Discrimination in the Armed Forces 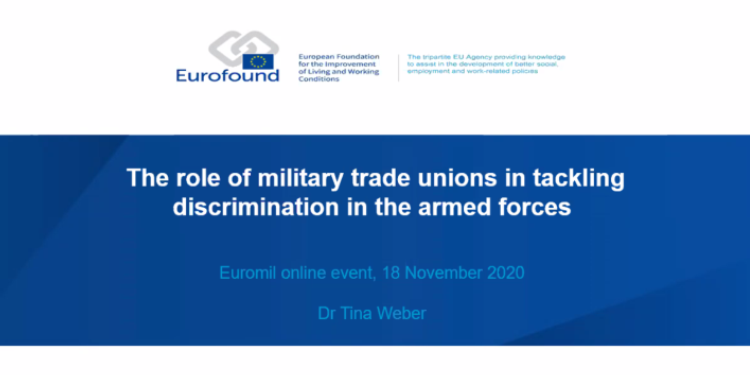 On 18 November 2020, EUROMIL held an online discussion on “The role of military trade unions in tackling discrimination in the armed forces”.

The principles of equality and non-discrimination are enshrined in international standards and legislation. At the European Union (EU) level, these principles are foreseen in EU Treaties and the EU Charter of Fundamental Rights. Through different Directives, EU law protects workers from discrimination on grounds of race and ethnic origin, religion or belief, disability, age, sexual orientation or gender. The European Pillar of Social Rights also recognizes the right to equal treatment and opportunities for all. However, despite existing international and national legislation and policies, many people continue to suffer discrimination at their workplace and in the wider society.

This awareness-raising discussion addressed the current situation with regard to workplace discrimination in the European armed forces and discussed the role of military trade unions in combatting them. Distinguished speakers shared best practices on social partner actions to guarantee equality, respect and dignity for all in the armed forces.

Tina Weber, Research Manager, Employment at the European Foundation for the Improvement of Living and Working Conditions (Eurofound) presented the report Eurofound recently published on the “Role of social partners in tackling discrimination at work”, which  concluded that social partners have a key role to play in combating discrimination. The author highlighted recent developments at national level and trends in the armed forces, where rates of experienced or observed discrimination are higher than in other sectors. Ms Weber addressed main challenges remaining in relation to workplace discrimination, namely stereotypes, low awareness of rights and obligations, shortcomings in the implementation of legislation and policies, difficulties around enforcement and sanctions and limited evidence. She presented the various activities of social partners in tackling workplace discrimination at cross-industry or sectoral level. This includes influencing legislative and policy developments, negotiating collective agreements, issuing guidance documents and recommendations, organising awareness-raising activities, monitoring and supporting individual court cases.

Ludovic Voet, Confederal Secretary of the European Trade Union Confederation (ETUC), emphasised that discrimination is an enduring issue. He welcomed recent European Commission initiatives in the field of equality as well as the opinion adopted by the European Economic and Social Committee (EESC) on Diversity Management in the EU Member States which underlines  “that collective bargaining and social dialogue are essential and that workplaces with a trade union presence are more likely to have in place inclusion policies and better anti-discrimination practices”, recognizing the crucial role of the social partners in this area. He presented concrete examples of actions taken by trade unions in the field of equality and non-discrimination across Europe, which encompasses training and awareness-raising activities, political agreements and dialogue, collective bargaining leading to collective agreements, and toolkits or checklists. Thus a lot of things can be done by trade unions, initiatives exist, but Mr Voet also raised the issue of sustainability and the need for support and funding. Initiatives must be sustained and this should come with the recognition that social dialogue has a positive impact on equality.

Comdt Gillian Collins, Gender Equality and Diversity Advisor, Human Resources Branch, in the Irish Defence Forces, shortly presented the origins of representation and consultation mechanism in the defence forces. She then presented the Diversity & Inclusion (D&I) Strategy Statement & Action Plan of the defence forces which supports a LGBTA Network Defend with Pride, a Women’s Network, examines religious diversity, builds relationships externally and develop relevant trainings. Ms Collins then made suggestions, namely to change mindsets and make people understand that the experience of every individual counts and to obtain this change, education is key. Furthermore, for staff representatives, D&I should be on the agenda and the agenda be pushed forward, teams should be diverse, communications should be done. D&I should be made a priority to bring transformative changes. There also representative associations have a role to play, in monitoring the impact of policies on the ground, on military personnel. To have an impact, a combination of top-down and bottom-up approaches are necessary.

Martin Sachs, Ombudsman at the Swedish Association of Military Officers (SAMO), underscored that despite achievements, there is still a long to go to achieve true equality in the military. Military trade unions thus play an essential role in tackling discrimination in the armed forces and can bring structural changes. For instance, in 2017 the #MeToo movement reached the Swedish armed forces, catching the attention of media and policymakers and making it a top priority. At the time there was a culture of silence in the military, there was not enough media coverage, armed forces had strategies against harassment but changing behaviour takes time, and the military is a male-dominated workplace. When the movement started, social partners did well. There was a firm message coming from a strong leadership. Government officials delivered strong messages as well as the President of SAMO, who requested actions for changes. A group was thus established to provide guidance to employees on discrimination and harassment, investigate cases, and ensure follow-up to prevent discrimination and “unwelcomed behaviour” in the future. Numbers are still high but show that the armed forces are going in the right direction. In conclusion, trade unions can educate and inform members on the issue of equality and non-discrimination; complaints must be handled in a timely manner, and offenders held accountable, more female should be recruited and hold high-ranking positions.

In the subsequent discussion, the issues of masculinity and intersectionality were addressed as being essential in the debate on discrimination in the armed forces. The issue of representation of underrepresented groups within trade union structures were also raised as well as the need to consider other possible forms of discrimination, such as the ones existing between ranks in the military.

The debate was moderated by Emmanuel Jacob, President of EUROMIL, who emphasised that it is time to change mindsets, break stereotypes and let people be who they are and who they want to be in the armed forces. Social partners should work together, hand in hand, to ensure equality, respect and dignity for all, in the armed forces.

The link to the video recording of the discussion is available here.

EUROMIL draws the following conclusions and recommendations from its experience and the present discussion:

As the European umbrella organisation of military associations and trade unions, EUROMIL promotes inclusive armed forces, not only as a matter of human rights, justice and equality, but also as a matter of operational effectiveness.