You are here:Home » Euromil News » The President of EUROMIL meets the Minister of Defence of the Slovak Republic and Opening Speech at the 125th General Assembly 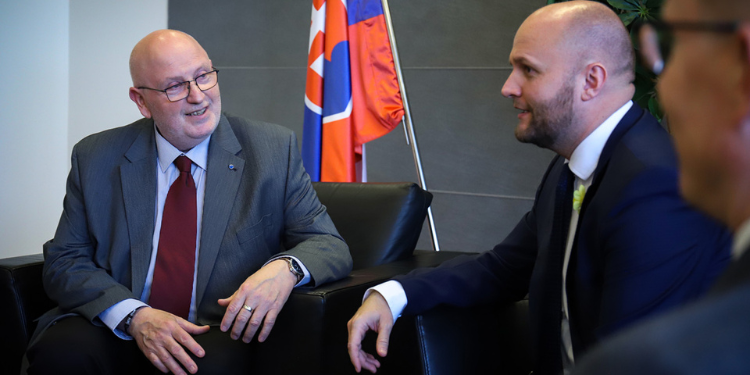 EUROMIL held its 125th General Assembly meeting on 29 April in Trenčín (Slovakia). The President of EUROMIL, Mr Emmanuel Jacob, had the opportunity to meet with the Minister of Defence of Slovakia, Jaroslav Naď, to discuss about military personnel’s rights.

The Minister highlighted that service personnel represents a high priority for the Ministry and in order to ensure that all rights and interests of military personnel are protected,  a Service Complaints Ombudsman for the Slovak Armed Forces to oversee service grievances is to be created.

Concerning the 125th General Assembly meeting, the President of EUROMIL at his opening remarks stated that on 2 October 1993 EUROMIL held its 65th Presidium meeting in Bratislava and despite that it has been 30 years many things have not yet changed; all invited speakers at the 65th Presidium agreed with the goals of EUROMIL and applauded the “Citizen in Uniform” concept and deplored that this concept was not implemented yet in all Western European countries. Anno 2022 and the discussion is still going on!

Besides, in 1993, Gen Skipalski from the Ukraine Officer association participated at the Presidium meeting and underlined that his country was constantly fighting for democracy; congruent with his statements “only a democratic Russia is a friend of Ukraine”.

But also, other topics that are still today on EUROMIL’s agenda can be found in the minutes of that October 1993 meeting. For example, the Spanish representatives from an organisation composed of women, informed about the lack of right of association in the Spanish armed forces. A topic that stayed many years on EUROMIL’s agenda and will surely be part of the 50 Year’s history.

However, the President highlighted that it is really important that we were able to hold the General Assembly meeting in person, despite the peculiar two past years. COVID-19 completely changed our lives and our daily habits, while we were afraid for our loved ones, and once again military personnel took on civilian protection tasks. Despite that the pandemic is not over yet, we are able to enjoy our freedoms and partially return to our “normal” life.

But it is not the same all over Europe, Ukrainian people are at war, their everyday life has been dramatically changed by Russia’s unjustified aggression. The determination with which Ukrainian people are fighting for their country has been an inspiration. Our thoughts are with all the citizens and soldiers who fight the aggressor. We, as EUROMIL, have taken a few actions to support them, donating supplies, financial assistance and participating at the ITUC – ETUC action for peace in Brussels.

Being in Slovakia for the General Assembly meeting, it is important to honour the Slovak republic as well as other neighbouring countries for their enormous humanitarian, political and military support to Ukraine. European citizens also deserve our appreciation and admiration for opening their doors to their Ukrainian fellow citizens in need of support.

But the crisis is not over yet. However, we need already now to be aware that we, that Europe, will have to deal with all kinds of consequences of this war. One of them will be the need for specialized mental health support. Many victims of this war,  both military personnel and civilians, from both countries will need specialized support to deal with, among others, post-traumatic stress disorder. Natasha Muscat from the World Health Organisation’s Europe region said: “this is a crisis on top of a crisis”. It is and will be a challenge to build up the needed resources and capacity. Just like military or diplomatic solutions that can not be given by one country alone, this also applies to the urgently needed mental support package, an approach without borders is essential.

The war also coincided with the adoption of the Strategic Compass for European security and defence. The heads of states and governments of the 27 EU Member States endorsed the document on 25 March 2022. Before the war, the draft documents did not include as many references to Russia as the final one does. In this regard, the EU expresses its support to Ukraine and highlights the threats that Europe is facing. Today, the world is returning in turbulent times, with Russia, China, climate change, hybrid and cyber threats to pose complex and interconnected risks. The Strategic Compass is a guiding document for the EU to navigate this world.

To provide a few examples. The Compass entails the creation of a Rapid Deployment Capacity of 5000 troops for stabilization, rescuing and evacuation missions, to be ready by 2025. Besides, the already in place EU defence tools will provide added value to European defence. The PESCO projects, as military mobility, investments in defence industry through the European Defence Fund (EDF), funds for third states and partners under the European Peace Facility (EPF) are just a few examples of the actions that the EU is currently taking. We, as EUROMIL, we welcome the adoption of the Strategic Compass and the further development of the European defence sector. However, we highlighted, and we will continue to advocate for the inclusion of social and working rights of military personnel and the synchronization of the European Armed Forces under EU framework.

To that extent, cooperation with partners and emphasis on military personnel’s’ rights under NATO framework represents an important pillar for EUROMIL. The upcoming NATO Strategic Concept will provide a context for NATO 2030. The alliance will expand its actions to different domains, from military capabilities and enhanced cooperation with the EU, to climate change and gender equality.

All these developments underline that 2022 will indeed be the year of defence, as it has been stated by the EU Council President, Charles Michel.

Besides 2022, also marks 50 years of the foundation of EUROMIL, 50 years of hard work to achieve equality between military personnel, and despite the successes we accomplished, we will continue working hard and supporting all the workers in uniforms for fair working conditions, social rights and equality.