You are here:Home » Euromil News » The Italian Opportunity to Introduce Real Trade Unionism in the Armed Forces! 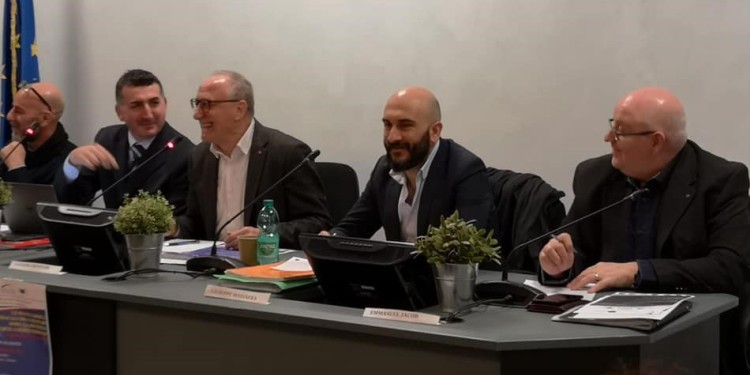 On 28 February 2019, EUROMIL organised in close collaboration with CGIL, FICIESSE and its longstanding Italian member association ASSODIPRO a conference on trade unionism in the Italian armed forces after the judgment of the Constitutional Court of June 2018.

Arriving in Rome on 27 February 2019 EUROMIL’s President Emmanuel Jacob delivered a first speech at the constitutional meeting of the Sindacato Italiano Lavoratori Finanzieri (SILF). This organisation was established further to the regulation adopted by the Italian Minister of Defence in September 2018, allowing military personnel to set up and join military associations with a trade union character. SILF is born from FICIESSE, an association with which EUROMIL has collaborated for many years and which will most probably continue to exist in parallel to SILF.

The conference on 28 February 2019 was opened by the moderator, Luciano Silvestri, from the biggest Italian trade union CGIL. He described the new reality in the Italian armed forces and highlighted the long struggle that has been fought by a number of individuals and associations. On his turn, ASSODIPRO’s President, Giuseppe Pesciaioli, described this long way in more details mentioning in an emotional way the efforts of amongst others Emilio Ammiraglia who unfortunately died before seeing the result of his efforts.

EUROMIL’s President Emmanuel Jacob briefly introduced EUROMIL and used the opportunity to mention the lack of an Italian national ombuds institution with competence for the armed forces. The lack of effective complaints mechanisms, coupled with a ban on trade union rights for military personnel, impede in Italy an effective protection of the human rights of members of the armed forces. In EUROMIL’s view, military personnel should be able to fully exercise their right to an effective remedy in order to speak up and prevent violations of human rights in the armed forces.

In Italy, after many years of struggle to achieve their legitimate aspiration, military personnel succeeded in having their voice heard. Unfortunately, this happened through several legal cases, because efforts to convince Italian political and military leaders to grant military personnel the right to freedom of association were unsuccessful. But it was finally the Constitutional Court in a meeting on 10 April 2018 in Rome that opened the way to a new form of military representation through its judgment number 120 of 13 June 2018.

“This judgment” Emmanuel Jacob emphasised “is, as I predicted already in April after the meeting of the Court, less clear than what most people think. It declared that military personnel should be able to form and join professional associations with a trade union character”. “Can someone give me the definition of an association with a trade union character?” President Jacob continued.

It is EUROMIL’s opinion that the guidelines approved by Minister Trenta only authorise Italian military personnel to set up associations with a trade union character, without enjoying the full spectrum of trade union rights. We admit that these steps constitute a breakthrough in the history of military unionism in Italy, but servicemen and -women are still far from exercising their fundamental right to freedom of association both in legislation and in practice. “To be clear, the Constitutional Court opened the door, laid foundations, but it is now up to the legislator to conceptualise, build and complete the rest of the building.” Emmanuel Jacob underlined.

Through several statements delivered by older and new associations, it became clear that the first steps are there but that a lot of work still has to be done. Meanwhile the Parliament has two bills on the table and conducts for the moment hearings to give several stakeholders the opportunity to express their views and comments on the drafts. Just before travelling to Rome, EUROMIL has been informed that its President will also be invited to address the Italian Defence Committee in the weeks to come. EUROMIL will use the experience of its member associations with longstanding trade union rights to inform the members of Italian Parliament and try to convince them to fill the gaps that have been left by the Constitutional Court.