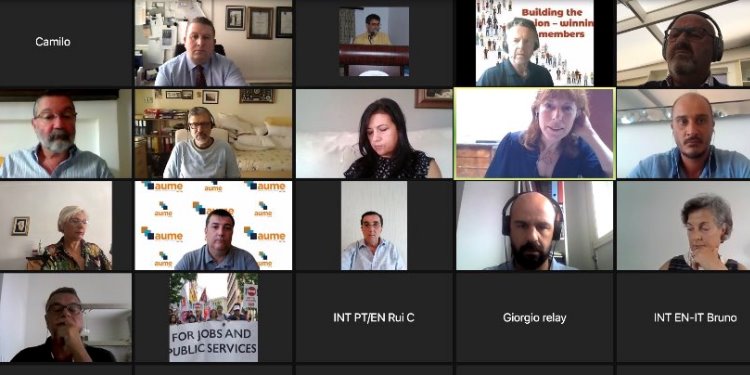 The first regional meeting of the EPSU, EUROMIL and EuroCOP project on strengthening and defending trade union rights in the public sector took place on 14 and 15 September 2021. The meeting assessed the current state of play, in particular regarding the transposition of the Transparent and Predictable Working Conditions Directive, in Cyprus, Greece, Malta, Italy, France, Spain and Portugal. Participants in the meeting included members of all three affiliates from the relevant countries, as well as other external impacted associations.

Richard Pond from EPSU opened the first day of the meeting by highlighting the importance of the event, in particular, the show of support between all three organisations and their affiliates.

The half-day session continued with a presentation from EPSU’s Nadja Salson on the role of EU sectoral social dialogue in protecting current and future trade union rights and EPSU’s ongoing legal case against the European Commission regarding information and consultation rights in central government and the Commission review of social dialogue. Ms Salson’s presentation assessed a number of points including the lack of a shared EU definition of social dialogue and its interpretation at different levels. The presentation also highlighted the importance for interested parties to be aware of the ‘toolbox’ that is available to them when challenging issues at EU level.

Following on from Ms Salson’s presentation, Alexander de Becker from the University of Ghent proceeded to give on overview of how the right to strike for public sector officials is organised in the abovementioned countries, as well as the transposition of the Transparent and Predictable Working Conditions Directive in these contexts. Mr de Becker’s research highlighted the different approaches, for instance the role of the constitution in Spain by which the right to strike is foreseen. Mr de Becker observed that in Italy, military personnel and police officers ‘are not considered as human beings having social rights’ and are instead ‘considered as part of the state and as identifiers of the state,’ allowing for the authorities to essentially ignore their rights as their employment relationship is not put forward.

An intervention from an Italian affiliate on the back of the presentation further highlighted that in Italy at least, there was a feeling of ‘hitting a wall’ and that the toolbox available at national level was lacking for military personnel. The lack of rights and tools available for military personnel was also discussed in the context of Greece, regarding the reports from early to mid 2016, before the introduction of a clear fundamental rights framework and legislation , of NCOs and officers subjected to disciplinary action and forced retirement for ‘daring to claim their rights.’

In rounding up the discussion of the first day, Ms Salson made a salient point regarding the concept of ‘essential worker’ and of the ‘citizen in uniform’ that should be given further attention by EUROMIL members regarding their expectations for the future. Do we want to extend the full scope of trade union rights to military and police personnel? Yes – but we cannot ignore the potential implications for other ‘emergency’ public servants and the risk of authorities designating ordinarily civilian roles as military, as has been the case in Italy.

On the second day of the regional meeting, Nigel Dennis of EuroCOP opened the session and Ms Salson again presented on some of the more pressing issues relating to the Directive itself. Most concerning in the Directive is the last minute amendments allowing for the possibility of the exclusion of public sector workers, despite the European Pillar of Social Rights not supporting this. Ms Salson gave a very detailed overview of the provisions of the Directive and the limitations and guidance within it. The most important message out of the presentation was, however, that it is absolutely essential that all relevant parties, and EPSU, EUROMIL and EuroCOP affiliates, engage with the authorities and get involved in the discussion on the transposition of the Directive at national level.

From the Spanish perspective, EUROMIL’s affiliates made the observation that whilst the available tools, such as the Charter, the Pillar and ILO Conventions will not exactly fix national exemptions of armed forces, they do offer a toolbox that can be used in an argument against differential treatment more broadly, particularly relating to issue of minimum wages.

Following this, Stefan Clauwaert, Senior Legal and Human Rights Advisor at ETUC provided a useful presentation on the legal strategies available to defend trade union rights and the importance of coordinating trade union interventions. Mr Clauwaert gave a detailed overview in the limitations and possibilities of the different available avenues. For instance, the European Convention of Human Rights remains a prominent tool for interested parties, however its formal and procedural nature must also be taken into account as well as the obligation to have exhausted all national procedures first. The European Social Charter, via which EUROMIL has submitted a number of complaints, was noted as a particularly useful avenue, considering the regularity of its national reporting system and of the possibility to submit collective complaints.

An overview of the ILO Conventions was also provided by Mr Carlos Carrion-Crespo, ILO specialist on public services and utilities, in particular regrading Convention 151 and its ratification. Interestingly, the Convention applies to the armed forces and police but although they are not excluded, authorities are still permitted to decide in what way personnel will be covered and protected. Furthermore, the Conventions cannot be used as an excuse to deprive either group of their rights if more favourable provisions are already in existence at national level. An important point mentioned by Mr Carrion-Crespo was the self-perception of both Germany and France in that they consider themselves as the main drivers in Europe, likely explaining their reticence in ratification.

Concluding the two day meeting was an invigorating panel discussion which allowed each federation to make observations on the conference debates and potential next steps. It was clear that the key issue for all is to monitor carefully the transposition of the Directive at national level and identify which countries have the tendency to make interventions in this regard. Regarding the specific interests for EUROMIL members, it was pointed out that fear should not be used as a means of preventing citizens to fight for their rights and that we should make it known that punishing military personnel for seeking better rights and freedoms has the potential to instil fear in other public servants too, forcing us to ask ourselves what the exclusion of military and police personnel means for all public servants more generally.

EUROMIL thanks EPSU, EuroCOP, and all participants for an engaging and stimulating discussion in what was only the first of a series of regional meetings in this important project, kindly supported by the European Commission.

For more information on the project please see here.