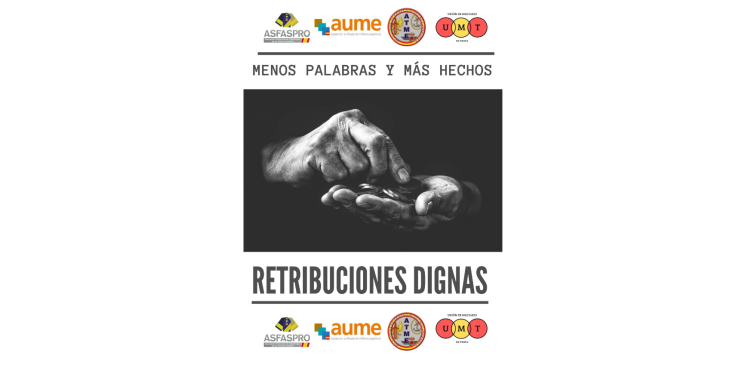 The Spanish military are called upon to defend their right to dignified remuneration. The protest demonstration is scheduled in Madrid, on Saturday, 19 September 2020. Professional military associations – AUME, ASFASPRO, ATME, UMT – have called to mobilization after a meeting of no effect with the Minister of Defense last month. In a joint statement are explained the reasons for adopting such an extreme decision. Military wages have not been updated for more than a decade, or in other words they are practically frozen since 2005. Moreover, it is assumed by all that wage structures for military personnel at the different ranks comparing with the rest equivalent categories of public employees is unbalanced to the detriment of the citizens of uniform. A situation always pending to be resolved.

Military life is a demanding and sacrificial one, and as such it is accepted by the soldiers on a voluntary and vocational basis and in fact they exercise their profession provided with a high sense of commitment to society and to the defence of the nation. The complexity of military missions requires from military personnel in all their categories – from enlisted to officer general – qualified education, continuous training and permanent availability, conditions that in any other field of work would have attached the corresponding financial compensation. The military have relatives that are also exposed to the enormous burdens involved in the daily performance of the military profession. This is obvious but often forgotten. The domestic economy and family reconciliation itself suffer because of continuous geographical mobility, expenses which must be faced without almost any social compensation.

All governments of the democratic period, regardless of their ideological orientation, praise the great work of the armed forces, the spirit of service of their members, the professionalism with which they carry out the permanent missions of national defence as well as the international operations, thus helping to streghen the image of the country abroad; Defence ministers, members of parliament, even the reports of the Observatory of Military Life, all concur in the same diagnosis of the need to dignified the salaries of the military; but it never reaches the perfect time to fulfill the task as promised. In the last years many studies and salary revision projects have been announced but they never pass this stage. By contrast, others components of the security forces, perhaps with greater lobbying capacity, have achieved well-deserved and long-awaited improvements. As usual, only the military remain.

Soldiers are the first to face crisis situations, as has been seen in the worst moments of the current pandemic situation. The deployment of military effectives in the Balmis joint operation and the intensive participation in all times of the  Emergency Military Unit – UME – has shown the qualify importance for Spanish society of having trained and committed armed forces to public service. However, when it comes to paying for their work, the military (and of course, their relatives) are always the last in line.

Professional military associations, which are mandated by law to defend the professional, economic and social interests of their associates, call for the mobilization of military personnel to defend against the government and before society their right of receiving fair and decent remunerations. The military is not asking for a salary increase, something unthinkable in a current context of socio-economic crisis due to the COVID-19 pandemic, but simply to recover some of the systematic loss of its purchasing power for more than a decade, and particularly to dignify the salaries of the lower ranking military.

Spain needs armed forces which are properly resourced – also in the personnel chapter – to ensure motivation for the demanding accomplishment of their fundamental missions. It is high time for the honorary recognitions for their work – always very welcome – must be accompanied by an improvement in the professional conditions of the military personnel starting with fair and dignified remuneration. And so will be demanded on 19 September.

In support of the planned demonstration, EUROMIL’s President issued a video statement.