You are here:Home » Euromil News » Promoting The Role of Women In The Military – Breaking Gender Stereotypes 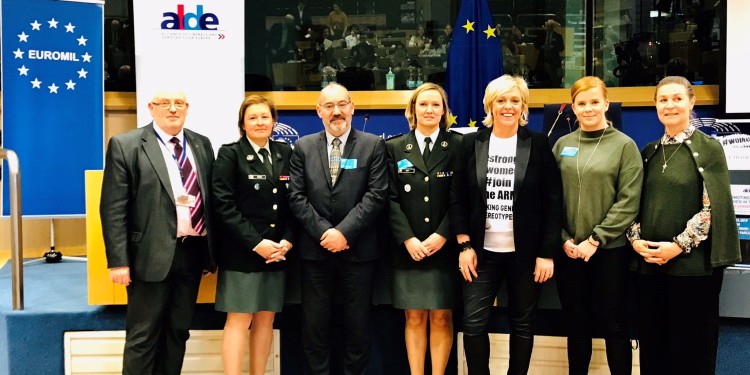 On 6 March 2019, EUROMIL, together with MEP Hilde Vautmans (ALDE, Belgium) hosted an event on “Promoting the role of women in the military – Breaking gender stereotypes” in the European Parliament.

In her opening remarks, MEP Vautmans set out the background and aim of the event. With women making-up only 3-18% of European militaries, change is urgently needed: Gender stereotypes about men and women need to be challenged, women need to be empowered to join the armed forces and mentored while serving, a zero-tolerance policy on sexual harassment need to be enforced. Vautmans concluded her opening by showing a video, which demonstrated powerfully how early on in life stereotypes are formed and what happens if you challenge them.

The panel was composed of military practitioners and experts in the field from different countries and organisations.

First, Ellen Hoft, Chief Warrant Officer of the Belgian Army, took the floor and shared some of her experiences as a woman in the armed forces. For her, serving in the armed forces is an experience which made her mentally stronger and – especially while serving in missions abroad – broadened her perspective. While she reflected that she experienced verbal harassment during her career, she also explained that it got easier to react firmly and stand up for her rights as she grew older and more experienced.

Second, Katrien D’Hert, Chair of the NATO Committee on Gender Perspectives, took the floor. She explained that NATO has different civilian and military structures dealing with gender perspectives. From her military point of view, she assessed that leadership commitment, internally and externally, are crucial to establishing gender equality. She advocated for embracing a gender-neutral philosophy, in which men and women are treated equal, assessed for the qualities and qualifications, with no regard to their gender. D’Hert also expressed her belief that with the 20th anniversary of the UN Security Council Resolution 1325 coming up, it might be the moment to step back and see what has been achieved so far: instead of ever widening the scope, she suggested to start deepening the work on women, peace and security.

Third, Daniel De Torres, Assistant Director and Head of the Gender and Security Division at the Geneva Centre for the Democratic Control of Armed Forces (DCAF), took the floor and elaborated on what he sees as the underlying problem. To him, we need to go beyond stereotypes and have to ask ourselves what the archetype of a soldier is. In doing so, we will find that most of us still see a strong, muscled man as the archetype of soldier; with requirements that many women will never be able to meet. Especially in today’s world were military personnel needs a completely new skill set, it is high time to not only open the door to women, but to actively invite them to join the armed forces, making full use of diverse potentials and skills.

Fourth, Elina Meyer, Deputy Ombudsman of the Swedish Association of Military Officers, took the floor. Reflecting her career in the Swedish armed forces, she said that it was both, the best and the worse time of her life. While she personally grew enormously, she also experienced harassment because of her gender. However, reflecting the Swedish legal context, she said that all rules and regulations to prevent sexual harassment and to foster gender equality are in place. What is now needed is a change of the deeper-routed norms, attitudes and values each and every one of us carries.

Fifth, Charlotte Isaksson, Senior Gender Advisor, European External Action Service (EEAS), took the floor. She explained that all societies hold deep believes over qualities which are believed to be more female versus qualities which are attributed more to masculinity. The different values attributed to those qualities can be used and misused in manifold ways. While making sure that armed forces better reflect the society, we need to be conscious not to reinforce gender stereotypes when recruiting and deploying.

Sixth, Rory Keane, Head of Office UNLOPS (United Nations Liaison Office for Peace and Security), took the floor and elaborated on the work of the UN in this regard. One of the major priorities for the UN at this moment is to increase the number of women in peacekeeping which currently is at 4%, for mainly two reasons. First of all, gender parity is an end in itself. Secondly, it’s a matter of effectiveness and legitimacy. The most important “tool in the UN’s toolbox” is the legitimacy of its actions, so if a peacekeeping force is not reflective of the make-up of the world, it is losing its legitimacy. Concretely, Keane reflected the need for female leadership and role models as well as a working environment in which both, men and women will feel comfortable.

EUROMIL President Jacob chaired the Q&A session in which different topics were raised by the audience and the speakers. The importance of accurate and precise language and terminology was discussed, as well as the importance of statistics and concrete measurements to fact-check arguments. The possibility of general conscription as well as a reserve system to attract more women to the armed forces was also discussed. Participants highlighted that while men and women should be treated equal, we have to acknowledge that they are not identical, in this respect the issue of transgender people in the armed forces was touched upon. It was referred to a side event to the NATO Committee on Gender Perspectives which EUROMIL will co-organise in June this year.

President Jacob closed the debate, emphasizing that promoting the role of women in the military and breaking gender stereotypes is a shared effort: it needs the support and commitment of women and men, it needs to be supported top-down but also implemented bottom-up, it needs incentives from international organisations, but also local staff associations and personnel on the ground need to take ownership and move the agenda forward. He also highlighted that diverse and inclusive armed forces are not an end in itself. Diverse and inclusive armed forces are better reflecting the society they serve, more effective in the fulfilment of the diverse tasks required of armed forces today and a better working environment for all employees.